Joe Torre. Damned if you do... 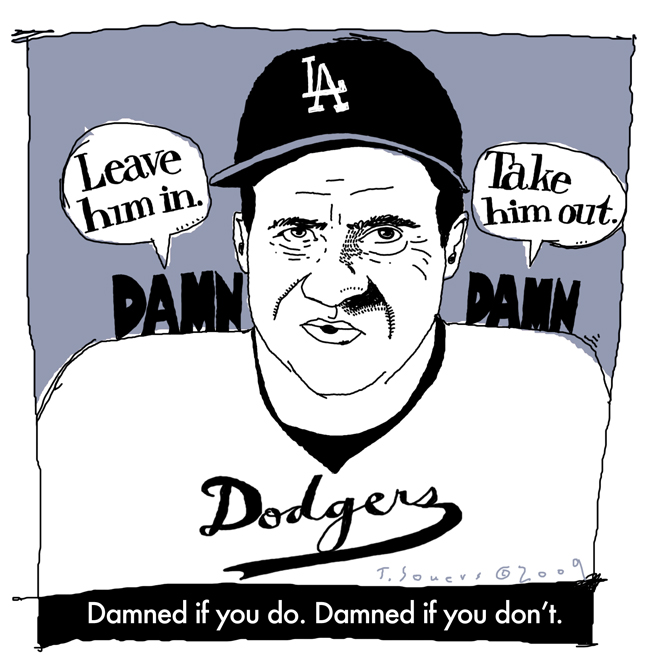 Joe Torre decided to leave Clayton Kershaw in the game after he, well, he did alot of bad stuff in that 5th inning. Before he was done Young Clayton had walked 3 batters and threw 3 wild pitches and gave up 5 runs.

He faced 8 guys total, and maybe somewhere in there you might argue that Joe Torre shoulda given him the hook, but he didn't. Because he believes in the kid.

Not the exact situation, but I immediately thought of Lou in 2007 when he yanked Big Z and put in Marmol. A big time manager decision in the heat of battle that, had the Cubs won and Big Z starts game 4 rather than Jason Marquis, everybody woulda been pretty happy.

Didn't work out, Lou gets crucified in the press, which adds another layer of panic and dread, which I'm happy to say is happening right now in Los Angeles.

Bill Plaschke is a super talented sports writer - whenever I'm out there I always read that guy - but while he's certainly doing his job this is just the kind of thing that widens cracks. And if you're like me and are kinda holding a grudge against the Dodgers for so handily bitch slapping the Cubs out of the playoffs last year, you should be happy too.

Manny with a dinger but also leaving a number of guys on base.

Meanwhile in Chicago, there's talk of getting a "name" hitting coach.

I gotta tell you, at this last Cub convention I got to see the funniest and most honest exchange between an angry fan and hitting coach Gerald Perry. This isn't exact, but essentially:

FAN: Why don't you tell Soriano to lay off those pitches that are 50 feet outside.

PERRY: YOU tell him.

OH yeah. I admit it: when Raul Ibanez hit that homer, I yelled "SUCK IT, DODGERS!". And then my cats ran for cover.

And then I remembered: we could have got Raul Ibanez instead of Jenga couldn't we? That was the guy?

Anyhow, now if the Angels could kindly dispatch the Yankees...

I couldn't help but laugh when I saw the Dodger fans take their seats and sit their quietly after the game went up in smoke for them...Ha! And after that Manny homer they thought they could win...oh it felt good to see otherwise.

The Yanks/Angels series should be very good baseball too...lets hope we get to see the Angels win it all.

Raul looks a little Freddie Krueger-ish.
But damn, what a swing.
There were a number of guys we coulda got instead of Jenga.
I'm going to Walgreens for tums now.

And what was up with Manny's bad ass stare into the Phillies dugout?
What a giant cock.

Dancing with the devil...that's what Mannywood is doing right now.

I lived out in So. Cal for 15 years. I went to a lot of Dodger games, listened to Vin Scully and read a lot of Plaschke (genius) and T.J. Simers (moron). And I liked the Dodgers as my 2nd choice to the Cubs all those years.

They had a certain “Dodger Class”. Cool stadium with palm trees. Nice blue and white uniforms. And my boyhood Brooklyn Dodger adoration (pre-Cubs) was hard to forget.

And like so many teams, they also signed their share of assholes. Most notably, they signed Darryl (sniff, sniff) Strawberry. And they signed Meltdown Bradley (who hasn’t?). But it never worked out for either of those guys. They each had an OK first year before they self-destructed. And they each left before they had a chance to cast a spell over the fans or the LA press.

The Dodgers’ front office didn’t give up. Their next assault on Dodger Class would be a frightening blend of Strawberry’s unlimited offensive skills (and his drug problems) combined with Meltdown's brooding, unbalanced, me-first view of the world. That blend would be one devil of a ballplayer...

Their devil now plays left field for all of fawning Mannywood. And I guarantee you, they’ll rue the day when they replaced Dodger Class with a Dodger Ass.

Yeah, I saw that...he's such a douchebag. Ugh, and a disgrace to baseball.

Things I do not need to hear and/or are oxymoronic when it come to Manny Ramirez: "giant cock".

His acting like a giant cock is the only thing giant there after the steroids, possibly...