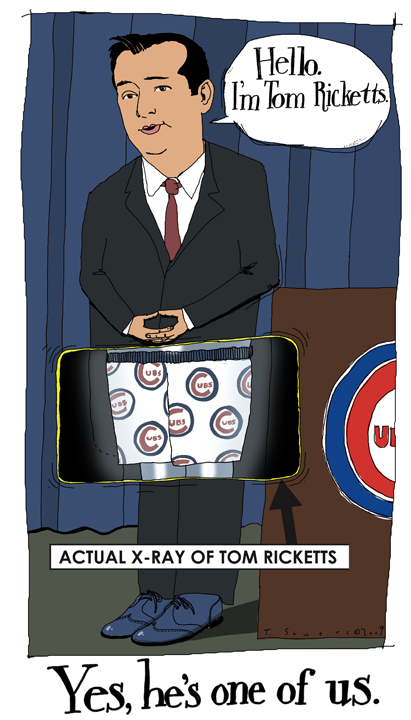 Actually, Tom's the chairman of the board that includes his sister Laura and brothers Pete and Todd - a kind of College of Owners - and yesterday they spoke in that role for the first time.

Here's a word I don't often use to describe my feelings towards the owners of anything: I'm enchanted.

I'm sure you read everything they said yesterday. The part about getting "sucked in" to Cub fan-hood and there's "no getting out", the part about no hidden agendas and not a lot of moving parts, that simply winning is the #1 goal, the part about their obvious love for Wrigley field, and lastly that part about winning the wuh..wuu..worrrl..wrrrsssssssrrrreeeeeeeeeesss.

That last part's always been hard to say out loud.

But you get the feeling that these Ricketts guys (Laura, I always call everybody "guys"), they've had the same feelings of heart-attacking, brain-pulping, hope-crushing anguish that you and I have had for ohhhh, ever.

And while you and I can wear "Cards Suck" t-shirts or blame the goat, these guys can actually do something about it.

Remember last year? The Halloween post was all about the horror of Sam Zell.

How awesome is this year?

Joe Buck's head is shaped exactly like a baseball bat 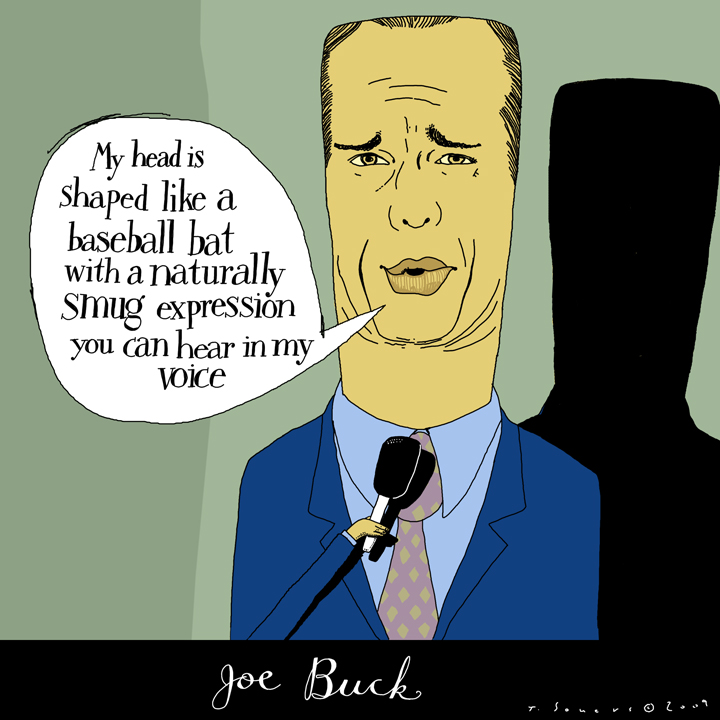 You know, last night was just an awesome game complete with giant homers and out of this world pitching, but when it was over I felt like I'd just watched a turd.

The game was tarnished by some close but wrong umpiring calls made worse by the giant deal Joe Buck and Tim McCarver made of them. And if I think about it for a minute, it's really television trying to force me into an opinion I'll never take - that baseball needs instant replay.

Everyone's piling on the umpires this year. Of course they brought most of it on themselves, but... You saw the close calls at first with the trap by Ryan Howard and the missed "safe" call on Chase Utley right? How could you not - they replayed it enough. After the first replay of the Howard play, we immediately heard "oh, bad call". Then a couple more replays and finally the incredibly fuzzy blow-up of the ball in super slow mo going into Howard's glove. Yep, he trapped it. Now the game is tainted.

To their credit, they acknowledge that while there have been some truly awful calls during these playoffs, this one doesn't fall into that category. But that only illustrates what I'm trying to say - why did they make such a big deal out of something that should have just been another play?

Both of these plays were exactly the kind that make baseball so compelling and human and watchable. Both were so close that had they been called "right", the other manager had every right to go out and argue. If they didn't have a million hi def cameras everywhere, these would just have been close plays in a baseball game. The kind of thing fans get to argue about over a beer at a pub. Instead, it's news. Instead of walking away thinking about what a great game AJ Burnett tossed, I walk away thinking about bad calls.

You know how much I hate the idea of instant replay in baseball. Here's a pretty good piece about it at Outtatownclowns's Blog.

Anyway, besides all that, it really was a great game. I found myself pulling for the Yanks early because I so wanted Zim-tossing Pedro to get shelled. Then when he got knocked out (couldn't believe Manuel had him stay in for the 7th), my anti-Yankee instinct took over and I started pulling for the Phils.

But the funniest part of the game was when Joe Buck called Burnett "Beckett". Not just once, either.

And just so you know the Cubs are still top of mind, here's a quote from the WALL STREET JOURNAL: "Besides the absurdly long games and the absence of the Cubs, there's one thing you can count on when the World Series rolls around: Joe Buck and Tim McCarver will be chatting away during the TV broadcast."

Okay... today the Ricketts' are supposed to introduce themselves to the media. Here's hoping they can be the ones to make the WSJ joke go away. 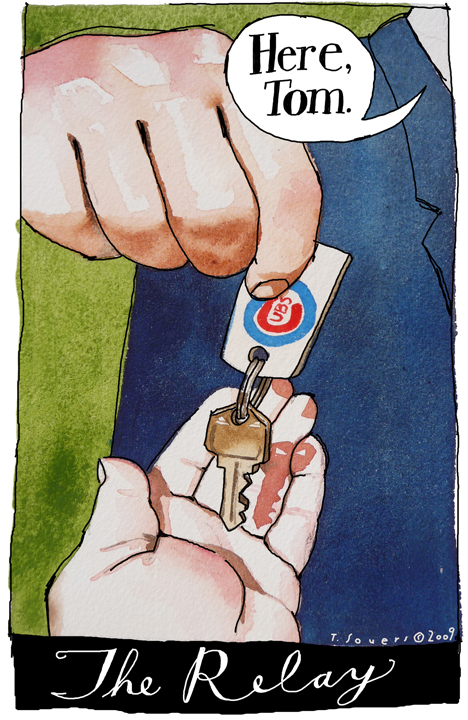 October 27th, 2009. The day the Ricketts family finally actually for real took ownership of the Chicago Cubs. I could not be happier for our team to be doing something that feels so correct, wonderful, and necessary.

Of course, it's also the day we can say goodbye to Sam Zell who I'm sure, as far as history goes, will be remembered right up there with ohhhh, rats at Wrigley.

So it's Tom as chairman, brothers Pete, Todd, and sister Laura on the board along with one chair reserved for a Tribune guy. I won't bring up a certain Chicago football team family ownership that includes less than desirable siblings, I just hope the whole fam is as big a bunch of Cub fans as Tom.

Everyplace I went to read about this happening, people are giving advice to the newest Major League Baseball team owner.

How's about this: Tom, keep being a fan.

That's about all I can ask.

Well, it's not like Pete Rose being named manager or anything.

Oh come on! You can't help it.

You think it, I think it. Mark McGwire didn't want to talk about the past, but what are we supposed to talk about now that he's back? Is that all just gonna go away? Now that he's the Cardinals' hitting coach?

It's actually kinda funny. Like a Peanuts strip with Pigpen teaching laundry. An ethics class with professor Rod Blagojevich. Or Steve Phillips teaching...ah you get it.

In reality, it's probably a good thing. Kind of like the ex-prisoner guys who scare you straight? Because, and I know the innocent until proven guilty thing, but because of his whole experience with...you know...he's probably pretty much totally against that now, wouldn't you think?

He never did actually get caught doing anything illegal, right? So I shouldn't say anything. I'll just shut up.

But my cub fan eyebrows sure shot up when I heard about it.

Hey I almost forgot, the Yankees beat the Angels, did you hear? Not that the Angels were wearing their Error Jordans or anything. Yeah, it's the Phillies vs the Yankees in the World Series.

I gotta say, this whole 2009 playoffs thing has been alot like watching "Lost". I know that show's not over, right? I mean, I'm still waiting for the end or something, if only I could remember what happened the last time it was on.

These playoffs feel like they've been going for ever, is what I mean.

I guess I'm pretty happy the end is near. 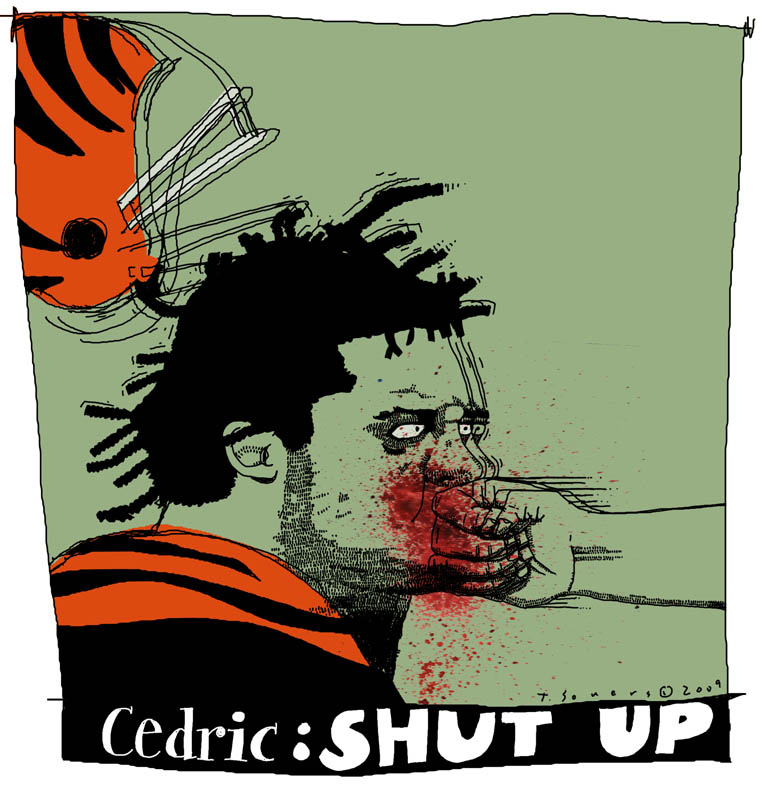 Read David Haugh if you haven't already, guys. Cedric Benson's spent the week talking about his former employer, and he's got some accusations that'll make your blood boil. Hey, Ced - I'm just a slob on the couch with a pen and some ink. Wait til you see the opinion of the Bears' D.

We all watched this clown live down to the worst expectations while here in Chicago. Right down there with Cade McNown.

This afternoon it's the Chicago Bears vs. the Cincinnati Bengals. I cannot wait for this game.

Watching the 9th inning of game 5 in an Angel bar We had a looong day working, and got to go into this fabulous little beach bar in Venice Beach. Can't remember the name, but it was supposedly vaguely famous because Jim Morrison had peed on the bar way back when.

Now, my general impression of California is they care alot about college football, not so much about baseball. But when we walked in there, not knowing the score or anything, you could feel the tension in the air. They had 3 pool tables and not a single one in use. Top of the 9th, Yanks up to bat, and honestly I don't know all those players, but the Angel reliever had somehow let the bases get loaded. As that was happening the bar got more and more quiet and seriously, it was pretty cool. Like walking in on something private and important and just being able to look in from the outside.

Nick Swisher popped out to leave the bases loaded and there was an audible sense of relief. Music started and everybody got another beer. Angels beat the Yankees 7-6.

I was glad to have seen the passion in this tiny bar.

I also fully expected the Yanks to pull it out. Still do. But that was pretty fun.

Tonight they're back in NY for game 6. I'll try catch it back here in Chicago.