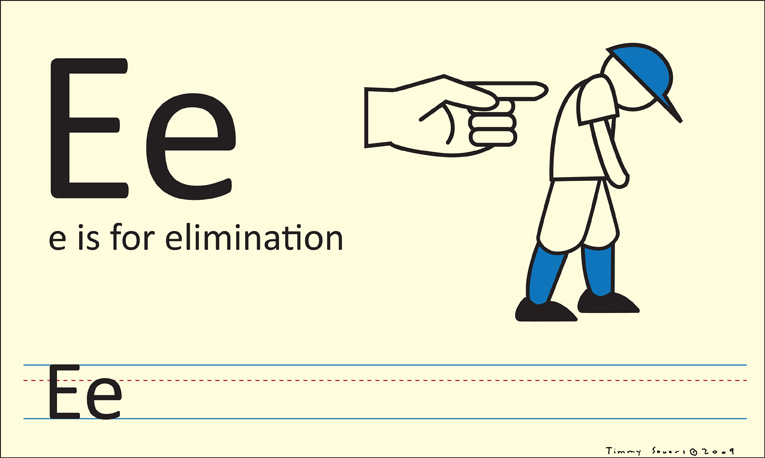 If you go to MLB.com wildcard standings, you'll see that today there is an "E" behind the word "Cubs".
It doesn't stand for "error".
It's not a vitamin.
It's not a class of Mercedes Benz.
It means "eliminated".
Yesterday, there was a "1" behind the word "Cubs".
Yesterday, the "1" was an "elimination number".
Here's what an elimination number is (quoting from above link):
The Elimination Number for any team is determined by adding their number of losses to the number of wins for the team leading the wild card, and subtracting that total from 163. The Elimination Number for the second place team is the "Magic Number" for the first place team. "E" indicates that the team has been eliminated from winning the wild card.
Yesterday, I couldn't bring myself to do that simple math.
Probably because I already knew disaster was about to happen.
Luckily, we've had a little time to prepare for this, the first time in 3 years the Cubs did not make it to the playoffs.
Last night, Ryan Dempster showed he's still going strong - he threw a 9 inning shutout against the Pirates.
Final score Cubs 6.
No comment on the quality of players the Pirates had on the field last night.
Lets just say Ryan was brilliant.
Today...man if you had the day off what a day this could be.
A doubleheader with Terrible Ted and Carlos Zambrano.
So, you know, hang in there.
There are still 6 more games.
Meaningless?
Nah.
Turn on the radio and listen to Pat and Ron.
Turn on the tube and look at the park.
Watch Sam Fuld make a serious run at staying in the Bigs.
Keep that all in the back of your mind til next Spring.

As the Cubs season nears an end... 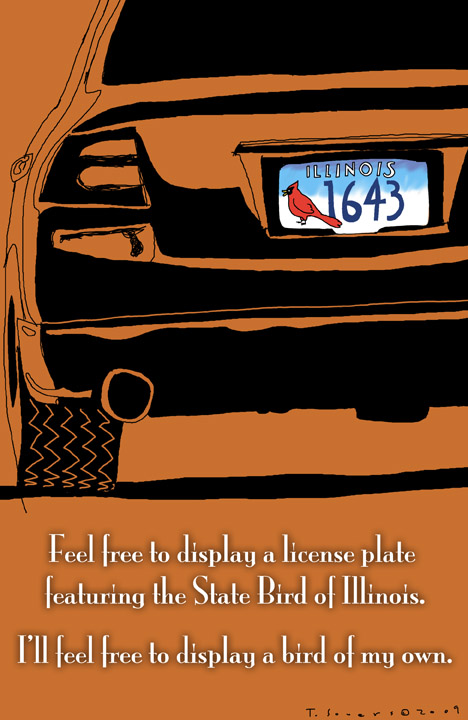 First off, what dipshit thought of putting a cardinal on an Illinois license plate?

Or maybe I should ask about who chose the state bird?
What was wrong with the noble robin, the humble sparrow, or maybe a bat?
This is like calling The State of Washington "The Land of Lincoln".
I guess I should be happy there's no Illinois State Sock - surely it would be white.
As this season winds down to an end, I guess all I can say is - here we went again.
Lucy held out the football and we all went flying when we tried to kick.
Next year, it's gonna be one hundred and two years since the Cubs last won a World Series.
Until 1962, each season was 154 games long and then it changed to 162.
So lets see, that's 54 seasons at 154 plus 47 at 162...
At the end of 2009 the Chicago Cubs will have played 15,930 games without winning a championship.
God.
Why did somebody put a calculator on my computer?
Tonight the Cubs play their final homestand of the season - 3 games against the Pirates and then 3 vs. the Diamondbacks.
Remember at the beginning of this year?
I thought the drama would have just ended, the Cubs would be sitting pretty and we'd be thinking about resting some guys for the playoffs.
Instead, I'm writing a post about being pissed off about license plates.
This will sound wacky coming from a guy who apparently hasn't learned from a lifetime of watching the Cubs, but I do believe people learn.
I believe that Lou Piniella and Jim Hendry won't think so much of a batting order that goes lefty-righty-lefty throughout - that if a guy can hit a guy can hit and that's who you play.
I believe we won't see an obvious malcontent become a Cub next year - that management realizes maybe there is something to this "team chemistry" thing.
And finally, I would be shocked if we ever see Aaron Miles pinch hit in a clutch spot for the Cubs ever again.
So for all the talking going on right now about Lou not being around next year, and to those who wish Jim Hendry would go away, I say this horribly twisted year should just be a giant mulligan.
I think Lou Piniella is a proud man, and way too proud to leave his job in this state.
I also think Jim Hendry has an ego from here to Mars, and that's a good thing.
Those two have been responsible for 2 NLCentral championships together, and I think they have one more in them.
We also have a new owner.
Yeah, the fat lady ain't sung for this season yet, but I'm already thinking next year...
It's gotta be better.
Now Ryan Dempster, get out there and beat those awful Pirates.
I've got 6 more Ron and Pat games on Emily's radio.
Make 'em good ones.
Another version of this illustration is in the current issue of VINE LINE. 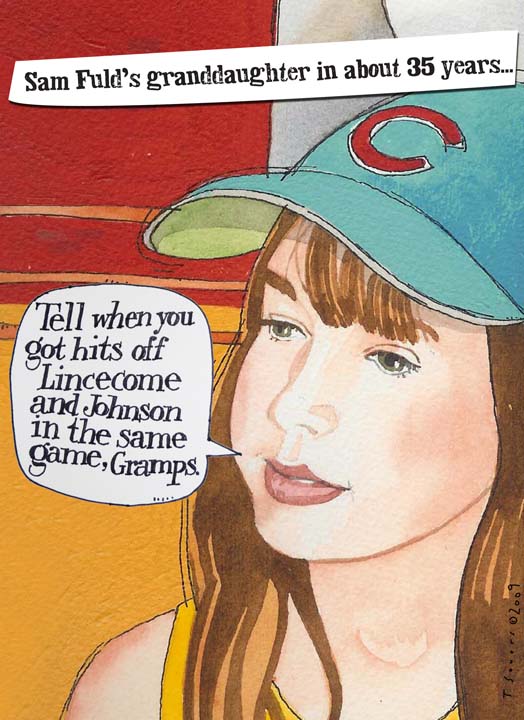 The other night when Len Kasper pointed out that Sam Fuld had gotten hits off Tim LIncecome and Randy Johnson - two Cy Young award winners - in the same game I just thought wow.

That's one for his own personal diary, right?
Friday night's game was SUCH a great one to watch, and not just because it lasted only 1 hour and 56 minutes and ended relatively early.
Carlos Zambrano finally showed up, with a couple weeks to go in the season, and pitched his game of the year.
A 2-hit 9-inning shutout.
I think all the trade talk got his hackles up.
He wanted to show us that he's as good as this kid from San Francisco.
But he was better, especially with the bat.
And Saturday afternoon, well you can see the guys are just playing pretty loose.
It looks like fun.
Like it hasn't looked all year.
The more I think about it, and if it's fair or not won't really matter, but Milton Bradley is sooo gonna be remembered as the scapegoat of 2009.
(And I'll happily continue to pile on.)
They beat the Giants and Barry Zito 6-2, with Tom Gorzellany looking like he might really be a Cub next year.
Aramis hit one out, Jake Fox knocked a couple in...
Jake Fox now has 43 RBIs and 11 homers in 77 games.
Anyway, the Cubs are keeping your interest at least a little, right?
Kinda fun.
Who'da thought anything about fun, even a week ago? 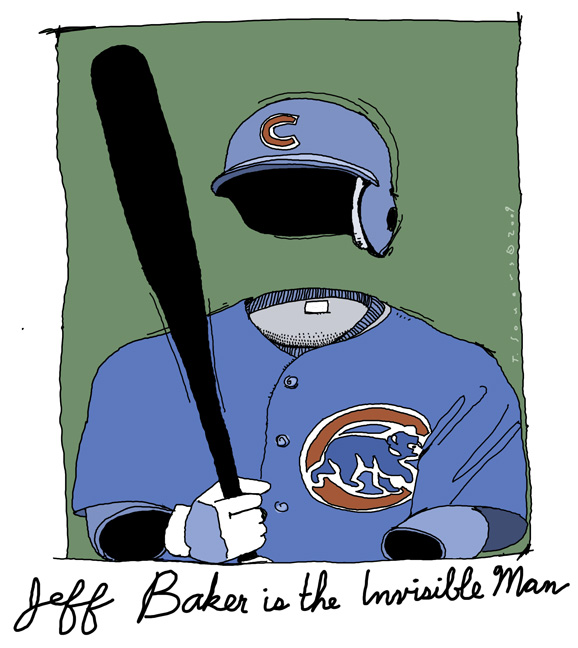 How about that Tom Baker?

Coming through with the big clutch 2 run homer to take the lead in the top of the 9th, and the Cubs hang on to beat the Giants.
But what nickname should we give Bob?
"Invisible Man"?
"Generic Man"?
"John Doe"?
Bill Baker looks and moves like a plastic baseball player - like he might have been the model for the MLB logo or something.
If he had a theme song it might be "Happy Birthday" or "The More We Get Together".
Let's look into his past.
Jeff Smith came from Colorado, where in his last season there he had 299 at bats, 80 hits, 26 walks, all for a .268 average.
Average.
Maybe "Average Man"?
Well, this year, he's hitting .306.
Not bad, Mr. Smith.
How's about "Slightly Above Average Man"?
Probably if he wasn't playing baseball, I'd cast him as an insurance guy or somebody who works in a rental car place.
This one time I rented a car, and they gave me a gigantic Lincoln Towncar because they didn't have the tiny thing I was supposed to get, and I totally backed into this post...
Wait.
What was I talking about?
Oh yeah, Frank Baker.
Anyway, congrats on the winning homer and keeping the Cubs alive for another day, Todd.
I think they said that was a 97 mph fastball you cranked out.
In the meantime, we'll think up a nickname for you.
;)
Go Cubs. 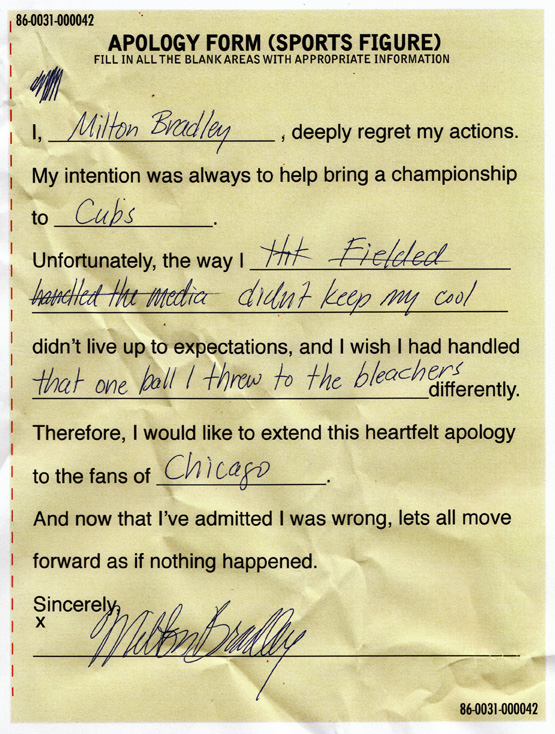 Am I piling on? 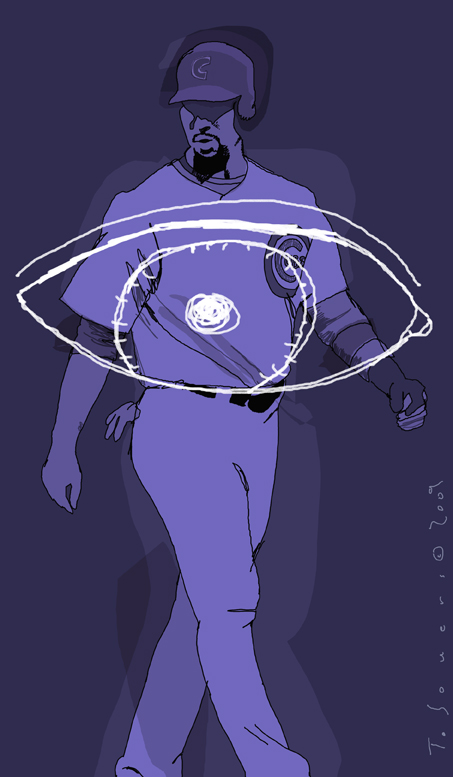 I don't think later I'm gonna spend too much time sifting through the embers of 2009, but Derrek's season will definitely be something to savor.
His consistency, reflected in his personal best (so far) 109 RBI's, never wavered.
All season long.
Even with the diseased clubhouse - how do you keep your focus?
Last night he hit his 39th homer, and it went out by a couple feet over the right field wall.
So much about him can be defined in that hit - he's hit some monsters, but I always think of him as a super-intelligent batter, going with the pitch and (as he's always said) not trying to hit it out, just make good contact.
Sometimes they go out.
So...better luck? The wrist absolutely, 100% healed? Wheaties for breakfast?
I don't know, but I'm gonna watch the rest of this season to see that swing.
How about that Tyler Colvin catch?
Ho hum, I'm just a kid up here for the first time and well, take THAT Ryan Braun.
Like it was nothin'.
I feel for Reed and Sam, since Tyler's probably gonna get most of center field for the rest of the year.
But any talk about Tyler being the starting center fielder next year?
Lotta weird stuff's gotta happen before I can think like that.
Randy Wells got his 11th win in his rookie year.
The Cardinals' magic number is 2, and the Cubs remain 7.5 games out of the wild card.
But again, 11 more games to watch D. Lee.