« Cub Fan Pulls Off His Own Head! | Main | Cubs should take advantage of Cash For Clunkers » 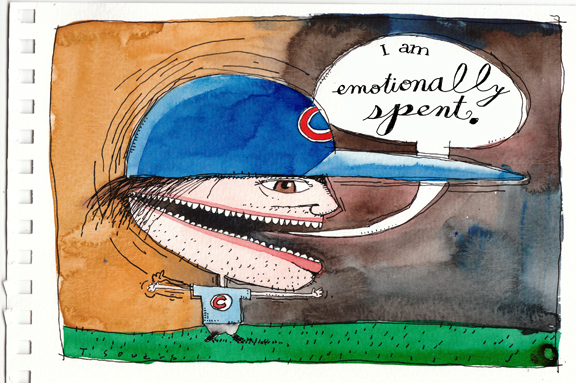 Don't know about you, but I'm kind of a dried out husk.

Awesome that the Cubs beat the Pads 7-1 at Petco last night.
Awesome that Rich Harden looked so good and everybody got a hit.
Awesome that I am drinking coffee like normal.
But for about the last 7 days I've been walking around with big veins sticking out of my neck.
I don't notice 'em today.
This shouldn't have been hard, this last SD series.
It would have been so much more fun to go to Los Angeles with a glimmer.
Sorry to be Captain Bringdown, but daaaaaaaamn.
Okay.
Gonna lower my expectations even further than I had 'em.
Maybe there'll be something funny down there.
What's up with Milton and the hand gestures to the crowd?
I wasn't gonna say anything, but I heard bleacher people saw him doing that at Wrigley too.
Tonight it's Gorzelanny against Jeff Weaver, who appears to be about a hundred.
Here's a story from Wikipedia:
"In August, 2003, ebay member "freerangeveal" attempted to sell Weaver on eBay. The auction appeared the day after Weaver gave up 11 runs against the Kansas City Royals. The auction lasted for one day, and the bidding reached the ebay limit and record of $99,999,999.00 before it was removed as against eBay policy."
Didn't know that one.
I just moved offices.
I'm now next to a guy with a giant Cardinal logo on his door, Jay.
He's always in a great mood lately.
What a jag.
Last thing.
I got on Twitter.
I don't actually tweet, but when I post a new one it automatically tweets that out.
I also don't have many followers, but I can tell you that judging from some the ones who do, I am prettty dang hot with the ladies.
You can click on who's following you, and usually there's a photo of a hottie in a bikini.
Pretty flattering they'd just send a shot like that, right?
And the messages?
"Add some spice to your liife and find some new sex partner"
"That's my problem. I'm addict to sex."
This morning, got a new one: "I don't care if you drive a PINTO or a FERRARI. If you know how to treat me right."
I guess maybe with that one, she's probably got the wrong guy since I don't drive either of those.
But you can really see the value in this Twitter thing.

You may be Capt. Bringdown, but it's an improvement from yesterday's post when you were Sergeant Sarcastic.

Or Corporal Caustic.
Or Colonel Contemptuous.
We could come up with a whole new Military here, Mark.

Hand gestures: that was Milton giving back to a very loud heckler. As in yap yap yap.

I'll try to find you on Twitter. I friends locked my entries and I still get those spambot whores trying to follow me.

Yup, my expectations vs. the Padres were SO high, but now they are even lower too. I'm not expecting much from them, but we'll see...

I was happy to see Bradley hit that one out and yeah, like DB said, it was toward an annoying ass fan that kept harrasing him...he also said something to Rami, and what did Rami do? Yeah, hit one out! So, he helped!

Hand gestures aimed at heckling fans? Is this what our season has come down to? We can do better:

- Maybe we could get Lou to moon the writers at the next post-game post-mortem?

- Or maybe we could have Soriano ride a billygoat out to left field and them let him munch on the ivy?

- How about having Z doing a flip onto the mound off a trampoline next start?

- Ryan Dempster could do a barefoot fence-vaulting exhibition?

- Our new closer, Carlos Marmol might try to throw a strike against Yao Ming?

- Or, best of all, Sam Zell could roll around naked in a vat full of $100 bills, laughing maniacaly...

I'm spent on this team. I was contemplating getting tix to 1 or 2 games just because... after Lou's bonehead call of putting Miles in for Gorzelanny, I've changed my mind.

That's all I have to say.

I guess I never expected the season to end this early...

Well, even if it's over, it's still baseball.
I'm already thinking about how much I'm gonna miss it.
The game last night - after Gorzelanny settled down it was kinda...pleasant for a little bit.
Then that horrid Alfonso at-bat when they walked the bases loaded with only one out.
And yeah, the kicker was Aaron Miles.
See today's post.