Cub Fan Pulls Off His Own Head! 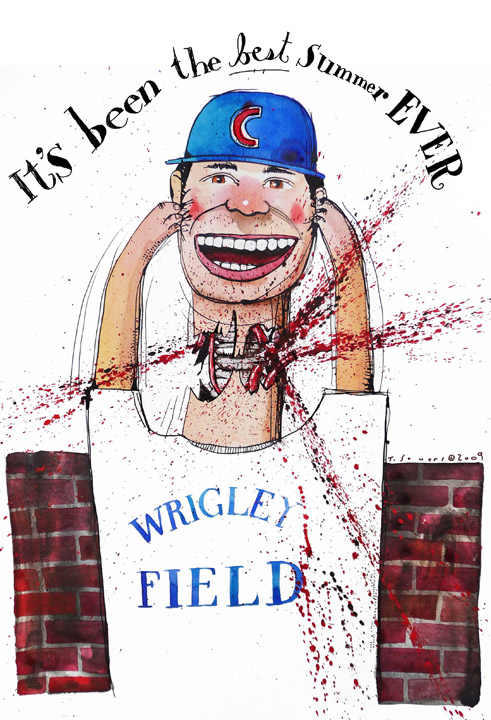 It's the GREATEST summer ever for Cub fans!
In a feel-good performance last night, the Cubs faced poor rookie Padre pitcher Cesar Carrillo, who started the night with a lifetime record of zero wins, one loss and an ERA of 30.86.
I was TOTALLY thinking it would be so nice if the Cubs would somehow find a way to lose so this talented young man could get on the winning track.
A tall order for sure, given that this year's Cub team just doesn't seem to have that many weaknesses.
But clearly the Cubs were at their best last night.
Right about midnight?
Young Cesar had his first win and brought his ERA all the way down to 11.8!
I'm so happy for him.
HOOORAAAYY!
He's from Chicago, you know - just a super heart-warming story.
I read that afterwards Ryan Dempster said, "I'm ticked off."
Surely you're aware that he's the Cubs Team Jester, and that comment was totally tongue in cheek.
"We're not hitting like we're supposed to hit." added Alfonso Soriano with a twinkle in his eye.
Of course he's been telling that same joke since May, but I get a chuckle almost every time he does.
Unfortunately I'd fallen asleep and missed Kyle Blanks inside the park 2-run homer.
But just reading about it - the idea of an inside the park home run against the Cubs - what a hoot!
Thank YOU, my Chicago Cubs.
It's that kinda kooky Summer where the laughs just keep coming!
I hope it never ends.
You know what would be awesome for tonight?
SWEEP, BABY!
HAHAHAHAHAHAHAHA!
Go Cubs!

Yes, I agree, that made my night, it was just a beautiful game to watch...it made my heart all warm inside...oh those silly silly Cubs!

This is no longer "just baseball". This is nuts.

So I guess I'm with you all. When you "pull off your head" you've separated your brain from your heart. I'm just about there...emotionally detached. Numb.

I feel like I did the day after I retired..aren't I supposed to be obssessively passionate about something? Anything?

The only upside of this feeling seeping into the Cubs fan base is that we may finally start to hit Sam Zell in his pocketbook.

I guess hatred is a kind of passion.

Well, the only thing to do now is try to find something funny until the Cards start their nosedive.
Won't happen?
Not this year, but it'll keep my attention I guess.
Silly Cubs indeed.
Bud, nice breakdown of heart and head separation.
I'm working on a thing where literally this whole season is based on that (thought started with Aramis).

Next up: an image of Hendry's head on a platter, Salome style?

Well, you made me laugh Tim. There's something liberating about that.

Hi DB...now that I think about it, it might work!

You'd have to dance for Sam Zell until he's so intoxicated with desire that he offers you "anything in my kingdom".

That's when you say "bring me the head of (fill in the blank...SO MANY CHOICES) on a platter"

I don't suppose you could ask Sam for his own head, do you?

For that, I might do unspeakable deeds all in the name of distraught Cubs
fans everywhere.

Give me one of whatever you're having. Plenty of time? Do we have a time machine? Is the TARDIS around?

Uh, for a guy who writes a blog, I never seem to be clear.
I mean, there is PLENTY of time for the illustration which would include one GM's head on a platter...

I remember at the beginning of the season looking at the Giants... Johnson, Lincecum... Thinking, "that'd be cool if they did something this season..." Now I wish they die!

Down with the Giants (and Bob Howry)! Down with Colorado (and Marquis)!

In other news, I visited Wrigley for the first time about a week and a half ago. Road to Wrigley game; saw Hoff-power. It was pretty cool, #21 made a diving catch in left then hit a big home run. I learned that the way to get your parents to take you to a game is to just buy the tickets and tell them you "won them in a contest" and it would be a waste to not use them.

Now that I know the train/bus route... I might get to go on my own soon.

Awesome, Justin.
It ought to get a little cheaper as this season goes on, but that doesn't mean it won't be perfect weather and maybe a "W".

OMG did he ever.

This team makes me so mad. If we played like last night with any consistency, we wouldn't be in this sorry mess. We're not going to win the NLCD. Not with the Cards lineup the way it is, and not with the way they're playing. I don't even think we're going to get the wild card. There are simply TOO MANY teams ahead of us. That's a lot of people to hope to lose on a given night.

Because yeah, why would you dismantle the best lineup? NO REASON FOR IT. I think we can all agree from this side of the season that it hasn't worked. It flat out hasn't worked.