I got to go yesterday for the last couple innings.

Took some photos.
After, we all found out about Kevin Hart going to Pittsburgh along with Jose Ascanio and some other guy while the Cubs get a good lefty bullpen guy in John Grabow and banished-to-the-minors lefty starter Tom Gorzellany.
Kinda sad to see Hart go, but not gonna get all upset about that.
I still hope they leave Sean Marshall in the pen, where he's absolutely rock solid... while at the same time Lou does have the option of maybe giving him a spot start if the going gets tough.
But enough of that.
How's about beating the snot out of Houston 12-3 yesterday, and a combined 35 to 15 over the 4 game series.
I missed the fireworks yesterday, but still pretty great taking in some of that ass-kicking air at Wrigley.
Now it's a big road trip starting with the Marlins, who are always trouble.
But I can't wait for the games, and lets see if the bats are really turning into, well, what we just saw.
Okay, photos: 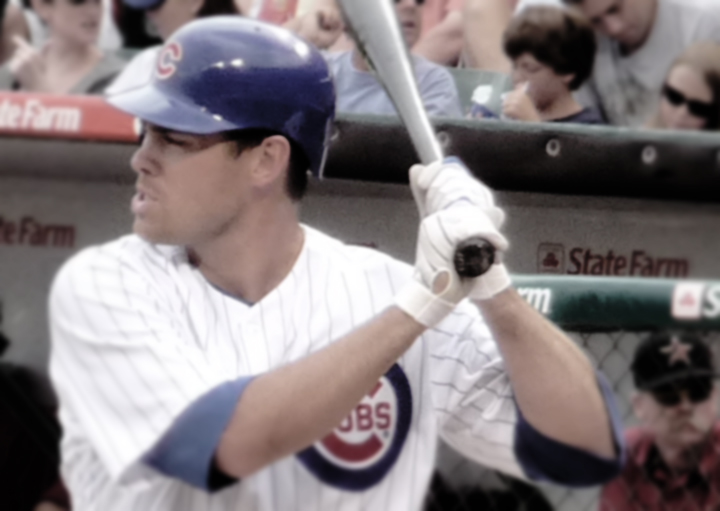 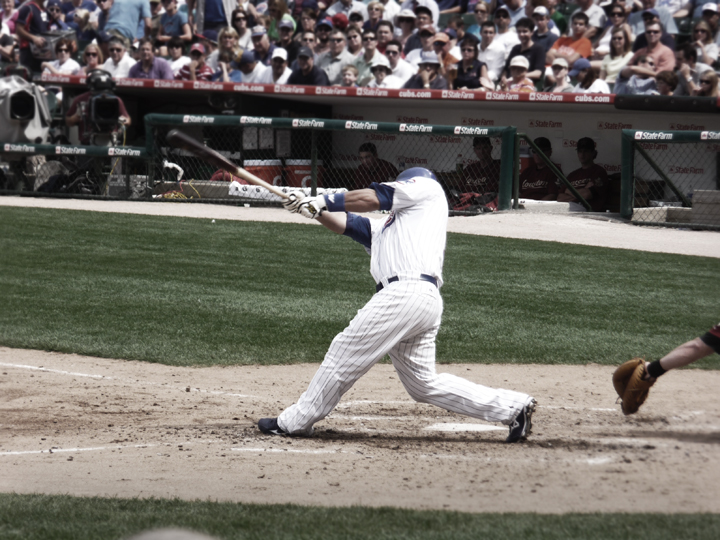 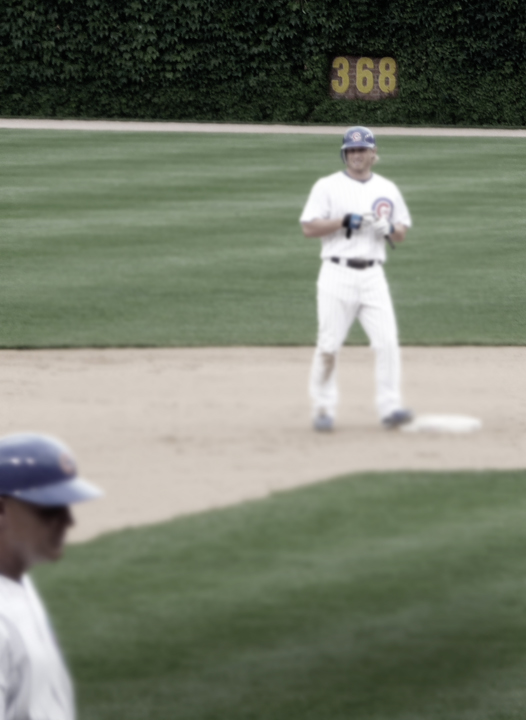 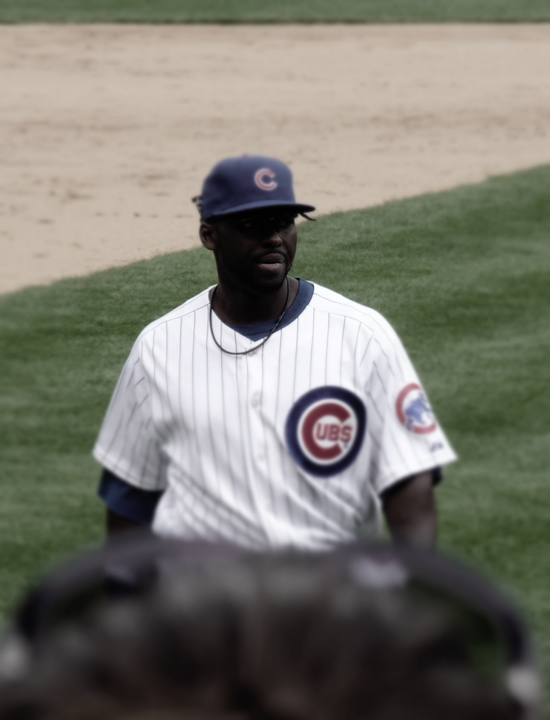 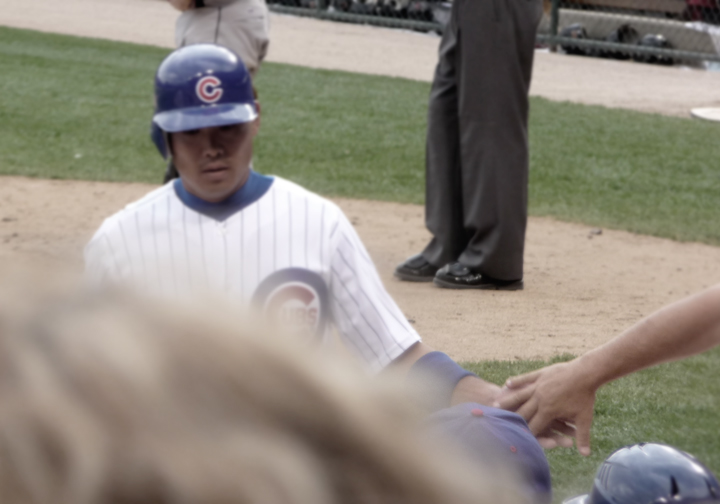 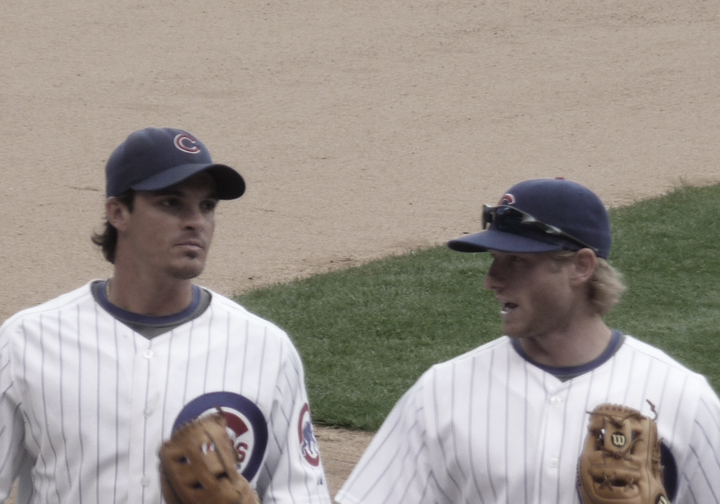 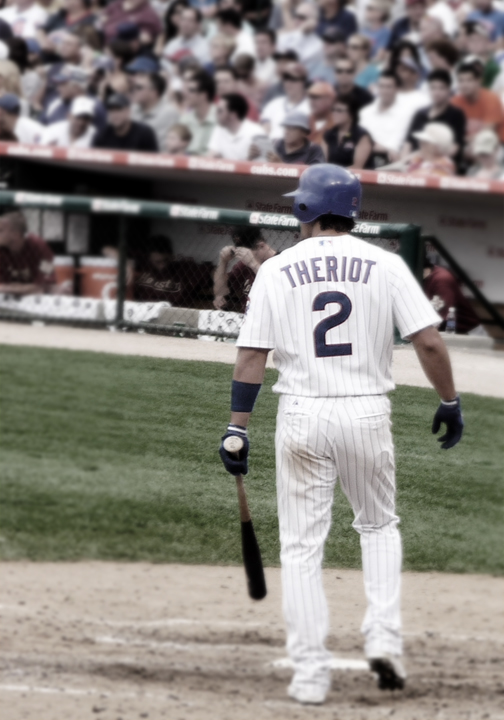 The pitching for the Cubs yesterday was kind of important.

They needed Randy Wells to go deep in the game to keep the spent bullpen in the bullpen, especially since the off day Thursday is now game 4 of the Astro series because of the earlier rain-out.
So how awesome is Randy Wells?
He goes 8 and gives up nothin'?
Some guy named Mitch Atkins finishes it off and the Cubs shut out the Astros 12 zip?
Wow.
I'm rather pleased.
Or something beyond that perhaps.
(I Hate The) Astros vet Mike Hampton could only go 4, and gave up 9 earned runs.
The Cubs scored 6 in the first.
This is the kind of game the Cubs played last year, when they were the best in the NL.
But there's always fine print, right?
Reed Johnson fouled a ball off his foot, busted a bone and is out for a month.
That's a chunk of serious talent, hustle and huevos gone at a crucial part of the season.
Today will be young Kevin Hart on the mound, who looked pretty Big League last time out.
Those Damned Cardinals outlasted the Dodgers in 15 long innings last night 3-2, and have a chance to sweep the best in the West today.
This morning the Cubs remain a half game behind, in 2nd.
Go Cubs. 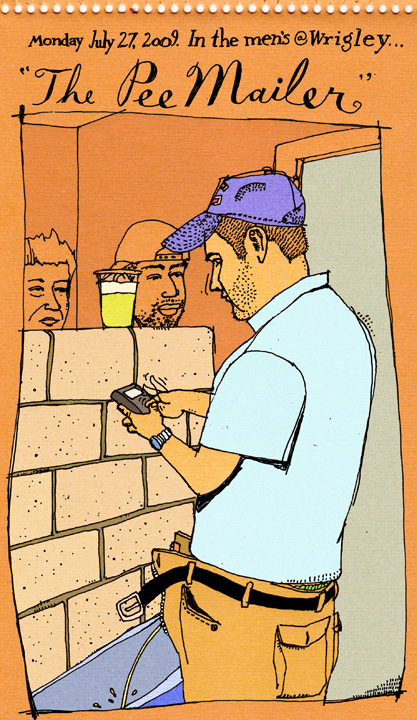 You know, just when you think you've seen it all at Wrigley Field.

Somewhere around the 7th or 8th on Monday night, I'm in the men's room.
I'm sure you've heard the descriptions or even been there, but the layout includes a sort of 5' tall wall in the center of the room, and along both sides are long, metal troughs.
So, you wouldn't call this a place with alot of privacy.
Etiquette demands you look up or maybe straight ahead at the guy across from you.
But out of the corner of my eye I thought the guy next to me was looking in a little mirror or something weird.
Couldn't help it.
I looked.
Guy was writing an email.
Just hangin' free, both hands emailing away and peeing at the same time.
He was so engrossed he didn't notice me staring.
On one hand, maybe it was admirable: not wasting baseball-viewing time with emailing.
On the other hand, he was probably on Twitter, writing "I am peeing in the men's room at Wrigley..."
But without either hand, it was just plain gross.
I scooched down away from him since I was wearing flip-flops and concerned about lack of concentration and aim.
The Cubs and Astros had an awesome multi-pitcher's duel Monday night starting with Big Z and Wandy Rodriguez.
Semi-dormant Cub Killer Carlos Lee creamed a ball out of the park early.
And our own Lee responded with one too.
Just before he did I leaned over to Sutter and said, "Lee's going long."
Why do I get so happy with myself when that happens?
Anyway, this was the game with the controversial squeeze play where Fontenot missed the bunt and Bradley was so out and the whole thing happened so fast you weren't sure what happened.
But now there were 2 outs and when Fontenot hit the fly ball that woulda scored the winning run, everybody was angry and vocal.
But it was an awesome game and when it went into extra-extra innings, the people still there were more of the hard-core variety, all totally engrossed.
So for me, when Alfonso Soriano hit the weak grounder to third and watched himself get thrown out from the comfort of the batter's box, it took all the wind out of my sails.
How could a guy not have his head in the game when everybody else at Wrigley was so into it.
(Later you'd find out he thought he fouled it off his foot, but still...)
I left in the bottom of the 12th with a big meeting early the next day, heard the grand salami by the immediately forgiven Alfonso on the radio driving home.
A great moment from Pat and Ron for sure as the Cubs beat the Astros 5-1 in 13 and stayed in first.
Last night went to a client dinner, snuck into the bar area a couple times and well, maybe Ryan Dempster will be better next time.
Cubs lose 6-11, and fall back into 2nd.
By the way, the Brewers have lost 2 in a row to the Nats, and are now 4.5 out.
Ouchee for them.
And at 1:20 today it's young Randy Wells vs. Mike Hampton.
Go Cubs.
One last thing.
Somebody offers their mobile device so you can send an email at the park?
Decline.

Cubs in 1st? How did that happen? 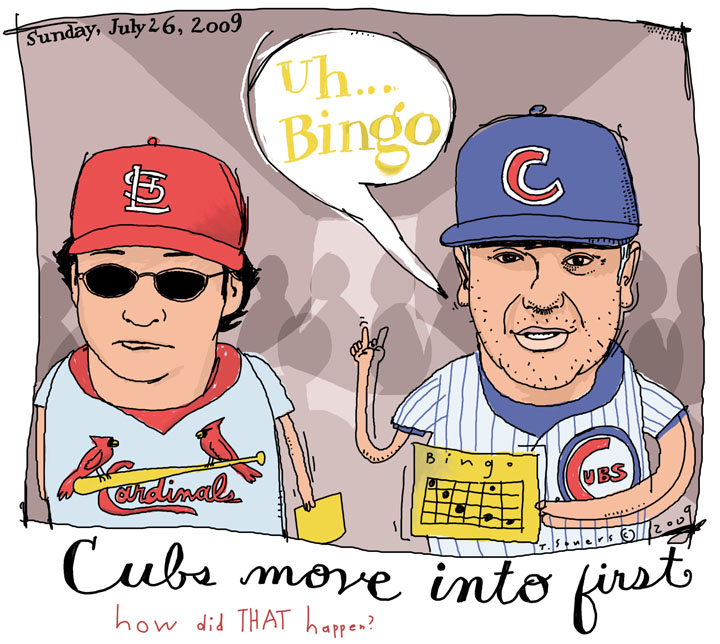 About the last thing I've been paying attention to is the standings.
I mean... there's so much weirdness going on...
Weren't the Cubs in 4th place about a minute ago?
Isn't everything all Cubby-Occuranced up?
All I've been hearing about is one injury after another for the Cubs, and the tightwad Cardinals went and loaded for bear with some big time trades...
And the Cubs moved into FIRST?
How?
It feels like Lou just won big at bingo.
God.
I bought some milk today.
You know how you check all the cartons out to see which one has the latest "sell by" date, and that "sell by" date is a couple weeks away?
It was "Sell by August 10th".
AUGUST TENTH?
In a couple weeks it's going to be August 10th?
What happened to the freaking Summer?
I haven't been to the beach once!
I haven't snuck out of the office for ANYTHING, let alone a Cub game.
I haven't put on sunblock... I HAVEN'T EVEN BEEN UNCOMFORTABLY HOT YET.
Ohh.
This is not good.
Okay, I'm making a promise right now.
I'm gonna slow down.
Introduce myself to my family.
Cub games will happen in the back yard with the radio on.
I will get out my bike, and actually make the pedals go around.
I will go to the park and paint a landscape.
Well, I hate landscapes, but... something tedious where I have to concentrate.
Lucky the Cubs scored those late inning runs, because that ump totally blew it on the Koyie Hill tag, and I'd feel vaguely guilty had the Cubs won by one...
Rich Harden can pitch when the sun is out (retired 16 Reds in a row!).
Alfonso might really be waking up.
Cubs sweep the Reds, winning 5-2 today along with 12 hits!
And they're in first place.
Mother of God, maybe there's a pennant race going on and I just didn't notice.
Go Cubs!
PS: Might be a good day to get in a poker game.
Buy a lotto ticket or something.
Enjoy this while it lasts.

Where would the Cubs be without D. Lee? 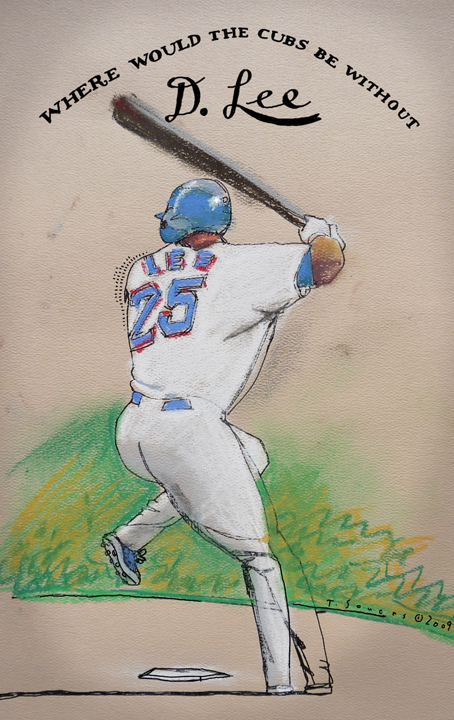 I've been meaning to do this kind of a post for awhile now.

Derrek Lee has been the rock of this team literally all year long.
He does it with quiet authority, dignity, clutch hits and a bad neck.
When I saw the tumble into third yesterday on his first inning triple, I thought he might come out.
Later, when he missed the foul ball and then stayed on the ground for a second longer than he should, I knew he would.
But that is one tough man.
Imagine having the discs in your neck...not right.
And playing baseball.
Luckily, he doesn't swing with the violence of Aramis Ramirez.
His swing is super smooth, and it starts from about the Cubby Bear and then out over the pitcher's head.
The liner to center he hit yesterday (caught, unfortunately) was my favorite connection of the day.
And kudos to the Reds centerfielder, because when Lee hits it on the sweet spot, the baseball becomes a blur.
I wish I could remember who I was listening to driving to Wrigley yesterday - it was an interview.
And the guy said basically that Derrek Lee is the perfect Cub.
This is a team and a city that gets super caught up in alot of crap.
God, remember the GIDPs last year?
He lets it all roll off his back, which is a skill you wish some of the other Cubs possessed.
Anyway, if there's one Cub who truly stepped up when the going got tough, and one Cub who'll do it again, it's him.
He came out of the game in the 9th yesterday, when the 5-1 lead should have been safe (no comment on our ex-Met reliever).
I didn't notice until after the second out.
Aramis, Alfonso, and Milton Bradley all hit homers.
Young Kevin Hart pitched really well.
Ted Lilly's gonna be gone for awhile, but there is no tear in the shoulder.
I read somewhere that yesterday Hart was sitting next to Terrible Ted when the Cubs were batting.
If you were gonna have something rub off on you, Kevin, that would be the stuff.

I was looking out my office window, thinking.

Hmmm.
A ham sandwich?
Or pizza.
God, this glass is filthy.
Maybe salad with some kind of meat...
BZZZZZ  BZZZZZZ       BZZZZZZ BZZZZZZ
My cell.
A message from my cousin Gurke.
"Lilly hurt shoulder. Maybe dl."
Nothing could have killed my appetite more.
A shoulder?
What happened to the knee?
I'm gonna hurl.
I guess he's going to do the MRI thing and they'll see what's what.
But you know what this is like, one Cub fan to the next?
You can't help but think the worst.
Then Olson told me about Holliday going to the Cards.
What an awesome day!
At least the Cubs beat the Reds 8-5.
At least Aramis is starting to be Aramis again - 4 for 5 with a homer.
At least Fontenot and Lee hit 'em out too.
But today instead of Terrible Ted, we'll see Kevin Hart.
God in Baseball Heaven, give me strength.