« How many Cubs does it take to screw in a lightbulb? | Main | This Cubs season is making me...less of a man. »

Sam Zell is eating my heart like an apple 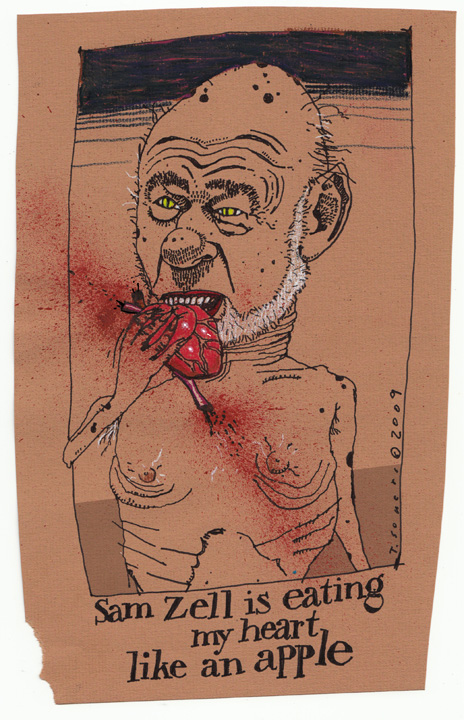 And he's been an active participant in making this season as bad as it can possibly be.
The DeRosa rumors that were flying around?
I actually thought he'd come back here if for no other reason than that the front office could bask in a good glow for a change.
But apparently, until the sale of the Cubs goes through Hendry's gonna be stuck with an empty wallet.
I'm not a betting guy, but my guess would be that Jim's never read "Moneyball".
Anyway, giant backloaded contracts and players with dipping production - that's far too depressing an area to get too deep into.
I really just wanted to do that drawing of Mr. Zell.
SELL THE CLUB YA FREAKING BOZO.
Let us have an owner who cares, and let us get on with our lives.
Wasn't last night nice?
A nice little win.
Rich Harden gave up a bunch of hits but he looked pretty damn good - I saw a 96 mph heater mixed in there.
Milton knocked a run in, Theriot knocked one out.
Marmol threw 7 strikes and 1 ball to get 3 outs in the 8th - that may be the most exciting thing that happened last night.
Sooo, that's better. I guess.
Yeah it's only Pittsburgh, but had the Cubs lost it would have been continued disaster.
I hear rumors of rain in Pittsburgh tonight.
Let that not be so, as I'd like to watch Terrible Ted become his old self tonight.
Go Cubs.

The image perfectly captures how SZGTH makes me feel. I may be naive, but I truly believe that when he's gone, if we get a hands-on, involved owner like Ricketts, we'll be OK.

Until then, I feel like we need an exorcism.

Goes well with fava beans and a nice Chianti??

Yeah, the whole DeRo thing. Ron was talking on the radio the other night about Hendry and being able to "pull the trigger". Ha. Whatever. Everyone knows we have no money for ANYTHING because of this sale getting FUBARed. We've paid for expensive crap for a long time and now it's come back to bite us. Supposedly Hendry had been talking with Cleveland about re-acquiring DeRo, but "couldn't"...

I am mildly mollified by last night's win and Rich Harden's badonk, but it *is* only Pittsburgh. The real do or die test comes later this week with Milwaukee...and then the damn Cardinals.

That's CRAZY, Bud.
You mean to tell me that YOU don't like old Sam?
INSANITY!

Yeah, it's like being in a gunfight and the other guy knows you're out of bullets.
Kind of a disadvantage.
And yes, the upcoming homestand will be super dramatic since it will feature all the bad guys.
Can't wait.
ps: I've never heard the word "badonk" before. Had to google.
I love google images...

Glad I opted to only peek in on the game and not watch the whole thing.

On the plus side, Fox did ok at 3rd. On the down side, that is the highlight of the game.

Had a non-philosophical discussion about the Cubs with fellow diehards this afternoon. The outcome was exactly what Carol Slezak, http://www.suntimes.com/sports/slezak/1644991,CST-SPT-carol30.article, is right. Lou needs to go because he has lost control.

Your illustration certainly fits my mood. Here we go again with just plain old bad baseball. Soto trying to go to third was the worst. What was he thinking?!

Maybe he thought the base was a bag of doritos?!? Sorry, a little blunt humor.

And back to sucking last night. Way to go offense, way to go.