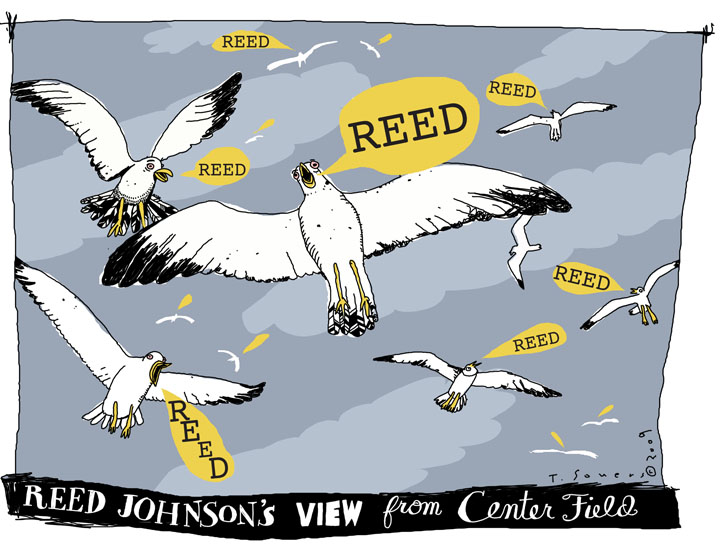 About a million seagulls swooped down onto Wrigley Field late in the game, and we could hear them.

Sounded like they were chanting "Reed! Reed! Reed!"
Which they should have, because he played such a great game.
The single in the first, stealing second, scoring on the first of Fontenot's blasts to right center, then laying down the perfect squeeze bunt with 2 gone and scoring Theriot from third, PLUS the dinger.
That, my friend, is called a good day at the plate.
Milton Bradley with three hits, Fontenot, Theriot, Lee, Soto - the bats looked goood.
And, Ryan Dempster.
Right now the Dodgers are the Cubs of last year - best record in baseball, all that.
Good for them, hopefully they enjoy a swift fall from grace come October.
Dempster absolutely had his way with them - just a super performance.
He gave up 3 hits.
Shut out.
Cubs 7 Dodgers Zeero.
Kim and I went, and I took a ton of photos.
Here's a couple. 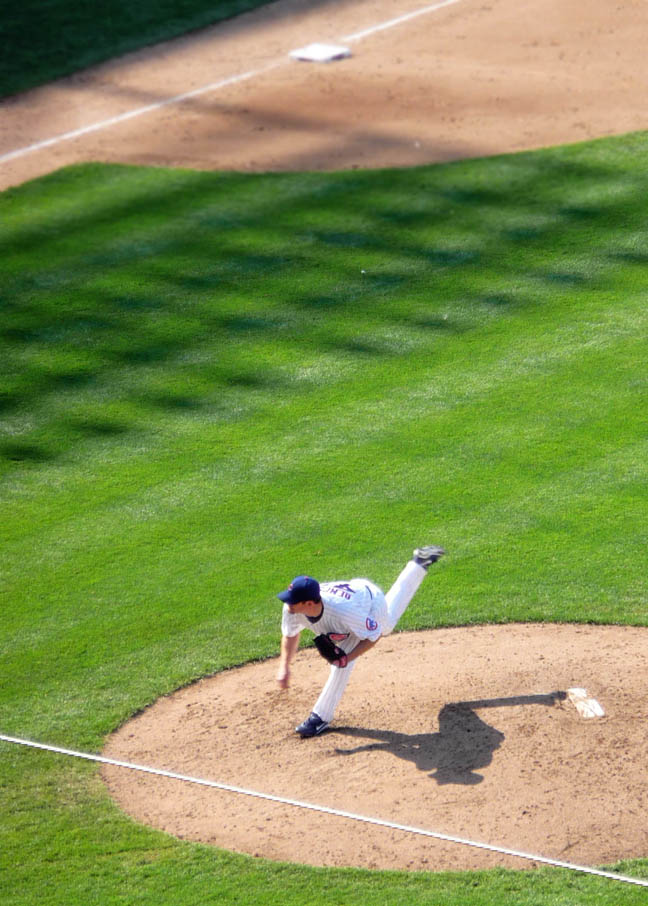 Dempster about the 5th. 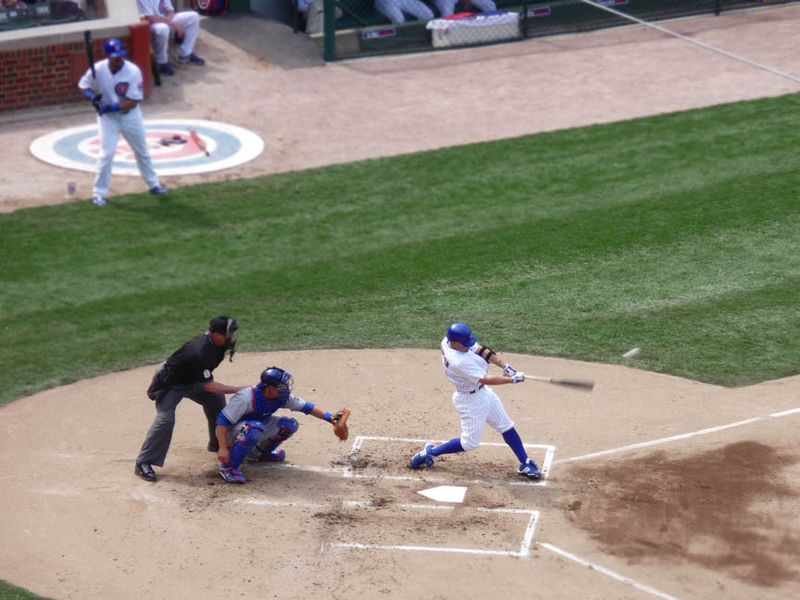 Reed's single. How lucky is it to catch the ball with a digital point and shoot? 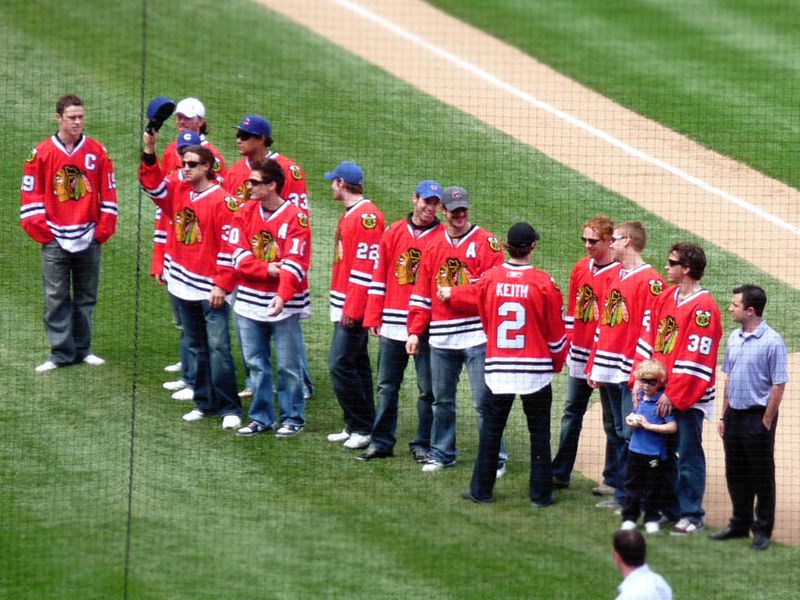 And the Blackhawks were there. Look at Jonathan Toews' (far left) feet. How duckfooted can you be?
Anyway, it was a perfect day all the way around, and ended even perfecter.
Through a strange set of circumstances, we ended up at the Wishbone over by Oprah's studios for dinner.
There's no place to park, so I valet my car.
Guy comes over, asks for the 8 bucks before parking my car.
Unusual, but I do and give him a buck tip.
We start to walk in, and he suddenly yells after me: "Scuse me!"
I turn around.
"Is this a stick?"
It's a VW, I don't believe in automatic transmissions.
"Yeah."
"Uh, I can't drive a stick, do you mind parking it?"
He has me pull it up to the curb, moving the car about 2 feet.
There's nothing to do here but laugh.
We go in, and fifteen minutes later he comes in and says, "I'm off now so, here's your keys. Car'll be fine right there."
You know, had the Cubs lost we may have had a different kind of conversation.
But hell, it was a perfect day.

How much of a BAMF IS Ted Lilly?

When I first read "The DaVinci Code", I couldn't help but start seeing these weirdy wordy things everywhere.
Anagrams?
Whatever, but a little animation on the last name of our meanest pitcher, you see the 6-6-6 Devil sign made famous in "The Omen" and it all becomes clear.
Ted Lilly just may be the Devil himself.
Someone to do battle with the Baseball Gods is actually ON THE CUBS!
People always ask how much of a BAMF Ted is, and maybe that's the answer.
How else do you explain shutting down the hottest team in the Bigs with just four hits over 7 innings?
The work of The Devil.
And Koyie Hill's homer?
The Devil made him do it.
Everybody thinks Milton Bradley or Carlos Zambrano are possessed?
Merely deranged, my friend.
I didn't even see Ted jump the fence the other day but I know he got the boot not because of anything he said, but because he scared the HELL out of the ump.
Kosuke Fukudome?
Did you notice the fly ball he hit was called a "sacrifice"?
Okay, I'm starting to get the fear.
But I'm glad Terrible Ted is on our side.
Because the Gods certainly aren't.
Chicago 2, City of Angels 1.
Today it'll be lefty Eric Stults vs. Ryan Dempster, who's due for a good outing.
Because he too has made a pact with...the Devil. 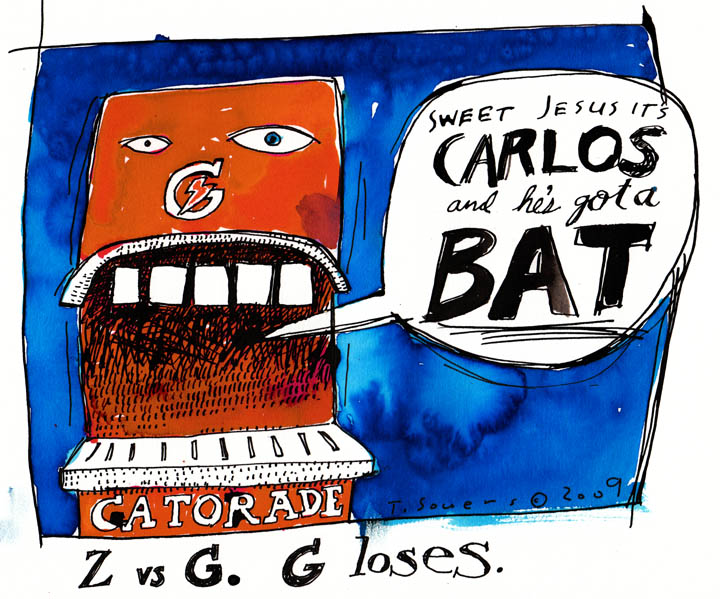 Man, that poor Gatorade fountain is getting the living hell beat out of it.

Couple days ago it was one angry Ryan Dempster smackin' G around.
Yesterday it was Z.
Close play at the plate on a wild pitch with the guy at third coming home, Z makes the tag.
You'd think that you'd get that call at home.
But...no.
Zandemonium ensues.
Pretty entertaining til Carlos bumped the ump.
I am positive Lou had a large scotch last night.
We'll hear about a suspension very soon.
Meanwhile, a game got played and the Cubs beat the Pirates.
HUMENDOUS clutch homer from Reed Johnson, then some clutch hitting from the triple A guys Jake Fox and Andres Blanco, and the Cubs went from a 2-2 tie to a 5-2 lead.
Marmol and Gregg did the rest, like they're supposed to do.
Victory.
Except for the Gatorade fountain.
Dodgers next, and 3 straight lefty starters from the West Coast.
Maybe Reed will get to spend a little more time running around the bases...
And lastly, a little applause for the Chicago Blackhawks.
They bowed out last night, but damn was that a fabulous season.
And Detroit can bite my crank.

Ding Dong The Witch Is Dead 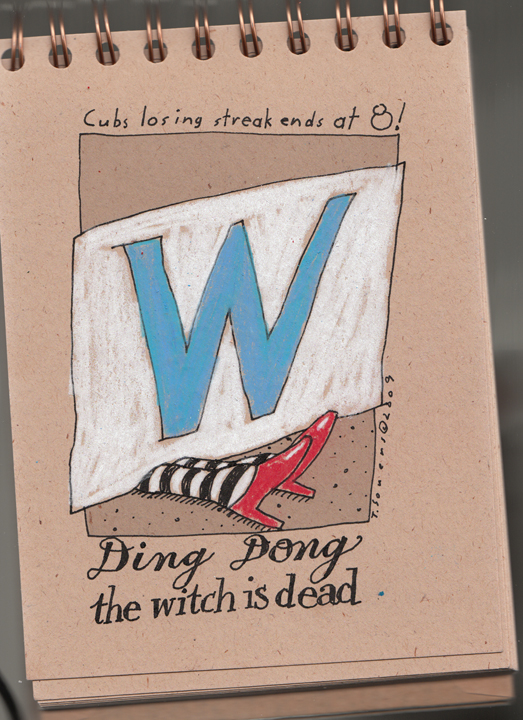 This losing streak - wasn't that kinda like Wizard of Oz?

Every day, you turn a corner and there's the witch with the "surrender" smoke signal, having the Cub bats walk thru the sleepy poppies, making everybody rusty, or sending off those freaking monkeys with wings and scaring the BeJesus out of everybody.
(That scene still gives me the worst kind of fear.)
Finally the W flag gets to drop on that hag.
Cubs 6 Pirates 1 in a game that goes only about 6 1/2 because of rain.
Sean Marshall was fantastic on the mound and as a hitter.
Fontenot, Hoffpauir, Fukudome, Alfonso, Bradley and Theriot all doing something wizard-like with the bats.
I'm still in my office cause man work is BUSY, but I got to hear some on Emily's radio.
Ding Dong The Witch Is Dead.
Now, lets keep her that way.
It doesn't get any easier as the week goes along...

Cubs lose. Buy me some peanuts and crack. 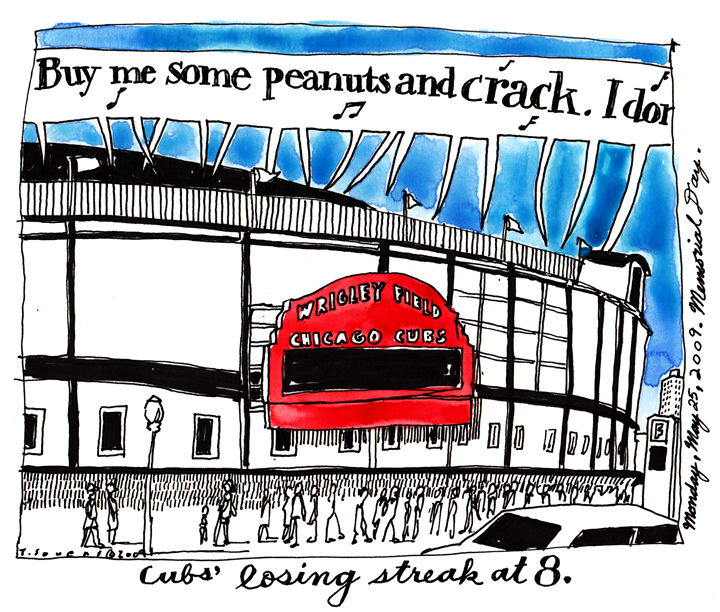 Sing it with me now!

The Cubs lost to the Pirates 8-10.
Their bats were at least in the game, but the pitching made Pirates like Freddy Sanchez into elite status superstars for a night.
Yep, this is the worst stretch of baseball we've seen on the North side in a real long time and I'm runnin' out of fun.
It can't go on, right?

Slumping Cubs: what would Hector Villanueva do? 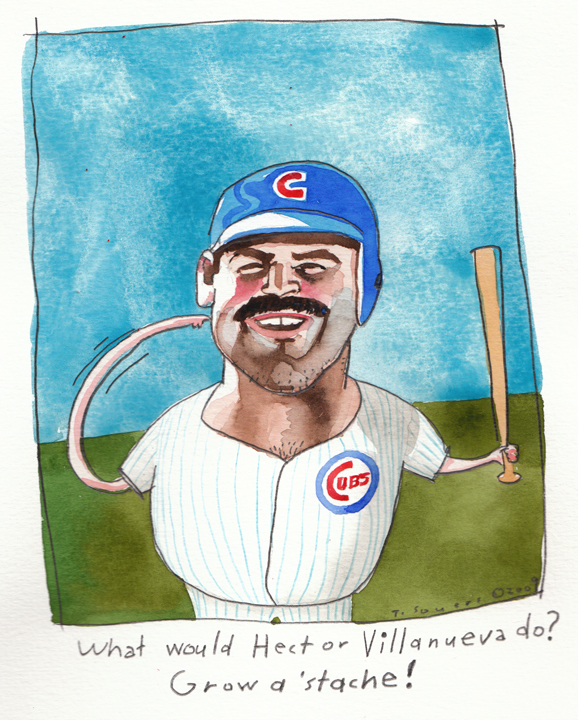 You all remember Hector Villanueva, right?
3 years with the Cubs?
22 homers, a stolen base, probably threw out a couple guys 'cause he played catcher?
He was an AWESOME Cub as I recall, and defined a certain body type you wouldn't ordinarily associate with a professional athlete.
Like lots of Cubs, Hector was no stranger to prolonged periods of time where his bat would miss the ball by oh, a foot or so.
So what Hector did, he grew a mustache to change his luck.
"I'm not shaving this thing until I get out of this slump." he said.
Consequently, he had a mustache for his entire career.
I would imagine that if I could ask Hector what the Cubs should do, he'd give the same advice.
Grow a 'stache.
Sounds like a good idea to me, Cubs.
You too, Lou.
Well, Speedy Reedy gave me some hope yesterday with the 2 run homer.
They said on the radio that he should be in the line-up alot in the near future, as the Cubs will face a bunch of left handers.
And...not giving up on the Hawks just yet.
Lets see what happens in Detroit.
Lastly, take a minute to think about the American Military today.
In fact, stop right now and do it, and for sure when they play the National Anthem at the beginning of tonight's game.
My dad spent 20 awesome years in the Air Force, and I could not be prouder of him.
You probably know somebody in the service too - if you see them today, shake their hand.
Happy Memorial Day.