What's the latest offer Manny turned down from Dodger Owner Frank McCourt?
Here's a story from the LA Times (via MLBTR of course).
Oh.
I see Scotty Boras has countered with an offer to have Manny play baseball for 45 million dollars for the next two years, only the contract has to have an opt out clause at the end of the first year in case Manny feels like he can get a better offer.
You know, Manny and Scotty continue to be simply revolting human beings, but now I'm starting to think Frank McCourt is uh, dim?
This has been going on for months - continual public bitchslapping directly to the face of Mr. McCourt.
It was kind of amusing at first, but enough already.
God.
I am so glad the Cubs don't have a clown like that around.
And I could not imagine having that guy as a team mate.
Greedy prick.
Okay, sorry for the language.
So, Micah Hoffpauir.
Making things interesting already.
I seriously can't imagine him really challenging D Lee for a starting job, but damn.
Ted Lilly is going to serve his country in the WBC, I wish him well and I wish him a sensible total amount of pitches.
And lastly, the Hawks game last night was insanely entertaining.
Me, Bill Cimino, Mark Carlson and Mark Olson all had a blast (thank you Tom Duff), and while the outcome wasn't so good, the Captain Jonathan Toews hat trick, then not hat trick, then hat trick was amazing.
Olson took this shot with an i-phone. 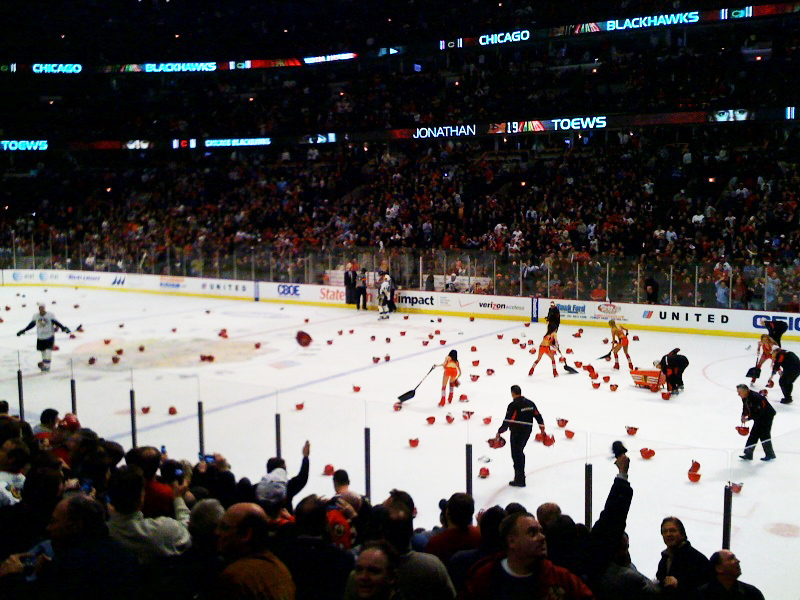 Gotta get one of those.

Meanwhile, Out On The Ice... 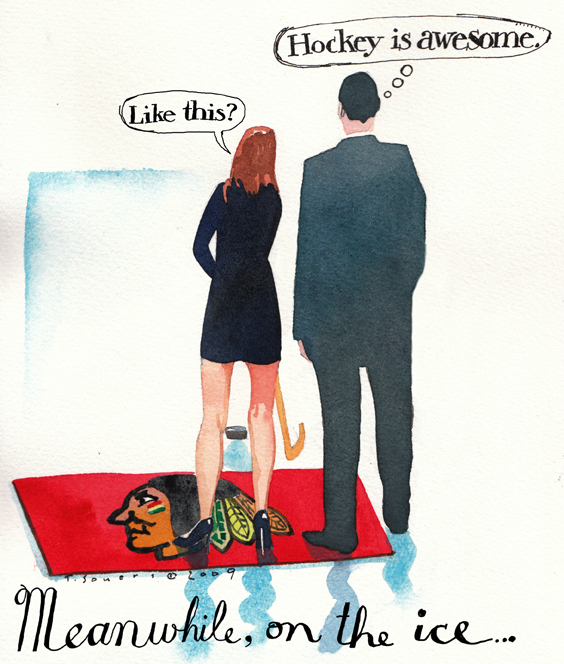 Diversion day for me.

Going to the Hawks/Penguins game tonight - I haven't been forever.
And with 23 games to go in the season, it's a good time to check in.
The Penguins, of course, have Sidney Crosby - the guy with 23 goals and 56 assists and a sore groin - and I really hope to see him tonight.
But what I've always wanted to know is: how do those guys in suits get the job of escorting the woman usually dressed in a mini out on the ice to stand on a piece of carpet and try to hit the puck through those little slots in that barrier they put up in front of the goal?
Who are those guys?
Are they "connected" somehow?
Some bigwig's son or something?
Or is there some game I don't know about with a different winner each game?
An "Ice Escort" tryout?
Probably not.
I would imagine you'd better be pretty steady on your wingtips to have that job, and obviously that takes serious training, dedication and skill.
Anyway, it's a part of the game I won't miss.
Okay, the Cubs.
I'm totally not paying attention to the Sun Times story about the alleged "rift" between Lou and DeRo - the writer did a great job of, I'm sure, ballooning the number of hits on Sun Time's website.
Both Lou and DeRo denied it pretty loudly, and it doesn't make any sense anyway.
I'm also refusing to even mention anything about anybody's quad.
So just, you know, pretend I didn't do that just now.
HEY!
LOOK OVER THERE!
How about Jake Fox with the 3-run dinger?
How about speedy new Joey Gathright going 3 for 3?
Told you I'm super busy here, so I didn't get to listen yesterday.
I read that Marshall went a couple and gave up 4 hits and a run, but somebody tell me how he really did please.
And now...work!
Go Hawks.
Go Cubs.

That Was Some Happy Cubs Radio Well, how fabulous was that?

I got to hear the beginning, just as I planned, so I got to hear Ron and Pat and feel suddenly normal again.
Pat cracked me up when he had a little trouble with the Cubs leadoff-hitter's name.
Remember that guy?
"Alfonseeo Soriano".
Hey, first day in 4 months - I'm a little rusty at listening too.
Speaking of which, Jeff Samardzija sounded a little rusty, but I got to hear the Reed Johnson catch, which made my day.
Then I went to a meeting, and then to another meeting, and then to anothe...
Ran into Olson in the hall and he says, "Did you hear?"
He did this 3 times to me.
"No, what?"
"DeRo hit a homer in his first at bat."
A little bit later.
"Hey, did you hear? A-Rod hit a homer and shut up all the boos."
(of course I read this morning he left in a car driven by his evil cousin)
"Hey did you hear? Tiger hit an eagle."
Found out way later about the grand salami from Hoffpauir.
Anyway, just a fabulous start.
Today is Sean Marshall in his first attempt at impressing Lou during the Spring of 2009.
Man, isn't life suddenly awesome?
My radio thinks so.

Finally I can wake up.
Today at 2:05 if you tune in to AM 720, WGN, you'll get to hear Ron Santo and Pat Hughes doing their first radio broadcast of the 2009 season.
I am SO gonna listen, but not for long.
I just want to hear their voices and maybe a little of the game.
My prediction?
A couple of comments from Pat about Ron's toupee, and a couple comments from Ron about Pat's awful sweater.
I get that, I'll be happy.
But really, while I am dying for baseball to start, this is sort of overkill.
It's so different now with the microscopic coverage.
There was a time when, you know, I was still a giant fan, but this pre-season stuff was something I'd discover accidentally.
Flipping through channels or finding the odd story in the paper, and it was like a gift from heaven.
One time I was by myself on a production weekend, and I was in sitting in the window of a 2nd story bar in Venice Beach, just having a beer.
I had no idea that the bartender was a giant Cub fan, and he switched on WGN and the gift from heaven unexpectedly falls in my lap.
Cub pre season game, probably a couple weeks before the season started.
There's Harry and Steve and Ryno and...
I'm watching, when all the sudden out the window a really tall guy rollerblading on the street gets hit by a car full of Asian tourists.
The guy is writhing on the pavement, clearly in a ton of pain, and 4 Asian guys get out and you could tell there was a breakdown in communication.
I couldn't help myself.
"SOME GUY JUST GOT HIT BY A CAR!" I yelled.
The bartender comes over and looks out.
He goes, "Oh, that's Patrick."
I go, "What?"
He goes, "That's how he makes money - watch."
And sure enough, it took a little time, but pretty soon the rollerblader guy is sitting up and one of the Asian guys is giving him cash.
They drive away, rollerblader guy skates off.
Took 15 minutes.
Bartender says, "He's wearing a helmet and every kind of elbow and knee pad - I don't think he ever gets hurt at all."
So I had another beer and watched the game.
Now, I don't really remember if his name was Patrick, but if you see me parking at, say, Foster Beach I'm always the guy going really slow.
You should all go to Chicago Cubs Online - they're so pro.
After all my angst the other day about who backs up Aramis and has some pop, I was so relieved to read about Bobby Scales.
Here's what they say: "Bobby Scales, like Andres Blanco, is in his second straight big league camp with the Cubs. Scales was impressive last spring and kept hitting at Iowa. In 121 games at the Triple-A level, Scales hit .320 with a .415 OBP and a .499 SLG (15 home runs and 20 doubles in 387 at bats)."
And they have a fabulous rundown of guys you have and haven't heard of at Spring Training.

The Lou-Mometer.
It would rhyme with "thermometer" if "therm" rhymed with "Lou".
(Of course, if somebody actually made one of these I'd be the first in line to buy it even if it only told me how hot it was outside.)
Man, I am ready for this.
I am ready for some fire back in my life in the form of Lou Piniella.
He's been pretty mellow lately, but I figure after watching him so calmly handle all the questions about collapse and pressure and disaster and one hundred years, I figure there's some heat to come.
It really was an awesome year last year, and it's incredible that we could be looking at a third straight division title this year (I am NOT looking ahead Lou, so calm down).
But I remember the "DO YOU THINK I'M STUPID?" reaction he had last year.
I kinda treasure that stuff - it makes life more interesting.
Anyway, once we get going, I'm gonna figure out how to keep this up on the right on the blog here, just to keep Lou's temperature in focus.
Probably, I can't make it jump like it does here, though.
Super busy.
Gotta run.
Games start tomorrow.
Maybe after that one more guy breaks the camel's back with, "So Lou, have you thought about maybe moving Soriano down in the batting order?"
Lets see what happens...

Carlos Marmol: To WBC, or not to WBC?

It's all baseball, right?
I mean, he'd be getting his practice in if he's in Arizona or Puerto Rico.
So, why not?
Well, back on Jan 24th, Peter Gammons weighed in on Carlos Marmol pitching in the World Baseball Classic.
So did the Sun Times.
Neither thinks it's a good idea.
Arms are touchy.
Plus, there's Lou over there joking that he'll be getting a good look at Kevin Gregg's 98 mph fastball while you're playing in another country.
Uh, I don't think Lou's really joking there, Carlos.
I read the Vine Line's blog today, and Mike Huang's got a little story in there about Derrek Lee standing in the batting cage when suddenly Carlos Marmol came out to throw.
Derrek said, "Aw, hell no."
That's the kind of joke I like to hear about now, Carlos.
It's your decision.
Use your head.