« Ladies and Gentlemen, Presenting The Rickettes! | Main | Most Obvious Cubs T-Shirt Ever: We've Got Ricketts » 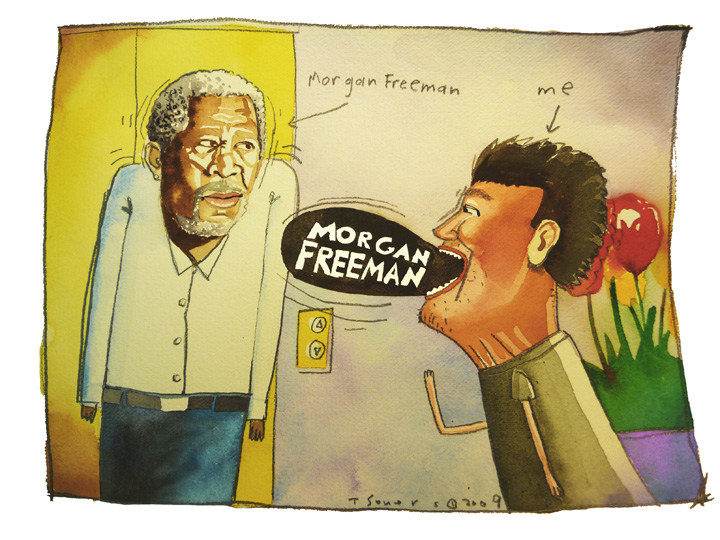 Well, this started with us talking about getting autographs at the Cubs Convention.
Reminded me of this little brush with fame story.
Nothing to do with the Cubs story-wise, but lesson-wise?
Yep.
This one time me, writer Oif, and producer Joel Goldsmith were staying at the 4 Seasons in Los Angeles while making a commercial.
When I was checking in this one particular morning, I was thinking about how "cool" the guests are with regards to celebrities who stay at this hotel, because celebs are pretty much left alone.
And just as I was thinking this, I heard a woman shriek, "GERARD DEPARDIEU!"
I turned around and seriously, every woman in the lobby mobbed the guy (you remember him, right? French actor guy?).
That kinda changed my mind.
I thought well, if you were REALLY a super fan of somebody, you might ohhh, I don't know...say hi? Get a handshake? Tell them how much you admire their work?
So, that turned out to be the seed planted in my brain that morning.
We go to a long day of shooting, come back to the hotel, and we were gonna go catch a late dinner.
Going in and out of the 4 Seasons is sort of an event all it's own - you call for your car, you walk past the smiling door guy, the 15 car guys are all wearing Armani or something, and there are way more important people than you (Hollywood people, heads of states, presidents of companies or small countries, and for instance that puffy blonde guy who used to be a rock star but is now in a reality show making out with puffy blonde girls) all waiting to get their car.
Some people enjoy that, but when you're waiting for your Hertz compact wearing the same shorts and t-shirt you wore at the shoot you'd rather just be able to walk to your car.
Back before 9/11, there used to be this other elevator that went straight to the garage (for security, I think only staff can use it now), and we liked it because it was so fast and easy.
Turned out, so did Morgan Freeman, because he was standing right there.
Morgan Freeman.
He'd just done "Shawshank Redemption", one of my fav movies ever.
"MORGAN FREEMAN!"
Shit.
I just yelled "Morgan Freeman!"
He's lookin' right at me, expecting me to, you know, complete the thought, which I hadn't really thought about.
I'm looking at him, Oif and Joel are looking at me, and so is Morgan Freeman.
Then, this comes out of my mouth.
"You're a GOD!"
It would have been so merciful if security had been there so they could have taken me to stalker jail, but they weren't.
The only thing there was time, space, and the echo of "You're a GOD!"
Morgan Freeman, however, is a nice man, and he sort of rescues me.
Smiling, he says, "Well son, I wouldn't exactly say that."
DING!
Everybody is so relieved, the elevator is here.
We all get in, Joel and Oif in back, and now I'm standing to Morgan Freeman's right.
This was actually the worst part of the whole deal, because while the elevator doors weren't mirrors, they were highly polished brass.
So I'm looking at a reflection of dork standing next to Morgan Freeman mere seconds after dork called him a God.
It's an enclosed space, there's nowhere to hide, and it's possible that this elevator used to be a freight elevator because it moves...reeaaaaalll....ssloooowwwww.
Morgan Freeman is looking straight ahead, with all the dignity of Hollywood Royalty.
I couldn't stop my stupid darting eyeballs, and after a bit he caught me staring at him.
One of the reasons Morgan Freeman is such an incredible actor is his remarkable, expressive face.
He can say more with an expression than most actors can with a paragraph.
You've seen him do that, right?
So he looked at me and said, "I'm so sorry you're such a colossal ass" without even moving his mouth!
The elevator opened up and he walked out.
Probably got about 10 steps away before Oif and Joel could stand it no more.
"HAHAHAHAHAHAHAHAHAHA! YOU IDIOT! What in the world were you thinking?"
Which was funny because I was kinda thinking what am I thinking the whole time, too.
But it was an honest thing - I really do think he's sort of a God among actors.
And while I think Ryne Sandberg is a God among baseball players, my Morgan Freeman experience has given me wisdom.
Unless I have something specific and smart to say to Ryno, he'll never hear squat from me.

Someday when we meet in person I will tell you the story about when I met Ryno. Eloquence and composure need not apply.

Shawshank is one of my favorite movies. If it is on tv I must watch it. I could be meeting Ryno for dinner and show up late because Shawshank is on.

Deal.
And I know what you mean about Shawshank - there are a handful of movies like that where you just go, "well, i'm watchin'.

I think the key is you have to plan ahead--not that you knew you were going to be running into Morgan Freeman. But before you're in the same vicinity as Ryno again, you need to think up that witty comment that will distinguish you from the rest of the crowd. And I don't mean something like, "You know you were really cute when you had hair..." Be prepared!

(An aside--I just got done watching my 5 year old niece for the weekend. I have one thing to say to you people with kids. Are you nuts?! Why would you do that to yourself?!)

Gee, I'm thinking...how would you tie these thoughts together? (I mean the deification thing and the kids thing)

And I thought of my wife (41 years next month).

We hads kids. I worked most of the time and she did all the daily dirty work. (She loved every minute.) And now she can't wait for grandchildren!

We've been searching for and annointing a lot of "Gods" lately. But sometimes you really don't have to look very far.

They're closer than you think.

I feel better about practically running away from Mark DeRosa now. And better about saying pretty much no more than "Haaaai, Thank you, Bye" to Rich Harden.

Donna, well rats, that "hair" thing was the exact line I've been carrying with me should I see Ryno - my dad met him once waiting for luggage at an airport.
Said he was a really nice guy.
Also, I'm pretty sure you had tongue in cheek with the kids comment - 5 is a really fun age.
Bud, stoppin' and smellin' the roses...
DB, trust me it was mortifying.

While we're sharing (non-Cubbie related) embarrassing celebrity encounters. Let me tell you that drinking 4 beers before talking myself into speaking to Alpana Singh (of WTTWs Check, Please! and Chicago Tonight "fame") was a terrible idea. I stumbled over, beer breath and all, "I LOVE YOUR SHOW" and then stared into her face for at least a full five seconds with a wide smile before blinking and walking away without response. *facepalm*

HAHAHAHA! That's a perfect one. Steeled with alcohol, and out comes the one thing Alpana probably hears more than any.
Woulda been nice if she would have at least said "thanks".
Hi Kelllymac. I think this is your first time commenting here, no? If so, welcome.
Love to hear your views on Cub stuff, too.

Hey Tim, sorry about the random comment. I had commented here a few times over the summer as "kmac", followed your blog through the fall and such and had to make the plunge and register an account to comment.

As for the Cubs, I, for one, am excited about the Bradley addition as I've had it with the "This Year" claims and feel like I'm just hanging on this year for entertainment. Let's see that mf flip his lid and climb up after the cat-callers in the bleachers!
that's a lie, i think the Cubs have a great team, i'm just out of energy, you know?

i am such a turd.

you are. you really are.

ps. I would have walked up to Alpana Singh and said I like the other host better (probably not). Except I do. I think Alpana is so flat on tv. Although I still watch the show.

God would that be hilarious, kelly.
There is something about right field, though - you're either a God or you're jacque jones.
Unless you're Fuku and nobody knows what the hell's going on.