I used to work on cereal.

They always have the exact same strategy: "It's GOOD and GOOD FOR YOU."
The only strategic difference in every cereal commercial you've ever seen is somewhere between those two thoughts.
This is way oversimplified, but it's kinda like, "We want our cereal to be 75% tastes good and 25% good for you."
I can talk for days about how awful that strategy is, but I'd rather not.
Instead, here's what I do in real life: I pour a bowl of something that's good for me.
Like Cheerios or Total or Raisin Bran - your basic everyday cereal.
Eat that.
Then, with the milk that's left over, I pour something that tastes good.
Something all sugary.
Like Fruit Loops.
That way, I get the whole good and good for me package.
And that's what I'm missing with the Cubs.
The last 2 years, baseball with the Cubs has seemed like only the Cheerios part.
And at the end there's milk left over but I don't get any Fruit Loops.
In 2009, I WANT SOME FRUIT LOOPS, DAMMIT!
I started the illustration below right before the '08 playoffs.
I was filled with hope and anticipation.
But of course the Cubs only scored 6 runs in their 3 straight losses to the Dodgers and were out of it immediately.
So, I changed the headline below it, and that will be my Request for the New Year. 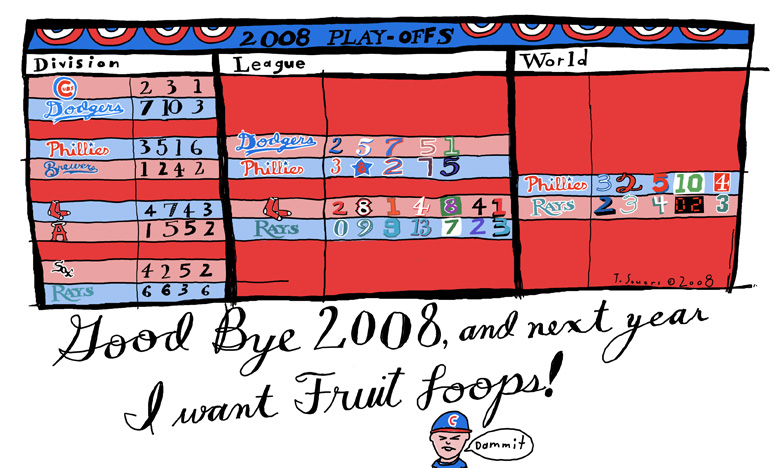 Here's to the Cubs getting over to the right side of this illustration! 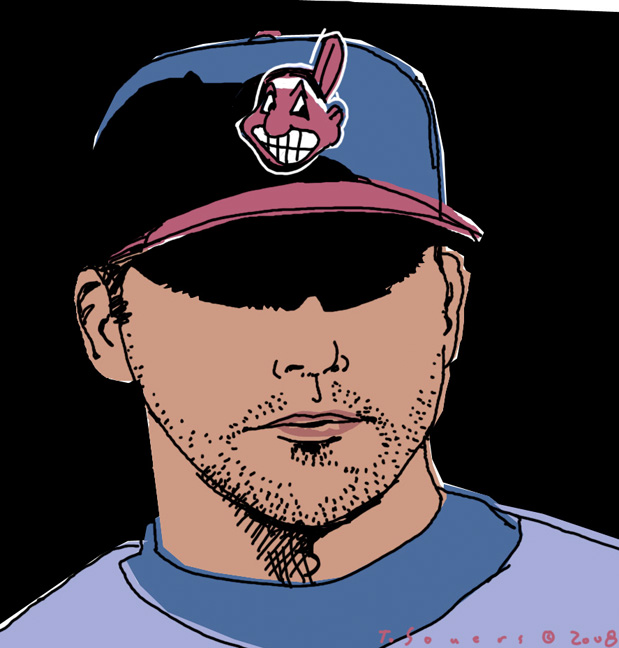 Looks like Jim Hendry's gonna try to get Jake Peavy after all.
The Cubs send Mark DeRosa to Cleveland for 3 young pitchers, which is what they're looking for in San Diego.
The Cubs also signed Cardinal switch-hitting infielder Aaron Miles.
Go to ESPN, or The Daily Herald for details.
I'm kind of in shock, although I probably shouldn't be.
You have to give up something to get something, right?
Well, damn.
This one hurts. 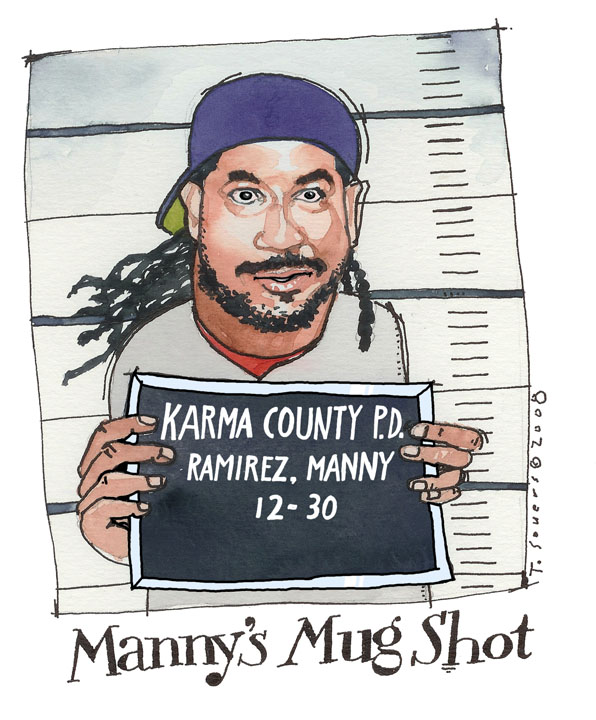 Manny Ramirez' selfish exit from Boston last season was weird, wrong, and painful to watch for any baseball fan.
But imagine being a Red Sox fan.
Having a guy you've been pulling for for years, maybe even idolized, suddenly saying he's not making enough scratch and then deciding to half-ass it on the field?
You'd want him arrested.
You'd hate the guy FOREVER.
And now, Manny Ramirez finds himself in a position where teams are reluctant to try and sign him because hell, he might just decide one day the contract isn't good enough and pull a Boston.
"Some general managers have said privately, a great concern they have about Ramirez is that if you give him a deal of two or more years that is worth far less than he thinks he deserves, you run the risk of having a very unhappy Manny. As the Red Sox can attest, that didn't work out so well in the end."
That's  MLB Trade Rumors quoting from a story by Buster Olney.
Please read it - Buster imagines what it would have been like in Boston had Manny not been Manny.
Really hammers the shame of it all.
And now Jason Stark says it looks like even his current team, the Dodgers, are done waiting for him.
So Manny, you got yourself arrested by the karma police, bud.
I'd laugh out loud, but really it's sad and sickening and all your fault.
Even I can't laugh at that.
Next, the Bears.
This is blasphemous, I know, but I'm glad they lost.
I'm glad the coaches have to explain a loss to the (then 7-8) Houston Texans, and another year of not getting to the playoffs.
I'm glad we're hearing that Bob Babich may be gone.
But really, I wish they'd have been as awful as we all thought they were gonna be at the beginning of the season, and we'd all be gratefully anticipating a new coaching regime, maybe even a new GM.
Now I'm just praying we don't have a "Groundhog Day" season next year too.
Lastly, your Chicago Blackhawks won their 9th in a row for the first time ever.
They started in 1926.
They play in Detroit Tuesday, and then of course it's the Wrigley Event game on Thursday against the same evil guys.
I'm so watching.

So If The Bears Beat The Texans And If The Vikes Lose...

Well, we can hope, right?

If the Bears win and the Vikings lose, the Bears would be the NFC North champs.

If the Bears win and the Vikings win, then it gets alot more complicated.

So, lets just watch and see what happens.

Resolution For D Lee: No More Grounding Into Double Plays 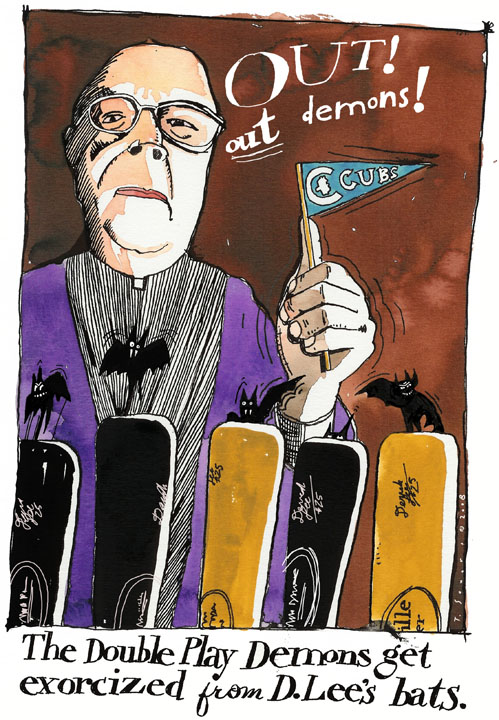 Easy for me to say, right?
Making a new year's resolution for someone else?
But maaan, Derrek Lee hit into 27 double plays last year, and that's a ton.
Still feels like I saw every one.
Remember the '06 broken wrist?
Remember how he tried to come back so soon?
That had to hurt like a mutha, but the Cubs were SO awful he felt he had to get back... I still admire the guy for that.
Wrists are goofy joints with a bunch of bones in them, a bunch of ligaments and stuff.
The swing of a baseball player is also a goofy thing, with a bunch of hitches and hand-to-eye stuff.
Anyway, kind of a stretch, but maybe his wrist was still a little weak last year.
And maybe next season he's smoking the ball over the shortstop's head (or just out of the park would be nice) rather than hitting those freaking grounders.
So I say, "OUT you DOUBLE PLAY DEMONS! OUT!"
And, because I've been hearing Derrek's name being mentioned along with the word "trade", I'm gonna put some Bruce Miles/Daily Herald stuff in here from Oct 29.
That's a long time ago in the world of hot stove happenings, but here:
"Speaking of no-trade clauses, the same thing applies to first baseman Derrek Lee, whom everybody wants to deal this winter. I got news for you - the Cubs aren't trading Lee, who took a lesser deal to stay with the Cubs a couple years ago in exchange for that no-trade clause. That's not to say there aren't some red flags about Lee and where his career is headed. Among first basemen in the NL Central, he ranked sixth in OPS (on-base percentage plus slugging percentage) behind St. Louis' Albert Pujols, Houston's Lance Berkman, Milwaukee's Prince Fielder, Cincinnati's Joey Votto and Pittsburgh's Adam LaRoche. That should be a major concern to Hendry, but the Cubs don't seem to be panicked over Lee's drop in slugging (even though his on-base was good this year). On top of it, Lou loves Lee's quiet leadership in the clubhouse. And although Micah Hoffpauir appears to be the flavor of the month among many observers, there's no evidence he can produce every day at the big-league level. The bottom line, like it or not, is that Lee will be the Cubs' first baseman come Opening Day 2009."
I love Hoffpauir (Bud, I know you do too but I think you're thinking outfield), but Bruce has got a point or two.
Lastly, Miguel Tejada of the (I Hate The) Astros was the NL league leader (in fact, the ALL TIME NL leader) with thirty two GIDPs last year. 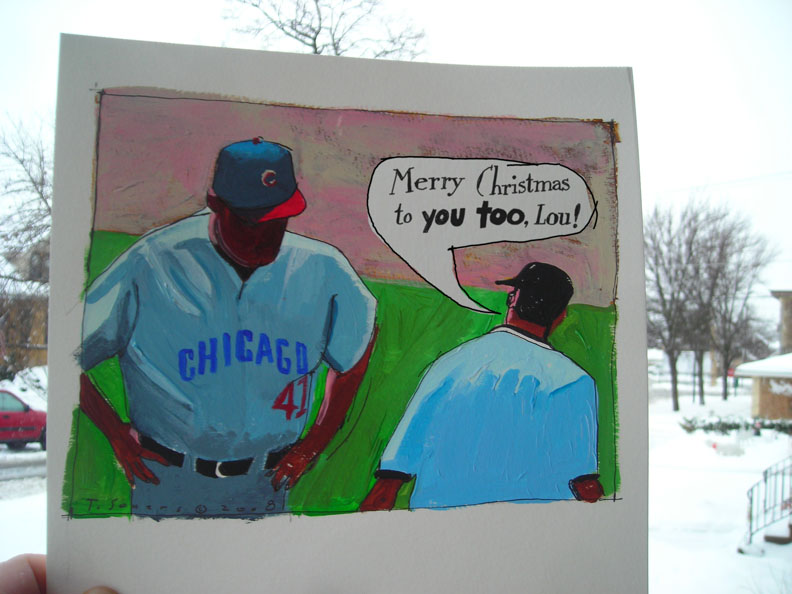 I figure at least once in some argument between Lou and an ump, the ump replied with something like this.
Did this painting early this morning, took the photo outside at about 9:45 on Christmas Eve - it's snowing giant flakes as I type.

Happy Holidays, Go Cubs, and thanks so much to you all for visiting, commenting, and being such a big part of this blog.
-Tim