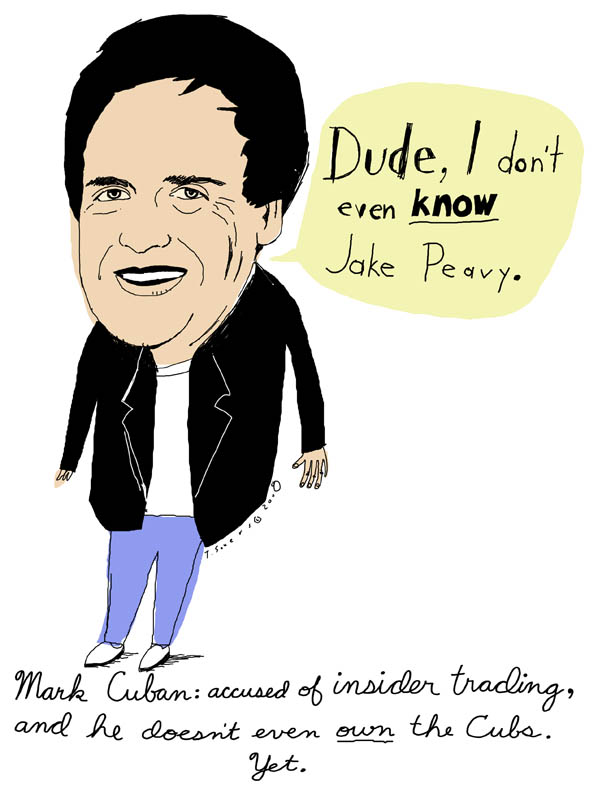 Here's some hot stove talk about Peavy and a hot seat for Mark Cuban, I guess.
If like me you would like to see Cuban own the Cubs, this is really pretty bad news.
Yesterday he was charged with insider trading by the Securities and Exchange Commission.

From the NEW YORK TIMES: "The charges could pose a problem for his dreams of a burgeoning sports empire. Mr. Cuban is widely reported to be the lead bidder for the Chicago Cubs baseball team, but he is thought to be too hot to handle by many of Major League Baseball’s current owners. The insider-trading lawsuit may only make his quest for the baseball team more difficult to fulfill."

And unless you’ve been trying to not pay attention, you’d already know there's also been tons of ink thrown around about Jake Peavy and the Cubs and a trade.

That’s really about Ryan Dempster not being signed yet - if he doesn't sign the Cubs go for Peavy and if he does then... well who knows?

I looked back to see all the Kerry Wood illustrations I've done over the years, and most were about injuries, but this one was pretty cool.

In 2003 the Cubs had a really crazy week that ended with a 3-game series vs. the Yanks at Wrigley.
That Tuesday during a game with the then Lou Piniella-managed Tampa Bay Devil Rays, Sammy Sosa swung at a pitch from Jeremi Gonzalez and his bat busted to reveal an illegal cork soft and chewy center. 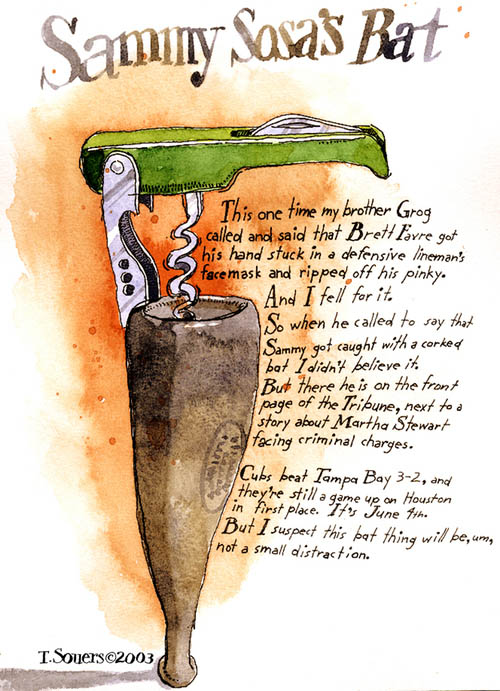 The Cubs went on to win 3-2, but Sammy got a big suspension, and it was truly the beginning of the end for him and Chicago.
The Yankee series was huge, the first time the Yanks had been to Wrigley since the 1938 World Series (quick trivia question: who won?).
Kerry Wood started game 2, the Saturday game against Roger Clemens who at the time had 299 wins.
This was also the game where Kerry Wood and Hee Seop Choi crashed into each other going for a pop-up - I think it was Wood's knee hitting Choi's head?
Anyway, Choi got a concussion which turned out to be the beginning of the end for him, too.
But Wood shut down the Yankees, striking out 11 and denying Mr. Clemens his 300th win.

Then on Sunday, Mark Prior beat 'em too, and the Cubs won the series 3 games to 2.
Here's Dusty Baker's quote at the end of the week (from the TRIB):
"I looked at the moon [Saturday] and it was like a half-moon," Baker said. "I'm a full-moon man. Things seem to go well with me when the moon is full. I'm trying to find a reason for the week and it was like, `Oh, that's why--we're on the dark side of the moon.' Maybe this new moon is going to be great. I'm trying to find anything I can."
Hilarious. 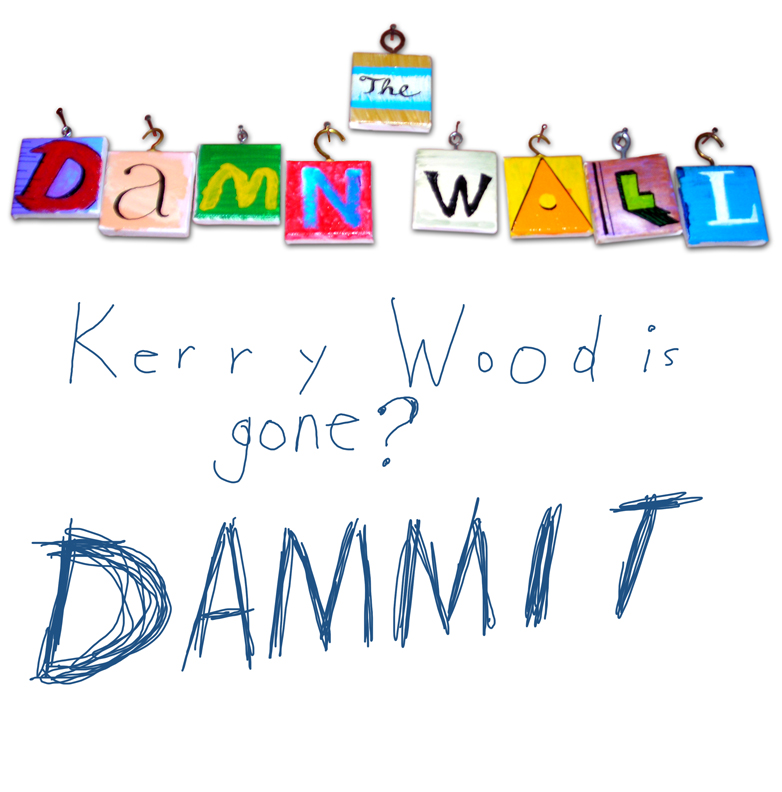 So, there goes the first big weird change.

The Cubs let Kerry Wood go.
They sign some guy from the Marlins who I'm sure I'll know more about soon.
But right now I don't really care about him.
Like Michael Jordan or Walter Payton, Kerry Wood was a guy I wanted to see get the Big Ring as part of Chicago.
Michael won a bunch.
Walter got the one, but didn't get a td in the Big Game.
Maybe like Greg Maddux, Kerry'll get one on some other team.
And I'll be rooting for him.
But right now I am sooooo bummed.
One of the real, honest-to-god Cubs.
Gone.
This totally goes up on the Damn Wall.
DAMMIT!

"Cardinology"?
Would that contain songs with titles like "Pujols' Elbow Hurts So Good" and "Tony Pulled A Pitcher"?
Ryan, buddy, what is up with that?
Why not "Brewerology" or "Metology"?
Or... "Cubology" has a nice ring to it.
And you could do a serious protest song like "Put Santo In The Hall".
Or maybe just some whimsy.
"Big Z's Chin Music" or "Voodoo Like Lou Do" or even "How's Heaven Harry?"
Ahh, just kiddin'.
Ryan Adams' "Cardinology" is the album I can't stop playing right now.
Even if it looks like snow and I put this cd on in the car, I gotta crank it and put the top down.
Every day, the guys in the parking garage go, "Ain't you cold?"
Nahhh, just happy.
Seriously, go buy this thing.
It'll warm you up.

Pretty Sure Soto To Be Named R.O.Y. On Monday. 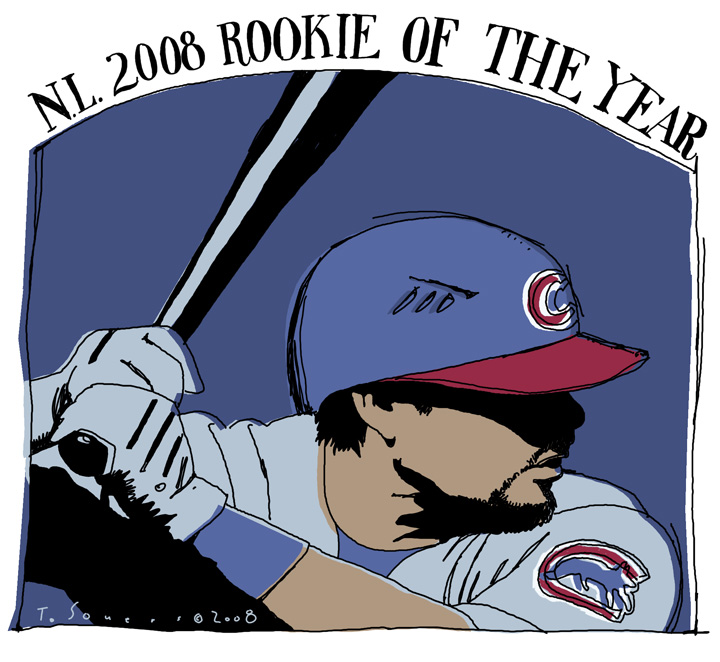 This one's not too hard to predict.
He started in last year's All-Star game, he hit .285 with 23 homers, and he handles wacky Big Z (which might be his biggest accomplishment of all).
On Monday we'll find out if Geovany Soto will be named the NL Rookie Of The Year.
Here's how the voting works, according to this article:
"...only two writers from each league city get a ballot. That means 32 voters for each of the four National League awards, and 28 for each of the four American League awards.
...voters include only three names, and points are awarded on a 5-3-1 basis -- five points for first place, three for second, one for third."
For the Cubs, it's been 10 years since Kerry Wood got the award, 19 years since Jerome Walton, then you go back to '62 for Kenny Hubbs and '61 for Billy Williams.
So this doesn't happen very often.
You know, at the beginning of last season, I had expectations for certain guys.
I figured Soto to be a total upgrade over Jason Kendall, and that woulda been great.
But he turned out to a total upgrade over every other NL catcher.
This honor should be a slam dunk for Geo.
Now, about the boyscout post.
I seem to have touched a raw nerve.
I guess it's still too early to talk about what might happen with our favorite team.
Lastly, Happy Birthday Dad!

Cub Fans, Take A Lesson From The Boy Scouts 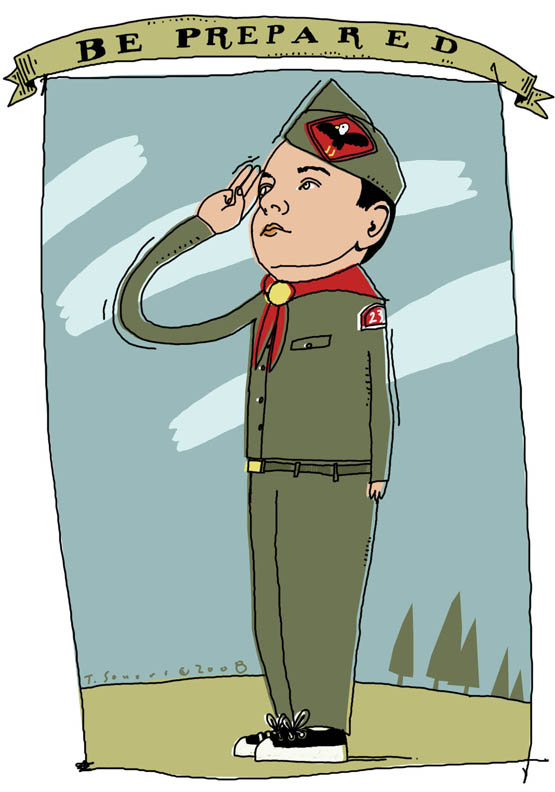 That's right guys - be prepared.
Cubs we've depended on, worshipped, cheered and booed for, invited into our living rooms and become friends with just might be...not Cubs any more.
You might open the paper tomorrow morning and see a photo of Derrek Lee smiling while trying on a Padre hat.
Ryan Dempster or Kerry Wood may become Angels or Red Sox.
Henry Blanco might decide to not take a cut in pay - other teams know this guy's value.
Brian Roberts' name is going to be in our conversations again.
Jake Peavy?
Who knows, man.
But we'll all have to be ready for change.
Yeah, you can say this team's in pretty good basic shape, but even if Jim Hendry doesn't have that much cash to throw around I figure some significant moves will be made.
And that lack of cash means that people become currency.
I was a Cub Scout in Hawaii.
I think I got to badger or maybe wolf?
Can't really remember.
I was Boy Scout for a little bit in Illinois, went to summer camp and got eleven ticks when I hid in a hollow log.
Saw the scout master give us a demo on how to use a hatchet, and show us that you should NEVER turn it around and use it for a hammer.
Of course some kid went ahead and did it anyway.
He mis-hit a tent stake, the hatchet turned and sunk into his shin.
When the scout master got out the medical kit and stopped the bleeding, he actually told us about how he was prepared for this kind of thing.
Can't remember that kid's name, but he was in some pain.
Ended up having to go home and get stitches.
Anyway, that kinda burned the "be prepared" thing into my brain.
Kerry Wood not being a Cub?
You never know.
But be prepared.