The First Time I Set Foot On Wrigley Field: "The Babe" 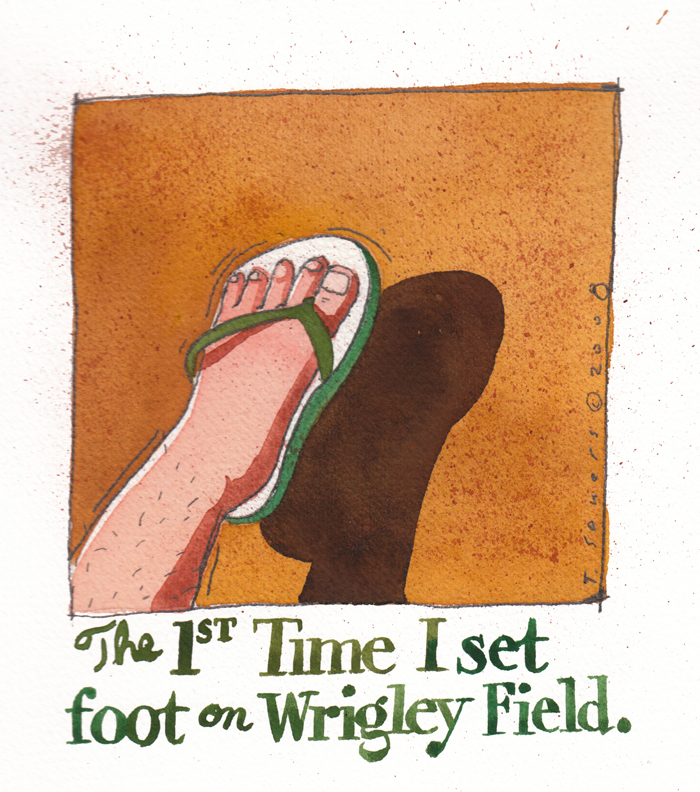 This is a true story, but I'm changing the name of "Scott Andrews" 'cause I lost touch with the guy and can't ask permission to use his name.

Also, some bad language in here, so be warned.

Remember that movie "The Babe" - the one starring John Goodman as Babe Ruth?
Early '90's?
There was this guy, Scott Andrews, who used to hang out at Jake's Pub and we were kinda bar-friends there, and also he was in the film biz.
He was a location scout mostly for commercial productions, but he got attached to this big-time "The Babe" movie, part of which was being filmed at Wrigley Field.
He invited me to stop by on my way to work.
Now, it's been long enough that I don't remember the exact details, but I remember it was summer, the Cubs were out of town, and I was riding my bike to work that day.
I locked it up in front, and you could see hundreds of people dressed in clothing from Babe Ruth's time.
3 piece suits with derby's, fluffy dresses and hats and parasols.
I went up to this woman at a table who seemed to be in charge and told her I was a guest of Scott's.
She told me he was out on the field and pointed to where I should walk down.
She didn't say it was a tunnel to the dugout.
The one real players use.
She had no idea how FREAKING FREAKED OUT I FREAKING WAS TO BE FREAKING WALKING DOWN A TUNNEL TO THE ACTUAL FREAKING WRIGLEY FREAKING FIELD.
I was kinda floating down, marveling at the walls and thinking about Cub history.
Suddenly a guy comes running towards me, clearly agitated.
He points back down the tunnel and yells.
"DID YOU JUST TAKE A SHIT DOWN THERE?"
Huh?
It was such a weird thing to say considering my almost religious state of mind.
"No. I..." and that's all I got out - he just ran by.
Then I started to smell something sort of awful, and right down at the bottom of the tunnel was this little room on the right. I don't think there was a door, but there was a toilet and someone had obviously done the deed I'd just been accused of.
Largely.
But looking past that was... why there's the dugout.
It was the visitor's dugout, but still.
And just beyond that was the actual diya-mond.
I walked out onto Wrigley Field.
Where Ryno and Shawn Dunston and Mark Grace and Rick Sutcliffe played.
(Well, it was also where Hector Villanueva, Steve Wilson, and Gary Scott played but... don't wanna wreck the mood.)
So the sun was just coming up over the right field wall, and I am telling you it was gorgeous and I was on. the. field.
Sure enough, there's Scott standing in short center waving me over, but looking kinda concerned.
"This is so COOL!" I said.
Still with the look of concern he says, "Hey, just a minute" and he holds up the walkie talkie so I can listen to a voice saying, "Somebody took a damn SHIT in the prop tiolet! Hamm, take care of it."
Now Scott is kinda laughing as he explains: "They're gonna shoot a scene where The Babe (John Goodman) is REAL hungover, and he's supposed to lurch out of the dugout and go puke in the toilet, but it's a fake toilet and somebody took a shit in it."
Now I hear a voice on the walkie that must be Hamm.
"Flynn, get to the prop toilet and clean up that shit." he says.
"Ahh shit!" says Flynn, "Morgan, can you handle this shit problem?"
A couple more seconds, it's Morgan: "Johnson, get somebody to clean up that shit."
Now it's Johnson's turn.
"Scott, somebody's gotta clean up that shit."
Without missing a beat, Scott goes, "Roger that. Montagano, you heard about the shit problem, clean it up please."
And on down the line it went, until finally somebody actually had to clean it up.
Amazing.
Shit rolls downhill even at Wrigley Field.
Scott took me around the outfield, but it was obvious he was pretty busy.
I walked back through the stinky tunnel, got on my bike and went to work.
Later, people kinda didn't believe I'd actually been walking around on the grounds of Wrigley Field.
They all said, "No SHIT?!" 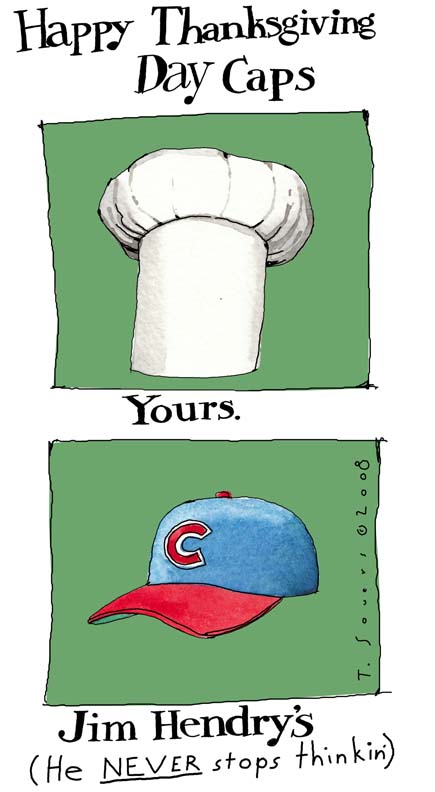 I just put the turkey on the grill so, I'm a little late.

But I'm taking photos of each turkey step and sometime soon I'll share how to smoke a turkey made so simple even a Cub fan can do it.
You can try it for the big December holiday dinner - it's even more fun if it's freezing out.
I have lots to be thankful for: family, job, you guys, and even though it ended like crap, this last summer was pretty awesome too.
I'm hoping, actually, that nobody even reads this today - be with your family and eat a bunch of turkey and watch football.
Even if you're dressed nicely, at the half go outside and throw some crossing routes to your brother or daughter in the street (be sure to yell "CAR!" if one's coming).
It's even more fun if there's a little snow so you can slide around in your Sunday Hush Puppies, but... not happening here.
I put the turkey on the grill while wearing a t-shirt.
Is that global warming?
Ahhh, I'll be thankful anyway.
Happy Thanksgiving. 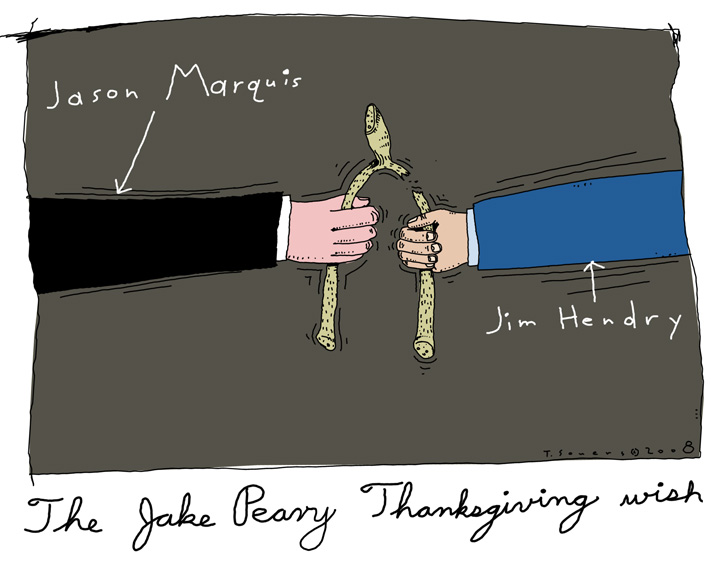 Well, I guess Lou spelled it out yesterday.
The Cubs are officially out of the Jake Peavy trade competition.
And believe me, Jason Marquis is SO relieved.
But maybe he shouldn't be...
Lou said all the right stuff to quash the rumor in Cubs.com yesterday, saying he's happy with the starters.
But then he did the classic, "HEY, LOOK OVER THERE!" distraction thing when out of nowhere he brought up outfielder Raul Ibanez: "Raul can hit, there's no question," Piniella told the newspaper. "He's a professional bat, and he's that type of hitter that we're alluding to. ... And he's a great guy, no question. I like the guy. He's a professional hitter; he plays hard; he's a good player."
Okay, so we're back to looking for a lefty bat, right?
Go read Barry Rozner in this morning's Daily Herald where he says, "In fact, the Cubs have become the leaders in the Peavy chase, mostly because Chicago is his first choice, and the Cubs might be the Padres' only option, according to sources close to the situation."
A rotation with Big Z, Harden, Dempster, Terrible Ted and Jake Peavy?
That kinda boggles the mind, plus it's way more fun talking about than Raul Whatshisname.
Really, what else you got to talk about?
Your aunt's stuffing?

How Long Til Spring Training?

You a little bored waiting for baseball?

Well, may this little .gif help you through another Cubless winter day. 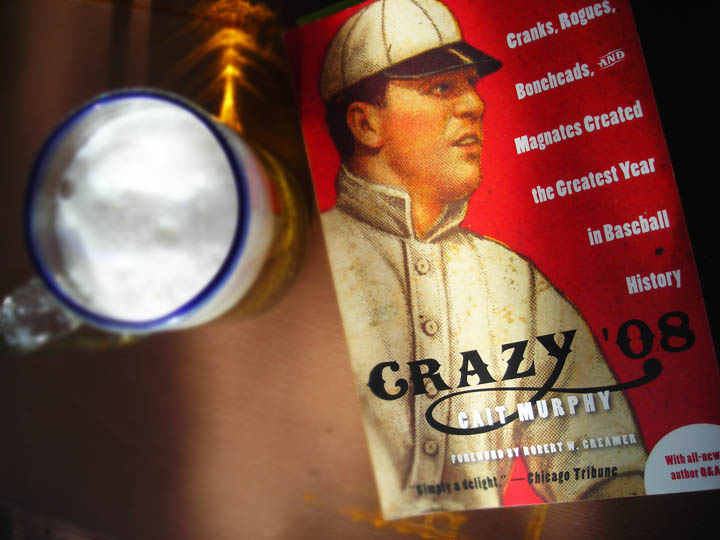 I’ve been waiting to get a little time to read Cait Murphy’s excellent book, “Crazy '08: How a cast of cranks, rogues, boneheads, and magnates created the greatest year in baseball history”.

It’s about the 1908 baseball season, and Cait has taken what must have been millions of hours of research and she sort of effortlessly ties all the small stories of the season all together into an easy reading, very funny and informative book.

Since it’s about 1908, I thought it would be all Cubs, but it’s really about everything – every team, the fringe characters, and just real stuff about the times.

How’s this hit you: “The causes of the panic might not sound obscure, but the consequences were not. A committee tasked in 1908 with analyzing the events described what happened: Two-thirds of the banks of the country [had] entered upon an internecine struggle to obtain cash, had ceased to extend credit to their customers, had suspended cash payments and were hoarding such money as they had. What was the result?. . . Thousands of men were thrown out of work, thousands of firms want into bankruptcy, the trade of the country came to a standstill, and all this happened simply because the credit system of the country had ceased to operate.”

That was a hundred years ago.

Plus, you get to meet the big players of the time – Honus Wagner, John McGraw, Tinkers Evers & Chance… do you know who Frank Merkle was?

He’s the centerpiece of perhaps the most controversial game ever played.

He made a base-running boo boo that became known as “Merkle’s Boner”.

Why do you love baseball?

But don’t google it.

Go get the book and spend some quality winter time with a frosty cold one, your favorite sport, and “Crazy '08”.

The drawing below is from when I started the book, on a plane. The guy in front of me suddenly went full recline and invaded all my personal space, forcing me to stare at his perfect part for almost the whole flight. 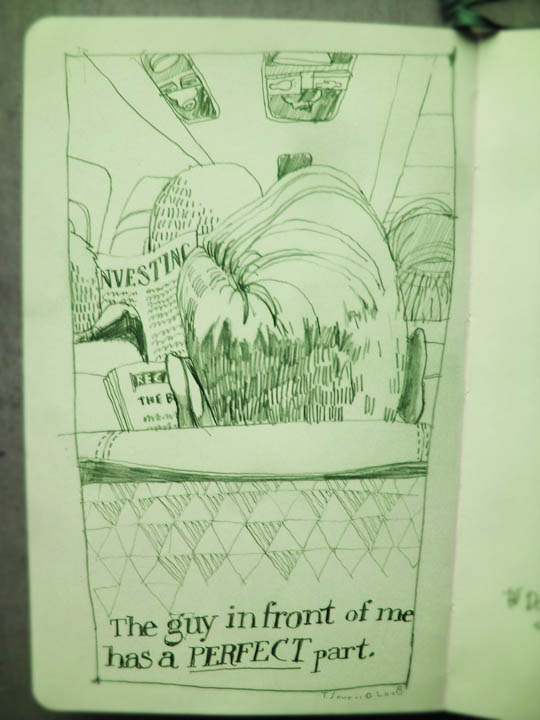 The Dempster Market Closes After 4 Days 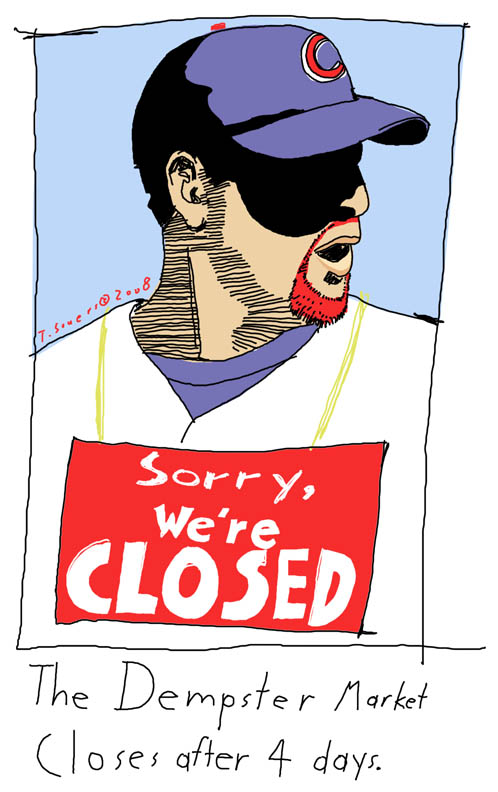 Well, finally some good news for the Cubs.

Ryan Dempster.
He was on the open market for 4 days.
Then, Jim Hendry gave him a 4 year deal and a 4 million dollar signing bonus, and Ryan decided to stay.
After the WS prediction at the beginning of last season and the dismal playoff performance, I thought maybe he just might have had enough of Chicago.
Yes, this last playoff was, well, as revolting as it gets for you and me.
But imagine being Ryan Dempser - having your worst performance of the year at home in game one like Ryan did.
Alot of people mighta just said well, I tried...adios.
So I have a tad more respect for Mr. Dempster for hanging around, not that he didn't get a pretty awesome contract to stay.
The longer I watch this team and this city, the more I think this must be waaay up there on the hard scale of places to play.
Given the pressure and all.
I also think if you played through the last couple years here, some of that hard part musta rubbed off on you.
So welcome back, Ryan.
I look forward to your turning it around next September.