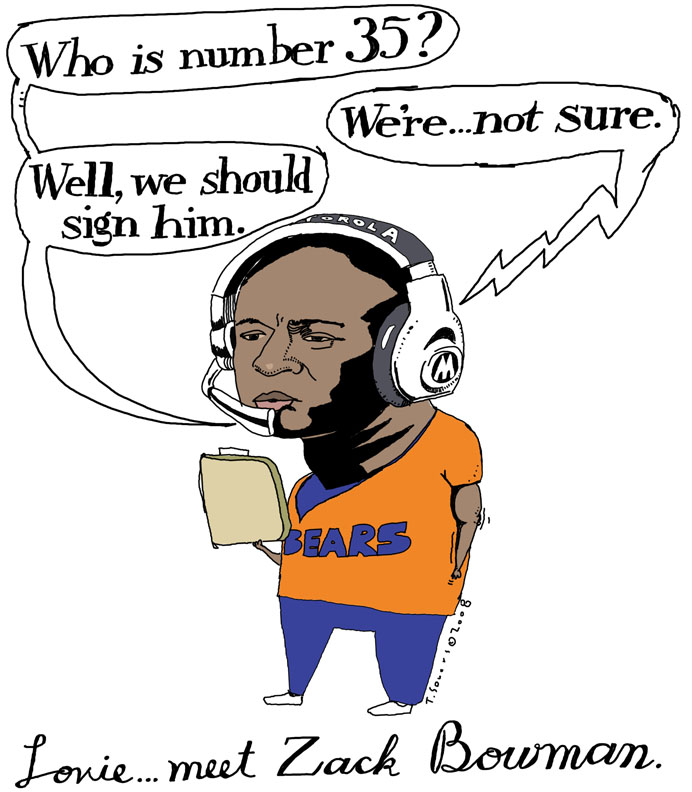 Well, as long as the Bears offense continues to score 4 or 5 touchdowns per game, and the opposing team gives the Bears 2 or 3 touchdowns per game, the Bears defense should be just fine.
Nathan Vasher and Charles Tillman and Daniel Manning are all injured.
Zack Bowman was making his NFL debut.
He scored a td by recovering a Viking punt screw-up, and he made the HUGE interception at the end that gave me my breath back.
Before that, you also saw him run to the sideline with his right arm dangling like a dead thing separate from his body.
But then other backup corner Corey Graham got a concussion, so Bowman talked the coaches into letting him come back out there with some kind of wrap that went from his wrist to up under his jersey.
Such is life for a kid from the practice squad who's suddenly the last cornerback on the team besides...I think they were talking about bringing in WR Rashied Davis.
Anyway, enough with the injuries already.
It's a bye week.
Heal, Bears, heal.
And, everybody shut up about former Packer Brett Favre calling up Packer opponents and revealing Packer secrets about the Packer offense until after the Packers plays the Bears and the Bears can learn Packer secrets from the former Packer too.
NOTE: After I posted this morning, I picked up the Sports and read that Bowman's going to have season-ending surgery for a biceps injury.
Nightmare. 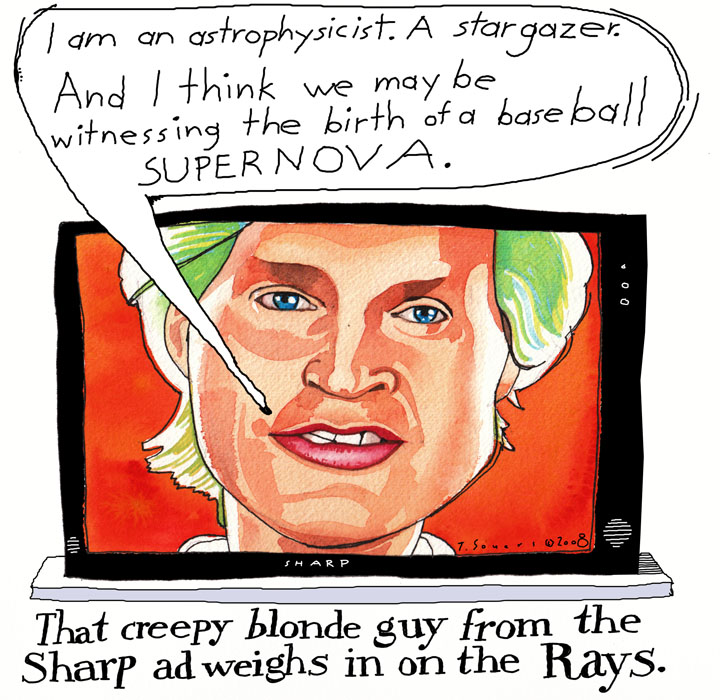 Who knows?
The Rays' bats and pitching were certainly a revelation during the ALCS.
That Matt Garza guy was hypnotic last night with just the one Boston run over 7 innings.
He gets the MVP for the series.
And the bats.
16 home runs - a record for the ALCS.
16 homers in 7 giant games.
That's amazing.
Now, you have to think with the history of baseball teams from Florida, these players won't be on the same team for very long.
So I want to remember some of these names: B.J. Upton, Evan Longoria, Carlos Pena, Akinori Iwamura, Carl Crawford, Jason Bartlett, Dioner Navarro, Willy Aybar, James Shields, Garza, Scott Kazmir...
Because some time in the future, we might look back at these names and be amazed.
Maybe it is a baseball supernova.
Who knows.
Okay, so it's the Rays vs. the Phillies in the 2008 World Series.
Not a giant draw, but I'll watch.
And now, the Bears.
All I can say is with the injuries to the defense, they better keep scoring 48.

Beckett Guts It Out 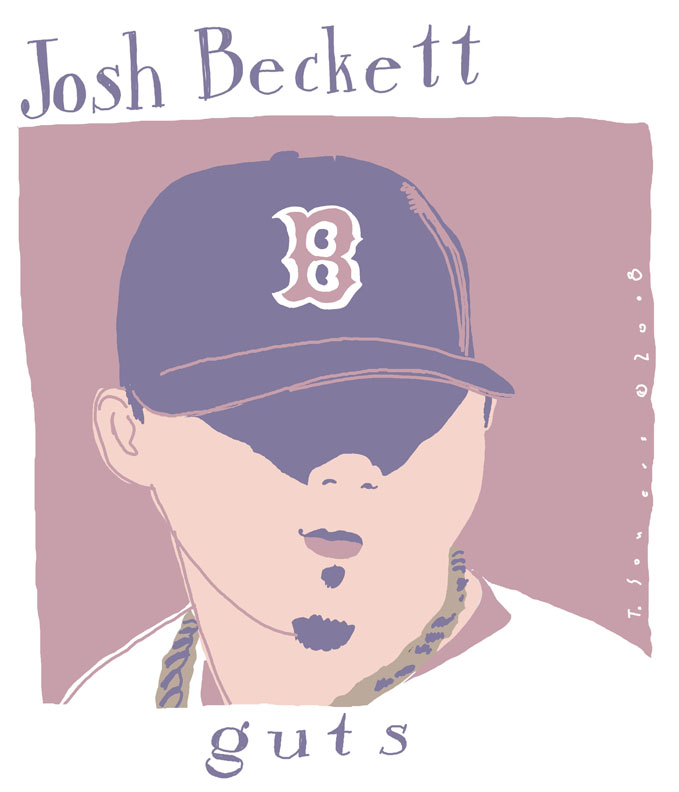 Couldn't tell if that was a smirk or a grimace on Josh Beckett's face.
Either way, that is one tough guy.
When I turned on the game, like you, I was watching a Steve Harvey show with apologies from Turner Broadcasting Company supered at the bottom.
Technical difficulties.
Same thing with Beckett.
He's got something wrong with his "oblique", which is the muscle (or muscles) on your side, next to your stomach.
So he can't throw full velocity.
But we all remember the guy when he was on the Marlins in '03.
Like he was born for post-season play.
He gave up a couple homers, sat through a 15 minute umpire-injury delay, but mostly just won on breaking balls and guts.
Awesome game to watch.
When they showed the replay of Upton's homer (the one we missed while Steve Harvey was on), they had to use this magnifying glass effect to show us the ball mostly because the background is white, but also because it was so high and moving so fast.
He creamed that thing.
Youkilis jacked one.
And Boston's Captain, Jason Varitek, hit one out too.
I think he was oh for forever in 2008 playoffs, so a giant boost for the Red Sox.
But I was hoping for some real baseball, and they delivered.
And in a couple hours, it'll be the Bears vs. the Vikes and then tonight Boston/Tampa game 7.
That's a pretty nice Sunday...

The Red Sox Brought Hope Back 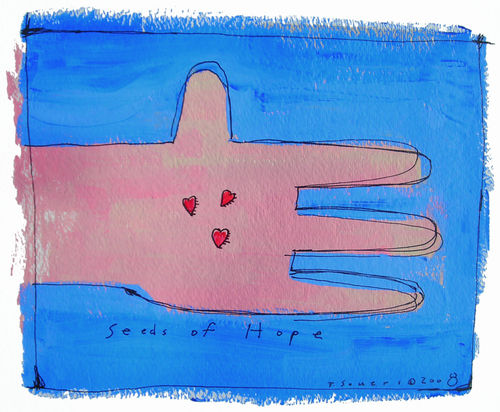 Okay, this is a little on the soft side (I promise exploding brains soon), but I was struck yesterday by how many people I ran into who were in such a better mood all because the Red Sox had the Amazing Comeback in game 5.
There was baseball chatter in the hallway - it's a good sound.
It seemed like since the Cubs got the bum's rush, every playoff series was the same: one team completely dismantling the other.
Rotten baseball.
No fun.
No magic.
No hope.
And then the Boston Red Sox had this amazing comeback vs. the Rays.
All day yesterday, I was happier.
Which was odd, right?
I mean - good for the Sox but why suddenly so upbeat, I asked myself.
Turned out the answer came in the next logical-yet-angry question: "WHY CAN'T THE CUBS EVER DO THAT?"
And you know what that logical-yet-angry question is, don't you?
The seeds of hope.
Maybe I really am starting to finally get over the bad ending.
Ah, probably not.
Again, sorry about this illustration.
Looks like a bad get-well card.
But...nothing a little college football won't fix, right?
And tonight, I'll be pulling for some good baseball.
Come ON Boston, keep it interesting. 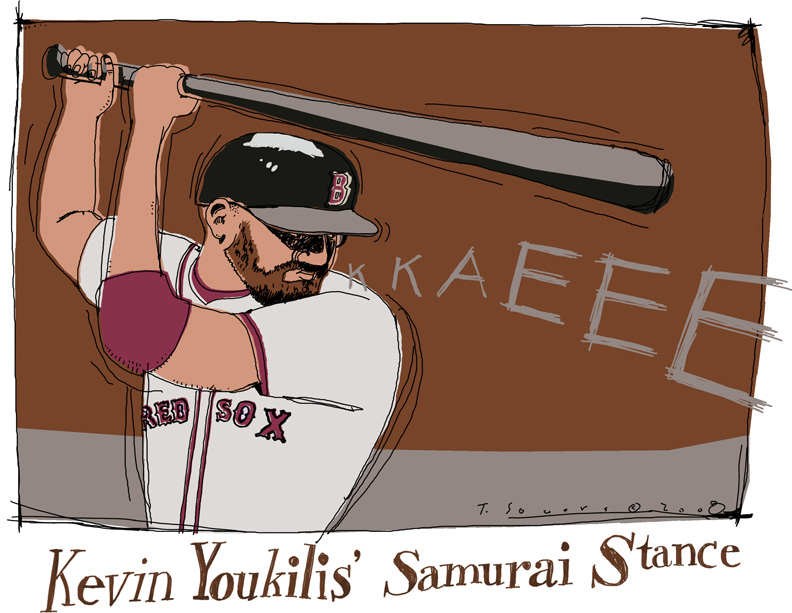 Kevin Youkilis. You gotta like a guy this intense.
So intense that I'm sure he never even thought about what he looks like before he gets set up at the plate.
Or maybe he does, because it's kinda scary.
Over his head, he points his bat right at the pitcher, hands apart, pretty much like a Samurai movie badass fighter guy with a big sword.
If Quentin Tarantino was a batting coach, lots of guys would do this.
Then he brings his hands together and swings.
Last night he... MOTHER OF GOD ARE YOU KIDDING ME? I JUST WENT TO THE BOX SCORE FROM LAST NIGHT'S GAME TO SEE HOW MANY HITS YOUKILIS GOT AND ONLY NOW FOUND OUT THAT...THE RED SOX WON?!
I got two text messages from die hard Sox Fan Kevin Goff last night - the first one came after the 2 Rays runs in the first and is unprintable.
The second one came in about the 5th and said, "I'm chugging rubbing alcohol."
I went to bed when it was 7 zip Rays, thinking the Sox had not only lost, but got creamed again.
Okay so Youkilis had a couple hits and he's batting .409 for the playoffs this year.
But I'm struck dumb by the victory.
The Red Sox can't do this again, right?
I gotta get some coffee... 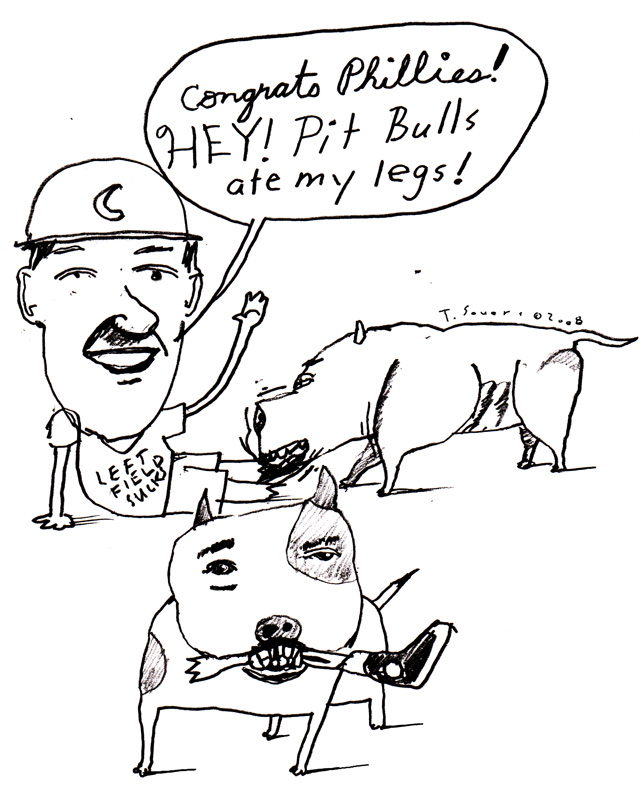 I'm just so happy for all the people in Philadelphia.
It's been what?
Fifteen looong years since the City of Brotherly Love had their team in the Big Dance.
Wooooo wee, like the elevators in my building - will it ever get here?
And here in Chicago why, the South Siders won it all just a couple years ago so, whatever's fair, right?
We all got to share in that city-wide pride...
You know, you might think that as a Cub Fan, I'd be a little bitter about the whole deal, but...not so!
We experienced a little extra pain this year, sure, but as baseball fans we all still love to watch your team play.
This NLCS was fabulous!
Filled with intrigue and excitement...Cole Hamels and Jimmy Rollins and...finally Ryan Howard looks like he's starting to wake up!
And... how about that Shane Victorino, huh?
HOORAY FOR YOU, SHANE-OH!
Lastly, I'm EXTRA happy for Brad Lidge, him being an ex Astro and all - it's just super special awesome to have a little Astro presence in the Fall Classic.
So, have a great time at the Series, guys, and good luck!