Scenes From A Cubs Horror Movie

You know the scene.
19 year old hottie alone in a creepy house at night wearing nothing but a man's oxford shirt, talking on the phone to her girlfriend when something scary shows up in the window behind her and we know that soon, verrry soon, she'll fall victim to...Sam Zell?
Yeah, that's the kind of Halloween I'm experiencing this year.
Anyway...
BOO!

There's Only One October, Which Is Good 'Cause The Weather Sucks

Finally, we can close the book on the 2008 baseball season.
It started with such promise.
But somewhere up front Lou Piniella coined the term "Cubby Occurance", and it seemed to stick throughout the whole season.
Even after the division series where the Cubs were given the bum's rush, Cubby Occurances seemed to blossom.
The World Series had weather that caused the last game to be delayed by 50 hours.
The umpires continually blew calls throughout (I'm sure resulting in more use of the instant replay in the near future).
And, come on - the Phillies?
World Champions?
If that's not a Cubby Occurance I don't know what is.
Anyway, good riddance to 2008.
There are about 108 days til pitchers and catchers report - that always happens about Valentine's Day.
So just keep thinking: Roses are red, violets are blue, pitchers and catchers report, WOO HOOOO!
Or something.

A Message From Kyle Orton 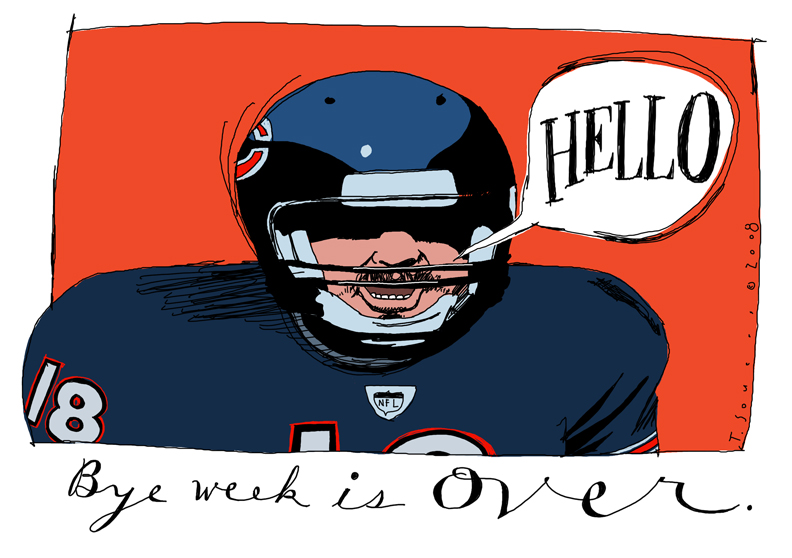 A Sunday without the Bears is... well, a fabulous excuse to rake some leaves.
And I was gonna do that, but I could not find the dang rake.
Dang!
I found it sort of close to dinner, though, so it's ready to go.
Looking at the schedule for the next available raking opportunity on a Sunday without the Bears is... wow - not til December 14th.
Probably the leaves will have blown away by then, no?
Anyway, really looking forward to having the Detroit Lions come to town next Sunday.
You may recall that the Bears lost to Detroit twice last year, 7-16 and 27-37.
Yeah, the Lions scored 53 (fifty three!) points on the Bears.
And that's just not right.
This year the Lions are the lowliest of the low at zero wins and seven losses.
In the NFL, nobody feels bad for you when you're terrible.
You just suck.
So I would appreciate some kind of mismatched score that would eradicate the memory of 2007.
54 points sounds about right.
And Kyle Orton is just the guy to get gaudy with the numbers like that.
Because we'd like him to be The Guy, get a respectable contract, make better receivers want to come play in Chicago, stuff like that.
I watched the Series until about the middle of the game.
Man, the Phillie bats woke up at just the right time, and they CREAMED the Rays.
Probably, it's over tonight with Cole Hamels on the mound in Philadelphia.
Be sure to watch because baseball is over after this.
Lastly, if you haven't seen new 49er head coach Mike Singletary's passionate post game speech, go here.
Man, that's just a good thing to motivate anybody to do anything.
In fact, when I get home I may play it for my son after I show him where that rake is. 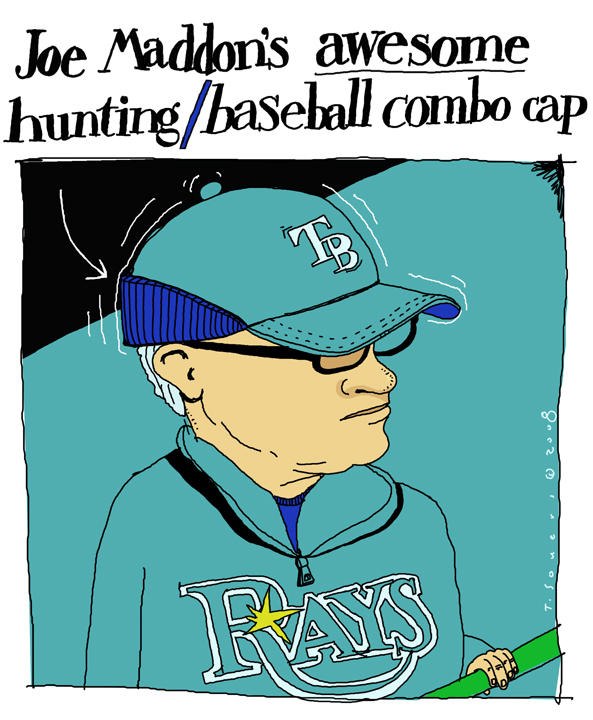 When you're the manager of a baseball team still playing ball in late October, you get to choose any kind of hat you want.
As soon as the game came on, I couldn't take my eyes off Joe Maddon's cool hat.
I also thought under some different circumstances, perhaps Lou Piniella could be wearing a hat with this exact design, only with a Cubs logo on it.
And after the Series was over, Lou could call Matt Sinatro and say, "Hey Matt, lets go out and hunt some squirrels."
(It goes without saying, of course, that Lou would do the driving since Matt's not so good with directions.)
Or if Lou doesn't hunt, then he could go chop some wood or something lumberjack-like.
Put on the red and black checked jacket and grab an axe and... ahh I'm so dreaming.
I turned on the Series last night, and since there was a rain delay I got to be absolutely astounded at the unbelievable awfulness of a television show that's, I guess, a real show starring that big guy who used to be on "Everybody Loves Raymond".
I switched over and caught some of the Blackhawks game, and they looked really good.
But this morning I saw they lost.
Can't stand Detroit.
Anyway, the game finally came on and Jamie Moyer was foolin' the big Tampa bats.
The ump called out B.J. Upton looking, and boy was he mad.
Later, we got to see what an athlete Upton is in center, when he went back and effortlessly that one fly that most guys woulda had to play off the wall.
Then, I woke up hours later and the tv was still on.
I found out everything in the Sports this morning.
Phillies are up 2 games to 1, which I never thought could be possible - the Phils look good.
Penn State beat Ohio State 13-6.
They're the best in the Midwest, which used to be a big deal.
This year, Michigan State is 7-2, Minnesota is 7-1, and Ball State is undefeated.
Okay, enough.
It'll be nice when this 2008 World Series is over, and we can put this season away.
Start thinking fresh about '09, and maybe Lou getting a cool combo cap. 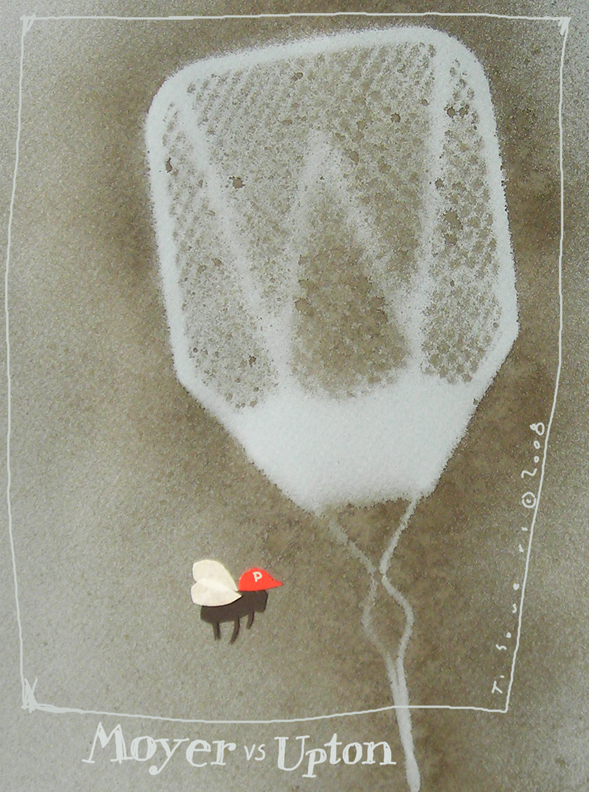 Well, you know, sometimes the swatter misses.
That's what Jamie Moyer's going to be banking on tonight.
He's made a career of being that kind of pest-pitcher, buzzing around the corners of the plate making big bats go crazy trying to hit him.
It's a compelling story, old grizzled vet vs. guys at the invincible age, and while I don't have the highest hopes for the old timer, I'm gonna watch tonight just to see.
In other news, Bob Brenly has interviewed to manage the Brewers, and that brought up a bunch of talk about Mark Grace coming to team up with Len Kasper and do Cub games instead of Diamondback games.
I like Grace, but I've so come around to Len and Bob doing the games that to me it would be a shame.
On the other hand Bob Brenly deserves another chance in the bigs.
If you read this blog, you probably got the hint that I thought Ned Yost was a boob, and who knows what Brenly could do with that team.
They get a new catcher, figure out how to keep Sheets healthy, maybe get a little more pitching or somehow keep Sabathia and well, that'll be just a little more frightening for us.
Okay, it's SUCH a crappy morning I'm going to try and lift spirits around here with a strawberry waffle morning.
And I'll be thinking about Moyer today.
It'll be amazing if he can pull it off. 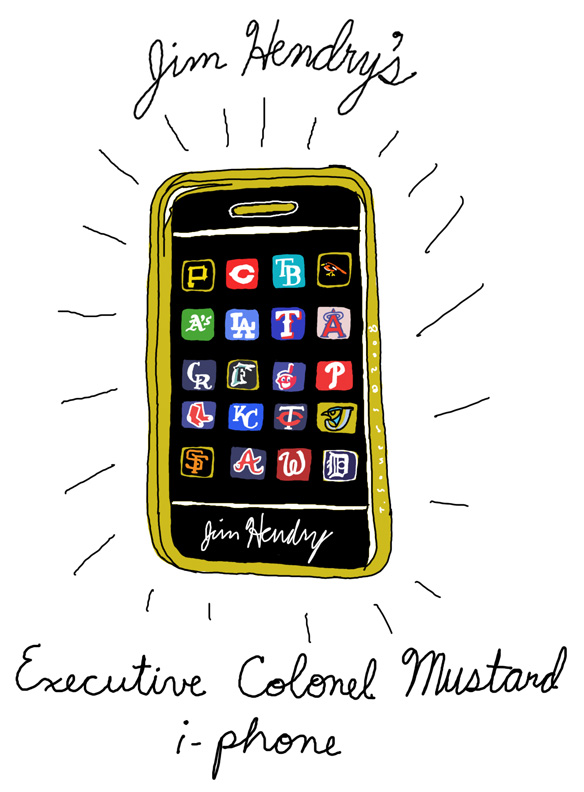 Ahh, I'm makin' this all up.
But imagine the unlimited minutes Jim Hendry uses on his phone.
Gotta be astronomical, right?
Gets a 4 year contract, I figure he DEMANDS they throw in the phone too.
God knows, he'll be using it enough.
But then I thought well, lots of people have unlimited minutes, and where's the status in that?
I think phone companies ought to wise up and be like the airlines - rank people by how many minutes they use.
You use a ton of minutes, you should be... recognized with a special status like gold or emerald.
Only, it would be awesome if their status levels were tied in with something cool, like a board game.
A board game like CLUE.
So the ultimate phone minute status level would be Executive Colonel Mustard.
You average oh, I don't know...1000 minutes?
You've achieved Mrs. Peacock.
1500 and you're Mister Green, 3000 and you're Miss Scarlet.
5000 minutes and you're Professor Plum.
Apple could start making different colored status i-phones, so when you see somebody with a plum phone, you know they're crazy on-the-phone people.
And when you get to Executive Colonel Mustard well, they have special cafes for you - cafes where Mister Green is not welcome.
When you achieve Executive Colonel Mustard, you can kick other people off the signal because, obviously, your calls are more important than theirs.
Steve Jobs, Mick Jagger and Jack Nicholson would be Executive Colonel Mustard, Evangeline LIlly's probably Plum, but you might run into a George Clooney or an Angelina Jolie at the Colonel Mustard Cafe.
Okay, maybe the CLUE thing is too much, but if I was a phone company guy and I read this post well, I'd surely be figuring out a way to make status be part of my service.
Any clown can buy an expensive phone or unlimited minutes.
But achieving Executive Colonel Mustard?
Come ON.
That would be so ultimate.
Okay, so World Series game one just ended as I write, and the Phils come out on top 3-2.
Pitching wins (what is the saying about winning with pitching, someone help me).
Cole freaking Hamels gives up 2 runs on 5 hits over 7.
Ah well...
I figured out tonight when the Series came on that I'm just going to continue to be pissed about the Cubs continuing to be late to this stage.
So I'm going to try and not think about that.
Thus the whole Clue/Phone thing above.
But I'm wondering, who is Jim Hendry on the phone to right now?