Note: I just read that the Cubs dropped game 2 to the Giants, and now have lost 9 of their last 14 games.
It's a nightmare, but they're still 2 1/2 in front of the Cards, and in some respects I think a couple tough stretches make a good club better.
And I since I haven't actually experienced these last painful games on tv or radio or Cubs.com, the hurt isn't so bad.
So, sorry if I seem blase about it.
Somehow, I'm gonna find the game somewhere tonight, though.
Okay, onto the fish story...

I have a past that includes a couple mild episodes of what I think must be Tourette’s Syndrome.
It's happened when I get a big adrenaline rush.
Once in a high school football game, I got flagged for pass interference and “foul language” literally 5 feet from our coach. I didn’t even realize that that "foul language" was coming out of my own mouth, but coach heard it all, and I got some gift laps to run later.
Another time I was working on print advertising for Busch Gardens, and the client sent me to the park to ride the rides and get feel for the place – it would help me come up with ideas for advertising.
They also gave me a pass that allowed me to cut in line anywhere I wanted.
I got in a car with a mom and 3 children on some crazy new roller coaster.
It took off like a bat out of hell and immediately went down an insane dropoff.
The level of hideous that came out of my mouth would have blushed Richard Pryor, back in the day.
When the car straightened out, I looked at the mom and said, “I am soo sorry – I have no idea why that just happened.”
Then the car went through a loop – de – loop.
Stared all over again.

Anyway, now I’m hooked into a giant fish.
“Rump p*ss m^therf@cker son of b%st$rd b+tch c#ck!” I said, loud enough for the loons to hear.
I fight him for I have no idea how long - probably wasn't as long as I thought.
And now I've got him up next to the boat - he's taking a breather.
He's also the biggest fresh water fish I've ever seen.

I realize a couple things immediately: A) my net is just big enough to go over his head and B) I left my camera in the cabin. 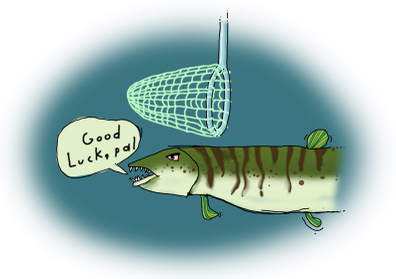 He takes off again.
Luckily, I had the drag set loose enough so that when it happened the line didn't snap.
Now he's somewhere under the boat, my profane mouth is going, and I think well, maybe if I just started up the motor and slowly dragged him to shore?
Bad idea.
I look around and waaay on the other side of the lake is another fisherman.
Now is the worst part of everything I did this day: I called for help. 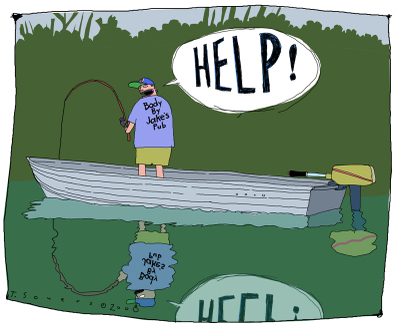 Don't tell ANYONE I did that because luckily the guy didn't hear so nobody knows.

I get him back next to the boat, and you know what?
It's time to step up to the plate and get that fish IN the boat right now.
He's taking another breather, floating there. I'm gonna take my toy net and wrap it around his head and...flip the rest of his body into the boat.
Right?
Just, net his head and..
Okay ready?
One...Two...THREE! 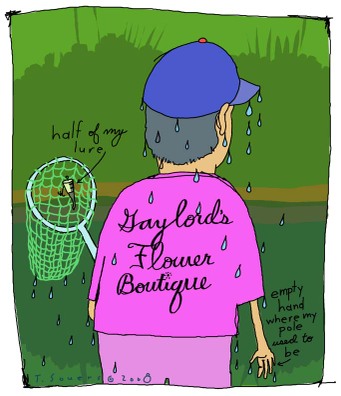 I was holding my pole in my right hand and the net in my left when my net hit the water.
But I don't think I ever even touched his head.
All I could see was an explosion.
And my glasses were blurry with running water.
And when it dripped away I was standing in the boat with half the lure still stuck in my net and no pole in the hand where my pole had been.

So much for stepping up to the plate.
Now all I had was a fish story - the joke kind where you hold your hands out as far apart as possible to show how big it was.
But I swear it's true.
That was 4 years ago, and I've been looking for that musky ever since.

What is the deal with the "Grand Salami"? Did a player actually call it that? (Saw the old DeRo painting...niiiiiice!) Last night killed me. Again. Our offense was completely MIA for 7 innings. Too little, too late.

Jeeeez! I laughed out loud at that story. The illustration of calling for help is classic...I don't know, something about the stance, the reflection of the word balloon...tremendous.

Reminds me of when I got stuck in my wet-suit and almost called for help from some other surfers. THEY saw me, but chose to show their concern by edging away from me...so as not to be infected by whatever it is that makes a person a kook, I suppose.

Great theory on good teams getting better by hitting a rough spot. I'll go along with that.

"You all know me. Know how I earn a livin'. I'll catch this bird for you, but it ain't gonna be easy. Bad fish. Not like going down to the pond and chasing bluegills and tommycocks. This shark, swallow you whole. No shakin', no tenderizin', down you go."

"You all know me. Know how I earn a livin'. I'll catch this bird for you, but it ain't gonna be easy. Bad fish. Not like going down to the pond and chasing bluegills and tommycocks. This shark, swallow you whole. No shakin', no tenderizin', down you go."

Proclaims "Dammit...this is the year!"

Now I ask you: "Is this not the prototypical Cubs fan?!!!"

DB - no idea on the salami thing. Probably Yogi Berra...
Rob - I had to eat glass and punch a black bear afterwards to get my manhood back.
Don - one of my favorite scenes of all time. I read the book about the sinking of the Indianapolis - sooo terrifying.
Bud, now look what you did. I hadn't thought about the musky quest like that at all. Now, if I don't catch him, it'll be some awful metaphor in the back of my mind for this season. Okay, I'm getting back on the lake RIGHT NOW.