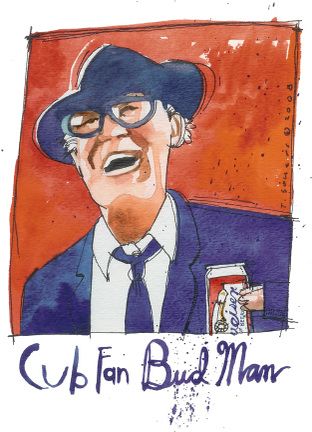 This painting comes from a Bud commercial that ran in the '80's, if you're old enough to remember.
I'm in advertising and plenty old enough, so I remember it well.
I was in NY shooting food insert shots for a chocolate cake commercial.
At the end of the day I asked the production company to find me a bar that had the Cubs on, because it was the first ever night game at Wrigley, the famous 8.8.88 game.
Surely you know the story - 3 1/2 innings, the rainout, all that.
(The next night they'd actually play the Mets and win 6-4, but this night the game was against the Phillies on WGN, and people in New York didn't watch WGN.)
So this wacky commercial featuring Harry dancing around in Blues Brothers attire singing I'm a Cub Fan I'm a Bud Man was a local commercial for Cub Fans in the Chicago area - I wouldn't doubt if it only ran on WGN.
The game comes on, the rain comes, everybody in the bar is bummed, and then...Harry's commercial comes on.
I was sitting in a real, live, honest to God focus group of people who had never seen this thing.
The whole bar got quiet as they watched, then a couple people laughed and then the whole bar went absolutely coo coo knee slapping out of their minds drool-laughing.
It was truly one of those lucky things where I got to witness first hand the power of Harry on Harry virgins, and it was an awesome thing to behold.
Sure some of them knew who Harry was, but they had no idea, really.

Anyway, thank you for letting me spout out that story, and I hope tonight that you raise a can to the coolest man ever behind a mic at Wrigley Field.

Wolden: May the power of Harry be with you, brother.

And also with you.