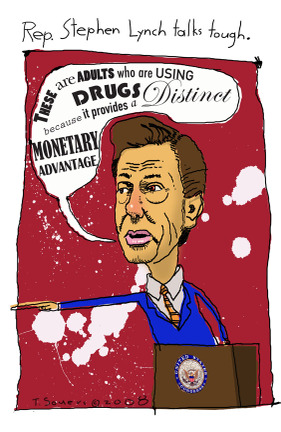 I didn't watch, but read Jason Stark's blog as it was going on.
Read it if you have a minute - Stark's good.
Anyway, these professional government people, you do not want them pointing fingers at you.
You do not want them asking you questions.
This guy Lynch (appropriate name, right?), his legal take (paraphrased by Stark) on people taking steroids is pretty...legal sounding: using steroids to gain a monetary advantage!
Doesn't that mean like, stealing?
If I'm Roger Clemens, I'm worried about my legacy...being called a cheater...a liar.
Lynch's thinking means Roger ought to be worried about being a thief.
Gulp.
But it sounds like the Congressional guys are going to let the Baseball guys attempt to clean this up, unless you lied to them already...(pretend like I made a cough noise that sounded like "TEJADA!")
Yesterday, I opened the little fridge in my office for the first time since the Holiday break.
There were 2 guys in my office, and I thought somebody'd silently and deadly-ey cut the cheese.
It was awful.
But no - there was an old salad in the fridge, and man it was rank.
Reminded me of this steroid thing.
Selig and Fehr, they gotta get rid of this stink.
Okay, Cub Convention coming up, I can think about nicer things.
Like baseball.

If Only Tony Romo had OnStar Emergency Service 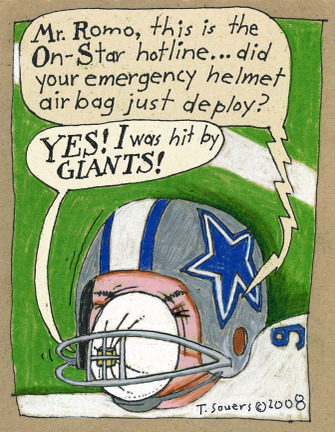 Say all you want about Jessica Simpson.
But that Giant D line absolutely overpowered, manhandled, and whupped the Cowboy offensive line.
And that's the reason Tony Romo didn't play so well.
Nothin' to do with Mexico or double d's or any article by US WEEKLY.
Oucheewaawaa, did they get beat.
I just heard Terrell Owens on ESPN radio, he said something like..."you guys can talk about his (Romo's) vacation, but that's not...WA...that's not...WAAAA...not FAIR...WAAAAAAAAAAAAA!"
Not often I laugh that hard when I'm stuck in morning traffic.

So, the Packers.
And their...fans?
I am so gonna hear it.
But if this plays out logically and it's Favre vs. Brady in the Bowl?
That'll be some good television.
Yes I'm a Bears fan and yes it's in my genes to dislike the Pack, but Brett Favre has earned some kind of elite status that no Packer in my lifetime has achieved.
And if you're a Bears fan and you can't acknowledge that, then well...you can't, I guess.
I just admire the guy.
So, totally looking ahead, but if it comes to a Pack/Pats Superbowl I'm pulling for the Old Man.

Carlos Zambrano: The Nicest Man In Town (In The Off Season) 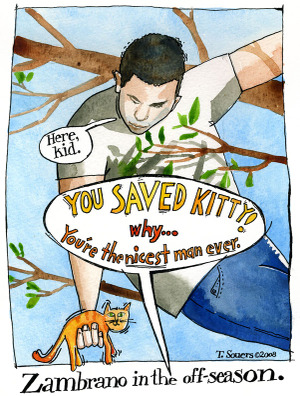 That's right.
Saving poor little curious kittens...carrying groceries for old ladies...mowing Mrs. Gower's lawn when she's away taking care of her sick cousin.
These are the kinds of things our Carlos does in the off-season, to balance out the days when he's throwing 98 mph fastballs in the chin area of various Cardinals and Brewers.
The days when he scares the BEJESUS out of other men playing professional baseball.

Ahh, just kiddin'.
Thought I'd make up something nice instead of another mean painting about Roger Clemens.

By the way, if you're using the Amazing Do It Yourself Spring Training Counter Downer, you should have 96 Q-Tips in your holder thingy. 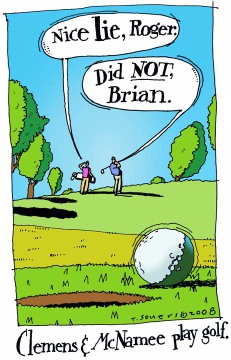 Not alot going on today, except for the big trade maybe about to happen with the Orioles.
Supposedly Cubs get lefty leadoff 2nd baseman Brian Roberts for Sean Marshall, Sean Gallagher, and Ronny Cedeno, which right now looks like one Sean too many.
But lets see what happens for real and I'll talk to you then.

In the meantime, a word from the grave...

"Did you walk outside the last couple days?
Felt that Spring-like temperature?
The last time Chicago had that much of a freak warm spell in January was one hundred years ago.
The same year the Cubs last won the World Series."

(Acutually, I'd never have known except for an email from Annie Maim, who heard it on the radio.)
Once again, I think that's a good sign.

Put Andre Dawson In The Hall of Fame! 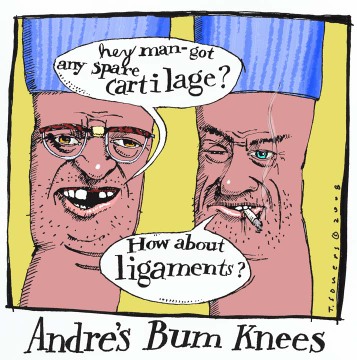 I don't have any of the actual shirts, but the drawing re-created here was my first t-shirt ever.
Sold it on the sidewalks around Wrigley in 1988.
Andre Dawson came here to prolong his career by playing on Wrigley's soft grass, and his bum knees were a big story.
Still, holding up this t-shirt and yelling "ANDRE'S BUM KNEES!" at complete strangers...just uh, not the most understood t-shirt ever made.
Think I sold about fourteen.

Mid-80's, the only place we'd go was the right field bleachers, sitting behind Keith Moreland.
Flynn and my brother Grog were bartenders at Gamekeeper's.
I went to work, those guys could sleep til noon and then drag coffee and a sports page to the sunny bleachers before it got crowded.
Every day.
Pricks.

When Andre Dawson did that thing with the blank contract and sort of forced himself on the Cubs, we suddenly had a real superstar to bow to out there.
The first time I heard the term "rocket" applied to an arm, it was his.
NOBODY would run on the guy.
And that's just his arm, man.
He was the complete player, an absolute all around stud who amassed SUPERhuman (yet all-natural) stats.
While some don't think his numbers are hall worthy, you have to consider he did all this on knees that were in a constant state of decay - like he was dragging a ball and chain around all the time.
Anyway, I think he should be in the Hall, and hope it happens today.

Over at LOHO, they had a spirited chat and vote about it, and here's one of the things host Cubbie Julie had to say (you all know what a giant self absorbed jag HOFer Joe Morgan is, right? That's why I LOVE this bit from her).

"And yes, I realize that Joe Morgan was an infielder, but this is still fun to do:

So Joe, you probably don't have to worry about "lowering the standards" of the HOF if Andre gets in."

Andre's Bum Knees.
Get it?
So instead of money, the knees are begging for cartilage and ligaments!
Ha!
That is just so damn clever! 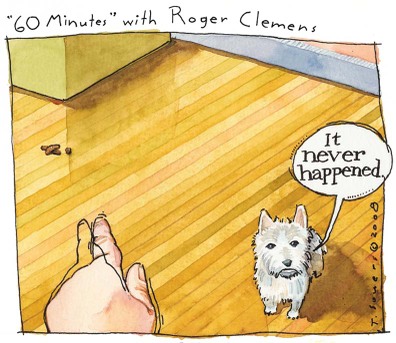 If you didn't see it, you missed nothing.
I've had the same conversation with my dog.