« Abe Lincoln: Come to the Cubs, Kosuke Fukudome | Main | The Mitchell Report - Sounds Like a New Gossip Show on E! » 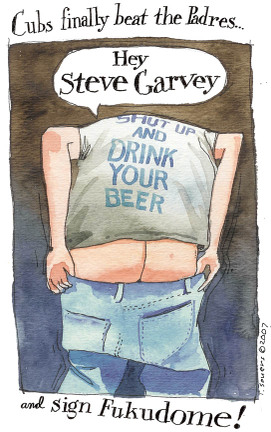 Ha!
I've been waiting for an excuse to moon Steve Garvey since October 6th, 1984.
If you don't know why, go here.
That's a little negative, so let me start again.

In competition with each other over Japanese right fielder Kosuke Fukudome, the Cubs finally outbid the San Diego Padres last night and signed him to a 4-year deal.
It seems like that's like the 1st time the Cubs have beaten the Padres at anything in about 3 years, and of course I have deeper issues with the Pads related to 1984 and not limited to Steve Garvey.
(I just really really dislike the Padres...)
So, after much talk and anticipation, Kosuke is the big fish Cub GM Jim Hendry went after and caught.
I found out about it on LOHO about 11 last night - those guys are quick!
It's alot of dough, but I think Fukudome's a giant leap in outfield talent compared to last year's right fielders.
Plus, it's cool to have that global thing going on with my favorite team.
Go Cubs.

Really... can you still hate the Padres? I mean... with all of my favorite players in the last few years ending up there (Maddux, Walker, Barrett), a win for the Padres kind of feels like a win for the Cubs.

Hi Liana. Dislike the Padres? Man, can I ever. I mean, I'm happy for the continued success of Greg Maddux, Walker and Mr. Barrett. But the organization will forever be on my most-disliked list.
I'm just guessing Liana, but I would imagine that you were too young to actually watch that '84 Cub disaster from...a barstool? Because it was as awful a thing as you could possibly witness.
I was a baby art director, and I'd just sold my first commercial. I went to Los Angeles with mixed feelings as they showed Chicago on the news with everybody going CRAZY.
Then, I came back and sort of jet lagged went to a bar on Lincoln and watched the final loss.
I'm actually a really nice guy.
There are some things I just can't get over.
That was one.
Anyway, thanks for making the effort to comment.
It makes doing this blog so much more fun so please keep it coming.

Hey Liana - couple more things. A) I hope that didn't sound condescending - I take your comment very seriously. And also, what I try to do is something different than all the others. So yeah, this is a little over the top for just the Cubs signing a player, but it made me laugh.

I wasn't offended at all! And you are right, in 1984 I was too young to be watching the game from a barstool. I really enjoy what you do here, and I'm glad your post are still coming through the winter. Keep up the good work.

Thanks Liana. Man, I can't wait for baseball.