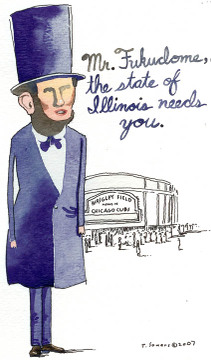 He may not be around today, but Abe Lincoln was at that last Cub World Series victory when the Cubs beat the Detroit Tigers in like, eighteen or nineteen hundred-something. Pretty sure I read that somewhere - he was this big Cub fan and there was the deal with the hat? Some guy yelled "Down with the hat!" and that became the familiar "Down in front!" we all hear today?
I think he threw out the first pitch for that series.
Anyway Kosuke, I am positive that if he were alive today our President would want you to play right field for the Cubs.
So put away any doubts about coming to the states and get on a plane, dude.
Chicago will welcome you with open arms.

The Chicago Cubs have thousands of fans all over the world. Here, I may consider myself as one of the big fans of this wonderful team. Whenever I’ve time I try to attend their games, though sometimes it becomes a little difficult to get Cubs tickets and this is due to these great fans that the team has. Chicago Cubs tickets are a little pricy or hard to be found but the team, as a professional and essential team of MLB, worth any price to watch their games. And when we love a team we try as much as possible these financial obstacles.

Allan - try to get tickets when they go on sale rather than using scalpers. It's a crapshoot - the online virtual waiting room, but I've gotten tickets almost every time I've tried.