It's The A-Rod Dress-Up Doll! 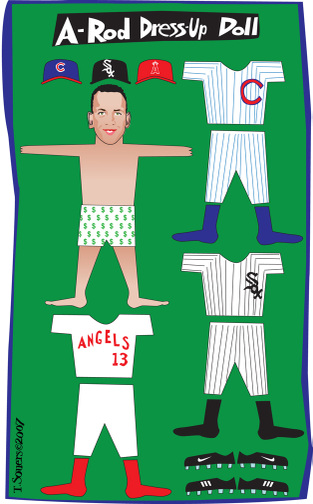 The A-Rod Dress-Up Doll!
It's the biggest new game in the country - even bigger than the World Series!
Seriously, I thought the World Series was really draaaging on, and I pretty much knew the Red Sox were gonna win, so I was like, can we please talk about something else?
Like an angel from heaven, super agent Scott Boras emailed the AP and let them know A-Rod was opting out of his contract, which of course got to my men Tim McCarver and Joe Buck, and thankfully they spared us amost a whole inning of baseball so we could listen to this fascinating story.
Which brings me to my new game...

Scotty Boras - you reading this post?
Listen, I believe I've hit one out of the park with this doll idea.
Dude, you're not just hooked up with sports guys, are you?
'Cause I could use an agent with your skills.
I think I'd like, oh say...GI JOE money for this thing, dude.
Call me. 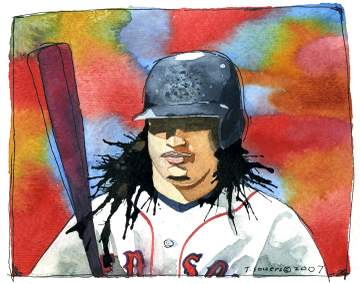 Manny Ramirez.
If I were to choose a "face" for this team, it would be his.
Red Sox sweep the World Series, Mike Lowell is the Series MVP, and the '08 season is in the books.

In the coming days I'll have more on this Boston team, the Cubs, the Bears, and A-Hole and his manager Scott Bore-Ass.

We've all read about the "humidor" at Coors Field - the one that keeps the balls "humidified".
It's supposed to work so that baseballs don't fly out of the park up in their altitude.
After the Sox victory yesterday, it just looks like it's gonna be time for cigars in Boston.
The victory kind.
Probably about midnight their time.
And the Rockies can keep their soggy balls.

What Getting Picked Off Must Feel Like to Matt Holliday 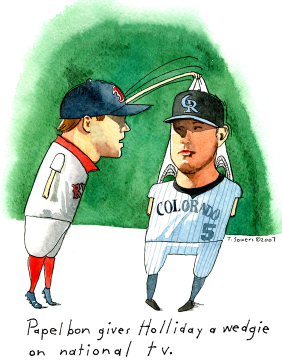 Ohhhh man.
It’s the World Series.
You’re down by one run in the 8th.
There are two outs with Todd Helton, your home run hitter, at bat.
You’ve just actually gotten a HUGE hit off Boston closer Jonathan Papelbon, so you’re standing on first.
You take a lead, but something’s wrong…Papelbon…he’s (I imagine it chaaaanggeess into sloooooowwww motiiiooonnn) noot thhrrowwiinnggg aa piittcchhh…hhee’ss tthhrowwwinnngg ttoo ffirrrsstt bbaaaassssseeeee aandd I ccaan’tt gggeettt bbaaaaackkkkk.
And now you’re crawling like a spaz-crab trying to touch that base, but you look up and the ump’s got his thumb in the air.
You’re so out it’s ridiculous.
Papelbon has picked you off.
On National Television.
It’s like he just ran over and gave you a wedgie in front of the whole country.

Me being sort of neutral, it was truly painful to watch.
When Holliday was getting up off the ground, he looked like he wanted to scream or cry – you had to feel for the guy.
“MONEY” is how Kevin Goff just described it to me.
He’s wearing a Sox hat, by the way.

The final score was 2-1 Boston.
And now, the hole the Rockies are in is almost grave-deep.

You Better Have a 97MPH Fastball to Sport That Beard 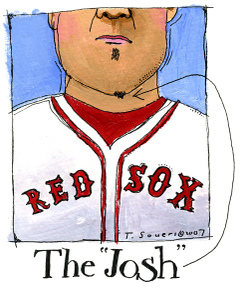 You know, he's 6'5" and weighs 220.
He's the biggest stud pitcher this season, this playoffs, this World Series, and maybe the last couple years.
Before he's done, he might be the biggest stud ever.
So if you're Josh Beckett, I guess you can do any damn thing you want.
Even that beard.
And I know he usually has a beard, but man he musta used the worlds smallest scissors to trim it like that.
As soon as the game started, I couldn't take my eyes off it.
I thought it was something stuck on my screen, or maybe old Josh didn't know there was a spider on his chin.
I mean, it had hair.
But only enough to cover a dime.
Probably, I'm nuts.
Probably, if the Series goes beyond 4 games and he pitches again there'll be people selling fake "Joshes" in front of Fenway for $20.
During the game we'll see a shot of oh...say Stephen King sporting one, or maybe Matt Damon and his wife Luciana both with one.
It'll become a rage, this mini upside down chin-pasty.

Okay, the game was semi-predictable.
The Rockies looked like they just got back from vacation, and Boston was clicking on all cylinders.
Here's hoping it's not a wipe-out, 'cause there are some cool kids on that Rocky team.
And there'll be no designated hitter when they go to Colorado...
But I also gotta say, when Dustin Pedroia hit the second pitch out, it was sort of deja vu.
Reminded me of the last Cub game I went to.
Ouch ee wa wa.

The Last 2 Minutes: What REALLY Happened 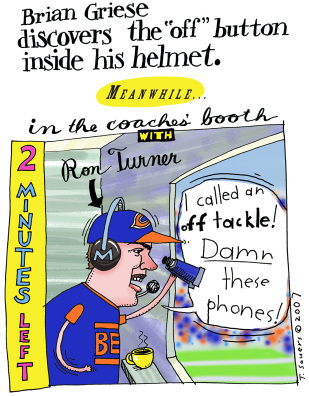 Come on.
We've all done it.
You're on your cell phone with your boss...you don't like what he/she's saying...you do the fake "static" noise, then say "I...CAN'T HEAR...YOU!" and hang up.
We got it right away, Brian.
The attempt in today's TRIB to give the coaches credit?
To say that the headset really didn't go dead?
Even more proof that it really did.
(Not that the play-calling up to that point wasn't proof enough.)
Don't try to kid an old kidder, Brian.
They're not calling you the "savvy veteran" for nothing.