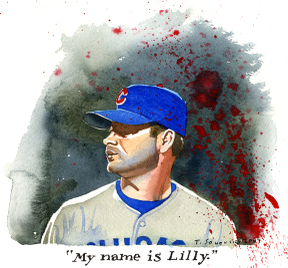 You can’t help but wonder that when Ted Lilly was little, he took some guff because of his name.
“Lilly of the Valley”, “Lilly-Liver”, “Lilly-putian” – stuff like that.
I’d bet that just like Johnny Cash's “A Boy Named Sue”, it worked to help him turn out this way.
He’s a tough guy who once punched out his own manager, he’s got this Clint-like stare on the mound that lets you know he ain’t backin’ down from any damn body, and yesterday he picked a whole Cub team up with both his arm and his bat and just wrecked the Cardinals 12 to 3.
Olson told me to turn on Emily’s stolen radio around 3:30, and I figured it wasn’t working right because I heard a voice saying “Cubs 7, Cardinals 1”.
But it was true.
Went to a meeting and when I got back, it was all done.
I guess the bats really woke up, with Aramis going 4 for 5, and D. Lee and Jones with 3 hits too.
So lets keep it up in Houston, boys.

By the way, when I was little there was a kid in my Boyscout troop with the last name Easter.
His parents named him Happy.
I wonder what ever happened to old Hap?

I'm not sure if you're aware that Happy Easter was a character in Steve Canyon comics. They are rerunning them one day at a time at http://www.humorousmaximus.com/steve/canyon.php

Love your blog. Your illustrations are fantastic. Love the washes. From one watercolorist to another.

Jeff - that's hysterical.
This kid was a scrawny little blonde guy, and just mercilessly teased.
About the washes - I stopped using cheap paper.
One watecolorist to another.

Wow...love that pic of TL. Any chance that we could use it on our webpage at some point? We'd gladly send the credit back your way and provide a hyper link..

Ted Lilly Fan Club: if you'd like to use the illustration on your site, please do the link back thing and be my guest.
I'm a TL fan as well...