You Kids Be Good 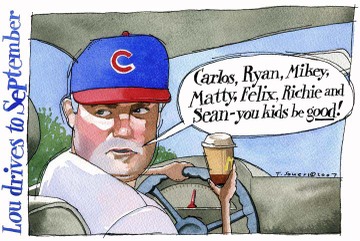 Well, the kids were pretty good last night.
Carlos Marmol, he’s one of the best relievers in baseball right now. How about striking out Prince Fielder with guys on 1st and 3rd?
And young Matty Murton came through with the big go-ahead homer.
I’ll only mention his error because if you were listening to Pat and Ron on WGN…you heard Ron Santo’s hilarious and amazing animal-moans of disaster.
The day before, I found the Cubs game on some station up here (I’m waay up in Wisconsin), so I figure that’s the station.
Now I’ve got the grill going, an icy cooler-Bud, the kids are playing, the wind is gone and the lake is a mirror.
I’ve been waiting all day for this perfect moment to tune in the game and…no Cubs.
It’s a Packer pre-season game.
In fact, there’s the Packer pre-season game on every freaking FM station except the one playing disco-polka.
I almost beat the dog.
Then, and I don’t know what is up with AM radio, but before the sun went down there were no stations to be heard.
After the sun went down I fournd the Score, ESPN, and finally the game on WGN.
So I got to sit in front of a camp fire by the cabin and listen to the game.
Dee. Luxe.
The only hitch was when D. Lee flipped into the stands and I almost hurled.
Otherwise, this game was as perfect as son Wyatt’s s’mores.
Come on, Lou, drive us into September. 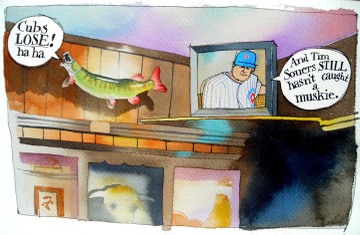 So, I’m way up in the North Woods of Wisconsin, up past Minocqua.
Went to a restaurant called The Flame last night where they have the “largest collection of stuffed giant muskie in the region”.
And they are – about 15 of them I’d say – all bigger than you can imagine.
Loren Burgess caught a 51 inch, 36 pounder in Flambeau Lake, in fact.
Anyway, watched the game with a couple Brewer fans.
I thought when Weeks fell down rounding 3rd, given some of the late magic the Cubs have mustered lately, that the game had turned.
Wrong.
Ryan Braun smokes the double, Big Z is finished, and then Eyre doesn’t look too hot giving up the rest of the runs.
And I discover once again how friendly the local people are when I’m in their city watching the Cubs lose.
So the Brewers are a game and a half out, while the Cards lose and stay at two away.
Cubs still in first.
And I still haven’t caught a muskie.
Here was a cool thing though.
When you’re watching the Brewer channel, they have a thing where they name some Wisconsin bar the “Tavern of the Game!”
Awesome.
Last night it was someplace in Janesville.
Okay Ted Lilly, get back to winning, dude.
You’re facing a guy named Manny Parra, who has pitched 23.1 innings this year, given up 22 hits and 10 runs.
Go Cubs.

Felix Pie: Fight for your Right to Party 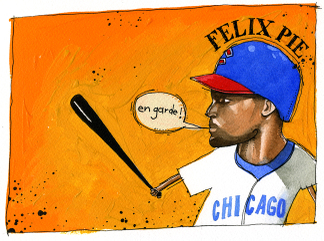 It’s killing me watching this guy struggle at the plate.
I still think when he’s in center, the pitching staff is waaay better because he catches everything hit out his way.
He’s electric.
The energy he adds to the team can’t be measured.
It’s just the stupid bat.
Get this guy on base and he’ll create mayhem with his speed.
So Felix, pull out the bat and fight with it.
There’s a big party happening in October, I’d love to see you there.

Gimme Some Hair of the Dog From ‘03 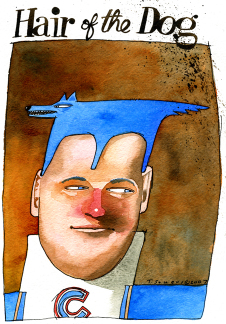 Say what you want about the 2003 Cub season, but I say it was the greatest in my lifetime.
I am aware of the cursed ending, thank you, but…
If you were lucky enough to get to Wrigley when they clinched or during any of the playoff games, there was something in the air that was the greatest feeling in the world.
And I got a shot of it.
And I’ve been waiting for another ever since – a little hair of the dog.
Seriously, this ’07 team has been an evolution from the get-go, and I’ve always felt like old Lou was on a multi-year plan to get what he really wanted on the field.
Look at the different line-ups.
It’s only the dawn of man for this team.
But they still ought to do something more than have an interesting season.
I can’t take the Reds seriously.
The Cards, this year they should be just that – a house of cards that this Cub team should be able to topple.
The Brewers seem to actually have the horses, they just got out of the corral.
Lets hope they stay out there wandering over the next 3 days.
Because I need a shot, bro.
A little hair of the dog of ’03.

Soriano Out: What I Miss Most 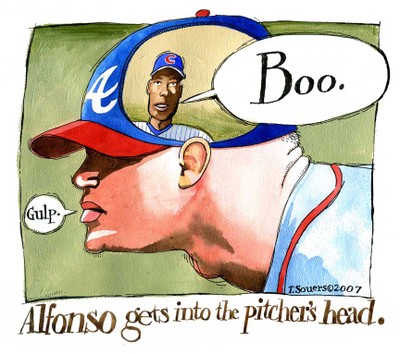 What do I miss most about not having Soriano?
It’s what he does to the opposing pitcher.
Whenever he comes up, I figure the pitcher is thinking something like this: 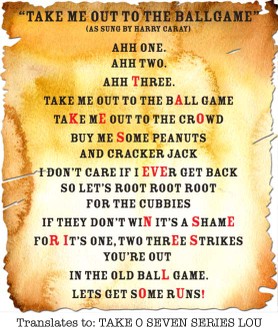 Well, the signs are everywhere.
For instance, did you know that Lou Piniella rhymes with “You win, fella.”
Or…“the WINdy city” – explain that.
But this…this is just plain freaky: “TAKE 07 SERIES LOU” can be found hidden in “Take Me Out To The Ballgame”.
Like “The DaVinci Code” or something.
That message has been secretly embedded in our seventh inning stretch, ever since Harry Caray first uh, sang it.
It makes you wonder if it isn’t actually Harry…communicating with us since it is basically his version.
The thing that’s so weird is I always sing it like Harry did, with that “Ah one, ah two, ah three” up front and the “Lets. Get. Some. Runs!” at the back.
So, I shoulda noticed this long ago.
Since I didn’t, here’s a big “thank you” to Jonathan Linton, who did.
He must be some kind of lyric-puzzle genius, figuring it out after hearing Eddie Vedder sing it at the Vic recently.
Okay, so the Cards win two, Brewers win one and lose one.
The Cubs take the first two against the Giants, and they’re still in first.
Take 07 series, Lou.