Kerry Wood: Part VI (or so) 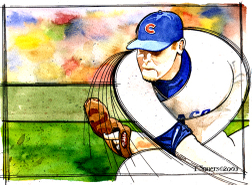 Way back when, remember how we were all told to think about the day Kerry Wood comes back?
“Hey, if you get anything at all from Kerry Wood, it’s a bonus.”
Well, that day is about to happen.
I still agree with the bonus part, because the use of the word “bonus” in that context implies something statistical.
Strikes and balls.
Math.
What they didn’t tell us was what this will mean to human beings.
Hearts and souls.
Cub fans.
There is nothing in the world I’d rather see than Kerry Wood come back and…I don’t even need a ton of strike outs.
Just pitch.
After all the guy’s been through, I can’t imagine a happier story: happy for him, happy for us Cub fans.
But I’m afraid this is going to be like watching one of those movies people like to email around.
The one that starts with the kid getting on a skateboard aimed down a second story roof.
It’s either gonna be a glorious ride or…something else.
Anyway, they say on Thursday old Kerry’s gonna be back on the team, back on the field, back on my tv.
And back in my heart.
Here’s to hoping he doesn’t break it.

The Cubs are right behind you, Ned. 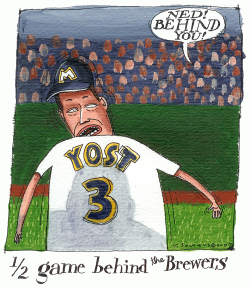 All teams say something like, “We just have to pay attention to ourselves and everything’ll take care of itself.” (I think they teach players and managers that line in Pro Baseball Media Talk 101).
But if you’re the Brewers, you’ve been looking over your shoulder for the last month or so, and it’s got to be un-nerving.
Over his 8 or so innings, Carlos Zambrano got more hits by himself than he let the whole Red's team have.
That’s Babe Ruth stuff, man.
And with Derrek Lee suddenly poking out homers left and right, the kids mixing perfectly with the vets, and Mount Alfonso able to erupt at any time…if you’re the Brewers there’s only one thing to say: “S%*@!”

Yeah, there’s that beaten-down, insecure loser voice that I can’t make go away telling me watch out: the Cubs may never even get to first you idiot!
But right now I prefer to listen to the voice saying that August is when the men are separated from the boys – a challenge to both the Cubs and Everybody Else.
It's the voice of calm.
The voice of confidence and experience.
I’m listening to Lou Piniella.

Alfonso Soriano, Derrek Lee, Aramis Ramirez, Cliff Floyd.
And the Cubs have 8 homers in July.
That’s paranormal, supernatural, and wrong.
Isn’t there like, a ghostbuster or something who can figure this out?
There have been 11 home games (where I guess the wind could have been blowing in every day), and 11 away (Washington does have the faraway fences).
But man, these guys should be cranking them out, right?
Well, I’m not gonna complain about how they win, as long as they win.
And I don’t know what it is about these freaking Reds.
They just seem to have the Cub’s number – they’ve won 5 of 7 this year.
And tonight it’s Aaron Harang on the mound for the Reds.
He’s um, really seriously good.
But the last time the Cubs faced him, he only lasted 4 innings and gave up 5 earned runs.
Now, that's a mystery.

The Thrill is Gone 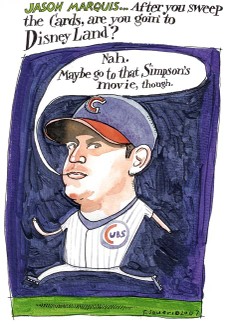 Well, the thrill's not completely gone.
Sort of turned down to medium.
While I don't completely believe the Cubs right now, I do believe that the Cards - they've really lost a step.
And like beating the White Sox, the Cubs should beat the Cards.
This year at least.
That is one beat-up team down there.
But, how about Ted Lilly with the 7 straight wins?
And the two-out runs the Cubs have been getting...
And, what is up with all the perfectly combed hair and tucked in red polos in St. Louis?
Those are the weirdest crowd shots, like time stopped when men wore shiney white leather dad-shoes.
Anyway, my boldest prediction?
The "Simpson's Movie" is the runaway smash hit of this summer.
Nobody doesn't want to see that one.
I'm totally bringing donuts.

Aramis Ramirez and the Wand of Fire 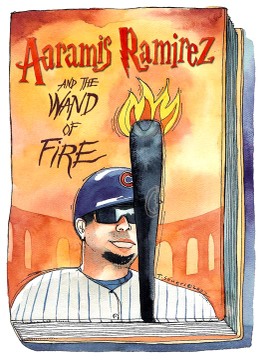 I don’t know about you, but it’s HARRY POTTER time at our house.
The latest book just came in the mail, and the kids are already knee deep in it.
Looking at this Cub season, you have to think that the great wizard Professor Pineilla is doing a bang up job. The Weasley Twins, Fontenot and Theriot, are getting into their usual mischief, and shape-shifting Mark DeRosa continues to amaze.
But if anybody’s having a Harry Potter season, it’s Aramis Ramirez.
He keeps wielding the bat like he has recently, and he’s serious MVP material.
Last time I looked, he had 95 hits, 16 homers, 64 RBIs, and a .322 average.
But the difference is the clutch nature of his hitting this year.
He’s been unbelievable.
So the Cubs drop 2 of 3 to Arizona, wrecking just a little bit of my fun.
But still…I’ll take a 7 win out of 10 game home-stand any time.
Okay now Cubs, get back on your brooms and keep this season interesting! 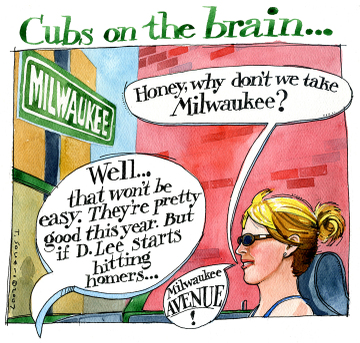 My wife Kim, she often suggests what road we should be taking.
It's usually in the best interest of whatever trip that may be to...follow that suggestion.
This day, we were going to an outlet place to look at a red couch, and I was thinking about the Cubs when she suggested the above route.

The Cubs are only 2 1/2 games behind Milwaukee now.
I'm totally going to heed Lou Piniella's suggestion.
The one about not getting giddy over the Cubs in July, that there's still a long season, there's plenty of baseball left, all that.
It just struck me because when a member of the Cubs says anything about "a long season" or "plenty of baseball left", it's usually because the Cubs are oh, say 11 games out and we're talking about digging out of a hole.
When I walk down the hallway at work, I look at other people who, like me, are a little more than your basic "casual" fan, and there's this look we're all giving each other...
Nobody's dancing in the halls or yelling or anything.
But there's a meaning to this simple look that's doing all that.
I'm having so freaking much fun this year.
Anyway, Lou is a god.
So is Aramis.
Cubs beat the Diamondbacks yesterday 6-2.
Young Mike Fontenot was the sparkplug, Marquis pitched well, and even Jones was an important factor.
The Cubs are the hottest team in baseball, and I am not giddy.