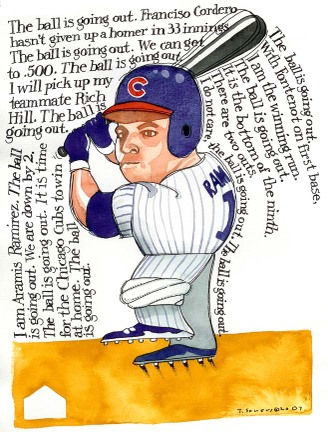 Cubs vs. Brewers: The Set-Up 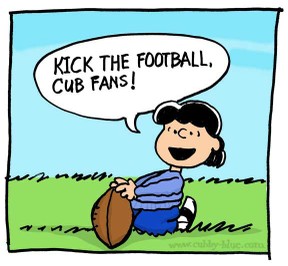 You know this is the set-up today, right?
Usually, I’m a happier man if I don’t think too far ahead, but if the Cubs don’t do well during this series then…Lucy yanks the football and we all go flying.
So Rich Hill, you gotta man up today, bro.
Here comes the first place, red-hot Brewers.
...did I say Brewers?
That is so weird.
(Oh, and apologies to Charles M. Schulz) 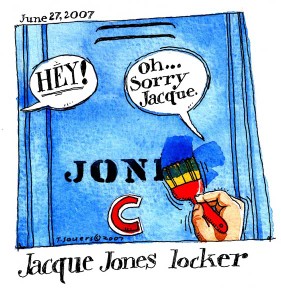 Man, how awkward would that be?
The trade of Jones to the Marlins fell through.
He’s a dead man walking, hung out to dry, all that.
Jacque knows about it, all his teammates do too.
It’s just a matter of time before he goes.
I’d feel sorry for him, but…not really.
Anyway, Cubs 8 Rockies 5.
Winning streak at 5, and today Carlos Zambrano’s on the mound.
Get out the brooms for the second time in a week!

Pagan and Uribe: Obstruction Collides with Confusion for Stupid Man 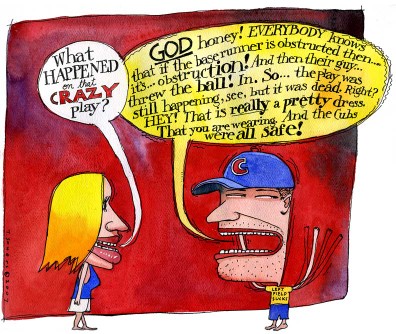 After the play that started with the DeRosa hit to right, had the Pagan/Uribe bump, the outs, the umpire conference, all the Cubs being put back on base, the Ozzie argument, and the Ozzie toss, I went in the kitchen to get a Bud.
My wife Kim was in there.
“What happened on that play?” she asks.
I’d just gotten done watching it.
And I’m a man.
SMART MAN would have said, “You know dear, I’m really not sure. But all the Cubs were safe and the guys on tv are acting like it makes sense, and it was entertaining as hell.”
STUPID MAN would have done what I did, for I am mostly STUPID MAN.
I explained it to her without really knowing what I was talking about.
Sometimes, STUPID MAN can do this and not get called on it.
Other times, STUPID MAN does get called on it and turns into ANGRY MAN.
I’m sure I ended the conversation with something like, “…ALL I WANTED WAS A STUPID BEER.”

Next – did you see the Cubs blow the giant lead over the Rockies in the top of the 9th last night? Where Scott Eyre came in and couldn’t stop the hits, and then Bob Howry, his arm taxed by the workload from the Sox series, comes in and gives up the lead?
Normally, I’d try to break the tv with the force of my pushing the “off” button.
But I was happily doing the painting I’ve posted here.
So when the absolutely improbable happened and the Cubs (Soriano!) got two runs back to win (in the bottom of the 9th!), it was just too late to do the painting for that game.
And you’re lucky.
I was going to paint myself throwing up my own heart and then happily eating it again.
Because that’s exactly what that game felt like.
Okay, 4 games in a row.
What weirdness can happen today? 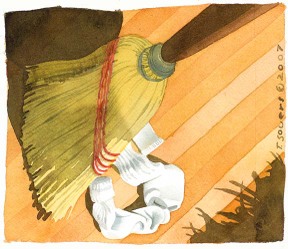 You have no idea how long I’ve waited to paint this particular painting.
On the other hand…
Yes, it was the White Sox so it was a big deal.
But they’re also a team in the grip of a full-on death spiral.
The Cubs should have beaten them.
They did.

They’ve got a 3 game winning streak going.
So, keep it up, boys, cause you’re still waaay in the hole.

Okay, in the spirit of this season, when you gotta celebrate when you can: Go Cubs.
I did yell my Cub head off.

And lastly, I’ll raise a glass to Rod Beck with anybody who wants to. 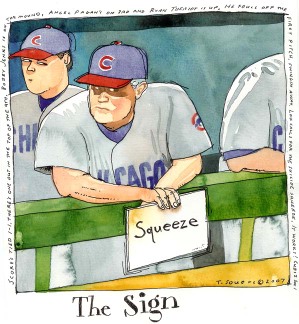 The sign.
The squeeze sign.
Pagan’s on third, the score’s tied in the 9th, there’s only one out, Sox stud Bobby Jenks is on the mound, and Theriot’s up to bat.
The squeeze should have been obvious (if for no other reason than the circumstances were exactly right).
But I guess it wasn’t because…it worked.
In fact, everything that Lou touched yesterday turned to gold.
And gold, I’ve learned, is the last thing to expect this year.
All the money was on the table – exactly the kind of thing where if it doesn’t work it’s a DISASTER.
Confidence, team psyche, whatever you want to call it – if this squeeze doesn’t work and the Cubs go on to lose it would have been more than digging yourself into a hole.
It’s hole squared.
But it worked.
Maybe this suicide squeeze sign is actually a sign of a bigger sign.
Maybe at the end of this season we look back at this little squeeze play and say, “that’s when everything changed.”
Maybe it has.
Cubs 2 Sox 1, Cubs up 2 games to nothin.
Okay, how’s about a sweep today?