How to lose 500 man-points at Wrigley 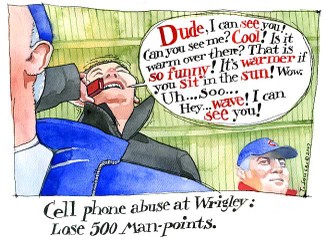 This painting is absolutely true - it happened right behind me.
I don't have a problem with cell phones at Wrigley.
You might really need to make a call.
But when you call someone else in the stands to talk about nothing while the game's going on well, you might as well dance when they play "YMCA". 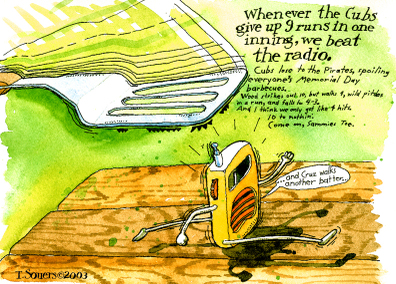 I'm out fishing today - thought I'd put this drawing from 2003 in here.
On Memorial Day in 2003, the Cubs got spanked by the Pirates 10 to nothin.
Kerry Wood got the start and gave up one earned run through seven innings, but then Phil Norton, Juan Cruz, and Antonio Alfonseca gave up 9 runs in the last couple innings (you can look it up in the Baseball Almanac).
But the Cubs were 28-22, in first place, so it wasn't too bad.
Sammy Sosa was out with an injured big toe, and in a short time he'd come back and get caught with a corked bat.
As I recall, I smoked some ribs that day.
They were pretty good.

This guy doesn't remember me, but I sit right around the corner from him.
Our seats are up pretty high, but the view is amazing and I can get up at the end of an inning, head on down and get a frosty cold Bud and a dog with grilled onions from him, then go sit back down without missing a play.
Even though this joke is pretty corny, when he says this to you live and in person you'll laugh out loud.
I have about a dozen times. 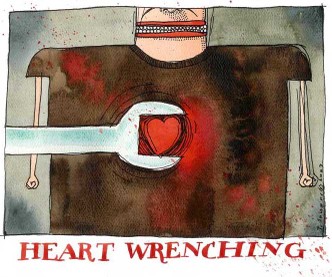 Last night was heart-wrenching in so many ways: watching another totally solid pitching effort wasted (welcome back Sean Marshall!), watching smirky fat man David Wells not lose, watching all the scoring opportunities go for nothin, watching the 9th consecutive loss to a team I hate losing to, and ironically all the while also trying to watch the season finale of "LOST".
How about gonzo wildman murdering Hurley crashing through the forest in that old VW van and running over the lead "other"?
And I'm so slow it took 12 year old Wyatt to explain to me that the "flashbacks" were actually "forward-backs".
I still love that show.
But I'm not lovin' this road trip.
It was June 5th, 2005 that the Cubs last beat the Padres.
Now, that's heart wrenching. 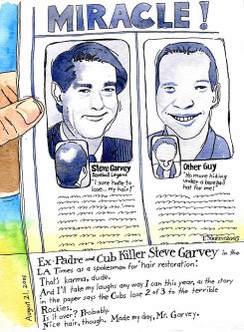 This was a couple years back.
I was reading a LA TIMES, and found a big ad with Steve Garvey as the balding celebrity that some hair replacement service paid to be their celebrity bald guy spokesman.
I didn't need Steve Garvey to be the (soon-to-be-balding) Cub killer Padre in the '84 NLCS to dislike him.
I thought he was a colossal ass (even with hair) long before that.
Anyway, I hope this bald celeb thing gives you the laugh it gave me.

It's a shame the Cubs couldn't pull off the sweep of the Sox (especially with Pierzynski and the grand slam), but this was still a pretty nice weekend.
Now, on to the West coast and the Padres, and lets see if Lou follows through on that thing he said about heads rolling (or something like that) on Monday... 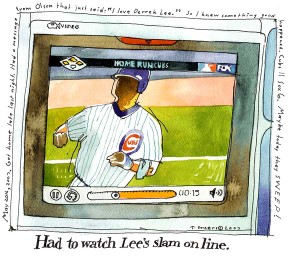 I was looking at my cell phone screen. It said that Marquis had hit a homer. That's when the flight attendant told us all to turn off our electrical devices, and the last I saw of the game.
When I got off my stupid 3 hour delayed American Airlines flight, there was a message from Olson.
"I love Derrek Lee" was all it said.
When I got home I watched the little video on Cubs.com...
It's been a pretty welcome weekend with these two wins over the Sox.
Everybody I know was sort of desperate after the Met Meltdowns.
Somebody told me that Lou was quoted as saying something like heads were gonna roll on Monday.
Interesting.
In the meantime, oh please baby please how's about a little sweep today?