I was at the office and got a call from Flack down in St. Louis.
He told me about Josh Hancock getting killed in a car crash.
I'm speechless.
And sorry for him, his family, and the Cards.

Tony LaRussa: not so genius without pitching 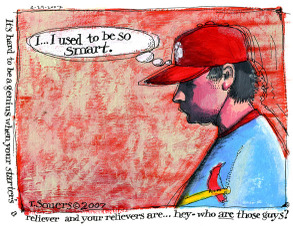 (Note: This entry was made before I heard about the death of Josh Hancock)
What a great weekend so far.
I'd never heard the term "crooked number" until I read "Three Nights in August" (buy it here - it's a great read), the Buzz Bissinger book about a 2003 Cubs/Cards series.
LaRussa uses it a number of times, as in he hates to see the other team put up crooked numbers.
A 7 run 5th inning...that's a crooked number.
Plus Carlos looks like he's waking up.
Friday had Pie's first homer, and Dempster getting the last 5 outs.
So lets see if the Cubs can sweep and finish April on a high note.
And I hope to see Mr. LaRussa doing the long walk out to the mound, maybe muttering to himself a little. 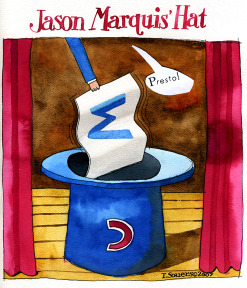 We were at his last victory.
Cubs 6, Cards nothin.
It was all wonderful, but man he got out of sooo many bad jams I could not believe it.
Maybe he's got that magic touch, though.
I hope so.
Lets see what he does tonight down in St. Louis.

And I'm not talking about Mark Prior except to say I'm just sick for the guy.
What a shame. 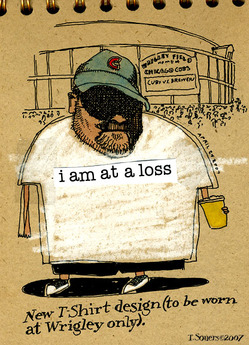 Me, Sutter, and David Oif went last night.
These home losses are just no fun.
Now, this t-shirt idea may seem shallow on the surface, but it's actually uh, deeper than usual for me (with the double entendre and all).
I really am at a loss.
We've got the right manager, we've got (I think) the right guys.
It's just...every game is sooo laborious.
Nothing is coming easy.
Last night, Derrek Lee got caught stealing third (he looked totally safe from the cheap seats).
Then, Aramis hits his 200th home run.
Derrek shoulda been an easy run, and it coulda been the difference at the end.
The harder part is on the players.
People were like, hate-screaming at Eyre, and we're gonna need that guy.
And poor Rocky Cherry's gotta start his career off being saddled with a tough loss.
It's just hard right now.
But, it's early. 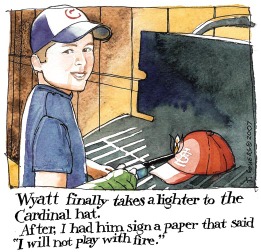 So, the Cardinal hat burning thing went well.
Then we (me, Emily and Wyatt - we only have 3 season tix) drove out to Wrigley.
Left our jackets in the car, because it was...summer out.
Had a round of dogs with grilled onions.
Both Em and Wy put ketchup on - have I taught them nothing?
First inning, Murton strokes a gorgeous opposite field single, and Michael Barrett hits the 3 run homer.
Wyatt says, "I guess the hat burning thing worked" then does his evil vampire laugh "MAA HAHAHAHAHA".
Jason Marquis looks semi-shaky, but gives up nothing.
In the second, Ronny Cedeno makes up for yesterday with a shot down the right field line that Pujols can't quite reach, drives in a run.
So it's 4 zip.
There isn't a 3 up 3 down inning until Marquis in the 5th: every inning's a struggle, yet the Cards don't score.
Then in the 7th he strikes out young stud Card left fielder Chris Duncan with the bases loaded and 2 outs.
Huge.
But the hugest guy today was Felix Pie.
(I will tell you right now I'm terrible with names, but...)
There was a Cardinal on first, and somebody (Kennedy?) hit a SHOT to center that's impossible to get.
Except for Felix.
I figured it shoulda been a double, and the guy on first probably scores.
Then the next Cardinal gets a single, so if Felix doesn't make that catch, a couple runs would have scored for sure.
So, I'm a Felix fan.
I wish I knew anything about stats, but I bet Felix in center makes the pitching staff 10% better.
Anyway, Cubs 6 Cards nothin'.
The day couldn't get any better.

Okay, I wrote the above yesterday.
Today, I mostly listened to the game while doing the Wyatt painting.
The Cubs lose 9-12 in an extra inning game that, had they won, could have totally changed April.
Plus Pujols hits the 3 run dinger to win it off Dempster, so...just the worst thing that can happen to Ryan, and everybody'll be calling for a new closer tomorrow.
But the worst thing was before the game, when Pat Hughes said that Ron Santo was in the hospital with a heart thing.
Some day, the Cubs will go to the Series, and I really really want to listen to Ron do that broadcast.
So Ron, get better. 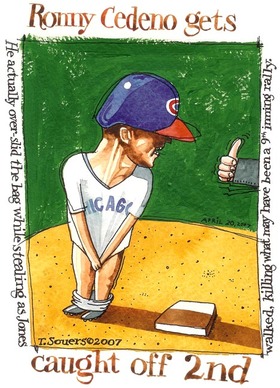 There's a song by Lou Reed called "Growing up in public", but the line in the song is actually "Growing up in public with your pants down."
Happened to Ronny Cedeno yesterday.
With the Cubs down by a run in the 9th and one out, Lou put Ronny in as a pinch runner at first.
I'm in my office listening to this on Emily's radio at really low volume, as I'm working.
I'm really listening to a writer/art dirctor team present some scripts (the writer, Jay Manheimer, is a Cardinal fan).
So I don't actually hear the play as it happens.
Jacque Jones is up, and I hear Pat Hughes say he walked.
Rally!
But then immediately Ron Santo starts making his painful noise that means something awful has happened.
Doesn't make sense, but somehow Cedeno is out at second on a walk?
Sutter calls, asks if I'm following the game?
Kinda, but I'm in a meeting.
Then, with a smirk, Cardinal fan Jay says the game is over.
So is the meeting.
I yell down the hall something about the Cardinals that I can't print in here.
And today the headlines are about the Cubs inventing new ways to lose.
How can you not know a guy walked when you're on first in the most crucial part of the entire game?
How can you miss the freaking bag?
Just another nightmare.
Anyway, today I'm taking Emily and Wyatt to our first game of the season, and it's against the Cards.
Added bonus: it's ex-Cardinal Jason Marquis vs. Anthony Reyes.
It's beautiful out, supposed to be 75.
And the festivities will begin with this: Wyatt and I will finally get to set fire to the Cardinal hat he bought last year specifically for this purpose. (see Cardinal Hat)
It's gonna be a great day.