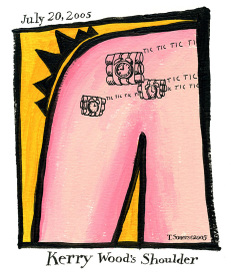 I originally did this illustration in 2005 (click on "2005" in right hand column).
This poor guy.
On the dl for the 11th time.
Yeah, we're all frustrated, correct?
But can you even imagine what it would be like to be Kerry Wood?
All that talent, and a booby trapped arm.
Just awful.
So maybe it's just scar tissue, but I'm not gonna think about it any more until he's on the mound.
Way too depressing. 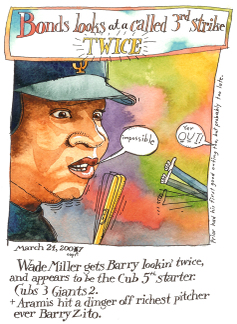 Wade Miller looked really good yesterday, not just pitching but in the field too.
A Greg Maddux-like double play starting with a pretty hard comebacker to Wade, who whirled and tossed to second.
(He also looked oddly Kerry Wood-like with the goatee...)
I heard a rumor about Miller being traded, but I'd be really surprised by that.
It's supposed to be 70 out today.
Think I'll dust off my fat-tire, one speed bike with the all important wwiiide old school seat, and get the kids outside.
See ya.
ps: I'm purposely not doing any mean-spirited Kerry Wood or Mark Prior entries.
I think there are too many already, and besides I still think those guys are gonna be pretty big before the season's out.
Much more fun being an optimist, guys. 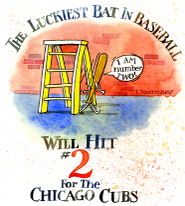 For all the baseball I've watched in my life, I'm still pretty much not so saavy.
I read about this in the Trib, and duh, it totally makes sense: whoever bats in the two spot for the Cubs is gonna be one lucky guy.
Soriano leads off. He gets on, hopefully lots. The opposing pitcher's terrified of his speed, so he doesn't want to throw anything off speed (or wild) and take a chance that Soriano's gonna take off. So, he throws alot of fastballs to the number two.
Derrek Lee bats third. Pitcher doesn't want anybody on base when Derrek comes up. If Derrek hits a homer, it'll be two runs instead of 1. The pitcher does not want to walk the guy up before Derrek.
So, he throws alot of fastballs to the number two.
Will it be Murton, DeRosa, or Jones?
I bet this is where the most tinkering will happen, but I'm hoping it's Mr. Murton.
He's a Cub.
DeRosa said that with Soriano leading off and Lee hitting third, everybody on the team wants to bat second.
I would venture to say it's more like everybody in baseball would want to bat second on this team. 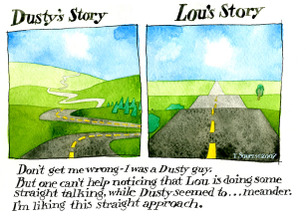 When the press asks Lou a question, there's no beating around the bush.
Really a nice change.
Not only for us, but probably there's nobody on the team who doesn't know exactly where they stand. 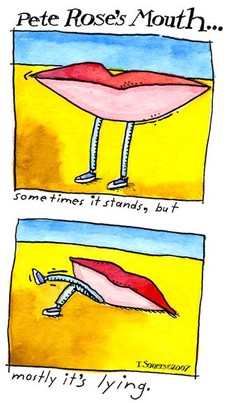 Well...not so much of a fan.
He's been lying for so long, I can't separate the sad, current guy from the ball player.
Do you believe him now? That he bet on every game he managed?
I think he'll change this story, too, since they're already poking holes in it.
The odds of re-instating him so he can get in the hall might be getting better.
(Unlike Ron Santo, Pete even gets backing from former team mate and Hall of Famer Joe Morgan.)
But Pete managing a major league team again?
Don't bet on it.

Carlos Zambrano…had I been watching live I would have had a heart attack.
I guess he was going for a triple, and somewhere between second and third he took a tumble and landed right on his left shoulder.
They showed a picture in the Trib.
Not pretty.

Ryan Theriot got the free pass from Manager Lou like, a week ago.
He’s been playing lights out (you could sort of see he was a player at the end of last season).
So Lou told him to relax and that he was gonna be on the team.

Mark Prior’s been a mystery.
Is he injured, is his head messed up, is his confidence shaken…stuff like that.
And he really hasn’t looked so good.
But I’m betting that he’ll be a big part of this season as a starting pitcher.
You listen to that guy, he really doesn’t seem to be lacking confidence.
Location on the curve?
Different story.
Wait til he says he’s got his mechanics right before you judge.