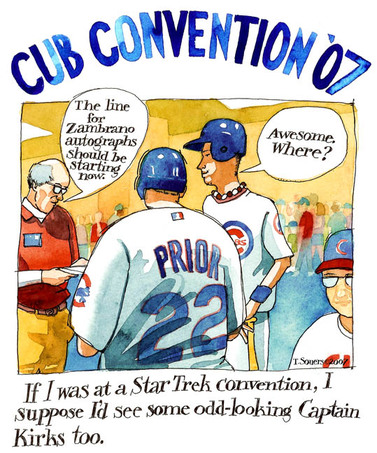 I'd actually never been to any kind of convention for anything before, unless it was for work.
So I didn't know what to expect.
The guy with the Kyle Farnsworth-like necklace here?
I swear he had on spikes too.

You'll notice that this Cub Convention acutally happened a couple weeks ago.
I'm trying to catch up, which I'll be doing for ever.
I was distracted by the Bears.
Today is the day after Superbowl XLI.
I watched at an Irish pub with my neighbor Garry Manning.
I was wearing my Bears hat, a Bears t-shirt, and had a tiny origami Bears star that my daughter Emily made me for good luck.
Man...Rex Grossman.
How do you ever recover from that?

Michael Barrett at the Cub Convention 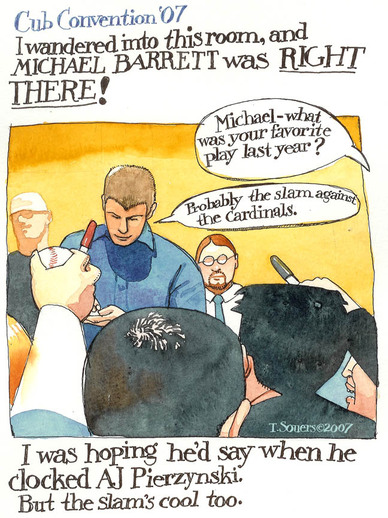 The guys at VINE LINE got me a pass to the convention.
So I was walking around feeling like, you know, a member of the press.
There were a billion Cub Fans all in the one hotel, and they all want to get autographs.
Lines were everywhere.
The autograph thing?
Thought I was simply above it.
Then suddenly I'm 10 feet from Michael Barrett, and I think well, why not?
So I joined the throng.
When I'm about 3 feet from him, a tiny 90 year old woman with plastic, blinking Cub ear rings does a total Richard Dent swim move and ends up in front of me, and then she's giving me the evil eye like how dare I invade her space.
Now I feel creepy, so I turn away autographless.
As I'm worming out, three 8 year olds take my place like Cub Fan osmosis.
What was I thinking?