It's the birth of a new Cubs Season! I took a class called "Biology for Art Majors" in college.
Kinda specialized. Lots of picture books and films - you had to really try to do badly.
So it is with a certain expertise that I present this microscopic view of the 2021 baseball season on the day the pitchers and catchers representing your Chicago Cubs report for duty.

I bet it was some time in the '80s that I read an article, I think in Esquire magazine, about this day.
Believe it or not, there was a time when the vast majority of people had never heard the term "Pitchers and Catchers Report", unless some sports guy on the news said it (only it sounded like it was just part of a sentence so you had no idea of the actual significance).
And that article, MAN I wish I had it still, was gorgeously written and did such an amazing job of dragging your brain from the reality of what was going on outside to the possibilities of Spring.
By now you've read a thousand poetic musings that try to do the same thing, but whatever.
I've been keeping track of the snow in Chicago with my backyard Tablometer.

The amount of snow that's fallen here in Chicago is breathtaking.
And I mean that literally - I have shoveled and blown snow to the point where I thought, "Good GOD Tim, didn't the weatherman warn you not to have a heart attack shoveling snow?"
Seriously, you gotta stop and breathe every so often or that might happen.
So pitchers and catchers reporting could not come at a better time.
The last couple days, actual Chicago Cubs have been flying into Phoenix Sky Harbor airport.
If you were hanging around there, you might have seen Alec Mills and Dillon Maples waiting to split a cab.
And Maples might say, "Damn Alec, if I had 1/100th of your control, I'd be the best closer in baseball."
And Mills might say, "If I had your slider, I'd win 20 games easy."
Then Maples would say, "Then we could have somebody named Charles come pick us up in a Rolls."
It's definitely a strange time now, with a certain 4 Cub starters all showing up for P&CR Day, only for other teams.
But the Padres train in Peoria (AZ), so it's possible that Yu Darvish was able to at least bump elbows with Kyle Hendricks and say good luck.
Maybe Willson Contreras flipped a suitcase 50' in the air.
Who knows?
And who knows what'll happen?

Jed Hoyer's trying to make this rebuild be less painful, or better than, say, 2013 - sort of the middle of the last time the Cubs were in rebuild (or teardown) mode.
That rotation was a mix of Matt Garza, Travis Wood, Edwin Jackson, Carlos Villanueva, Jeff Samardzija and Scott Feldman. In July the Cubs would trade Feldman for Jake Arrieta (he'd go 4-2) and Pedro Strop.
The Cubs would win 66 games.
So yeah, this team will be better than that one, and maybe even win the Central again.
Maybe Mr. Covid will begin to take a back seat, and Cub Fans will begin taking seats at Wrigley, and Mr. Ricketts can find more money to spend on players again.
This is definitely a year of uncertainty, BUT... at least it's finally begun.
The birth of a new season.
Go outside (even if it's 27 below wind chill) and take a deep breath of Baseball.
Ahhh.
That's better. 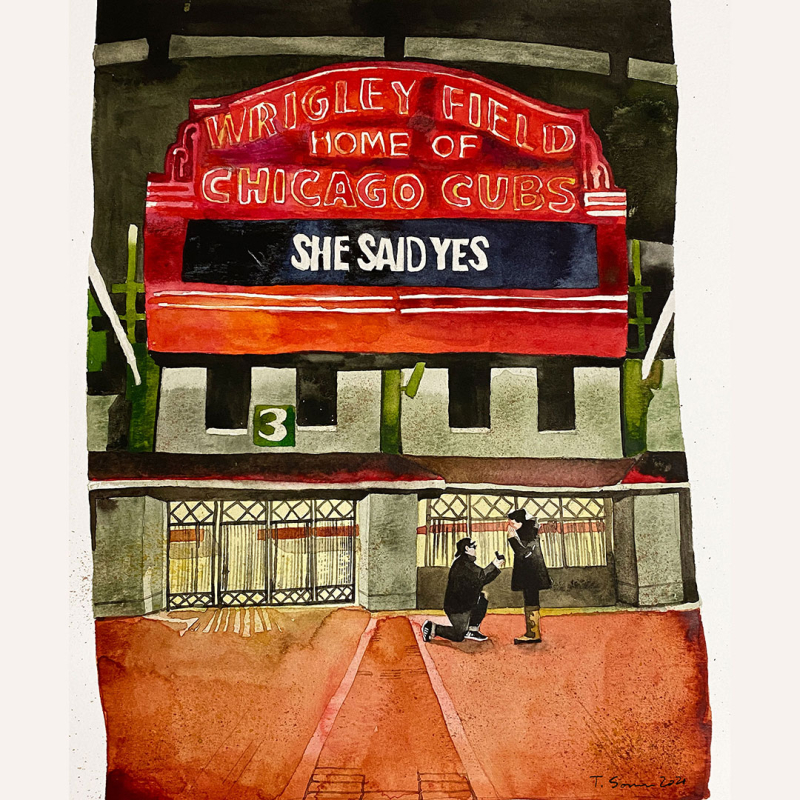 A Winter Smile: Jake Arrieta is Back.

It's been a long winter lacking in smiles, hasn't it?
All we've been doing is waiting for the number of players from the World Series Championship team to continue to dwindle.
This Jake Arrieta rumor had been around a pretty long time, so long that I figured it was over.
Then, I didn't get an alert from MLB.
Nobody told me.
I turned on the news and found out he's coming back.
How remarkably old school.
Now, nobody expects this Jake to be THAT Jake.
In fact, you could argue that this is just a shameless attempt by management to sort of.. placate us faithful.
Whatever, it brings a smile.
Hard to do during this long, bleak, freezing and snowy stretch. 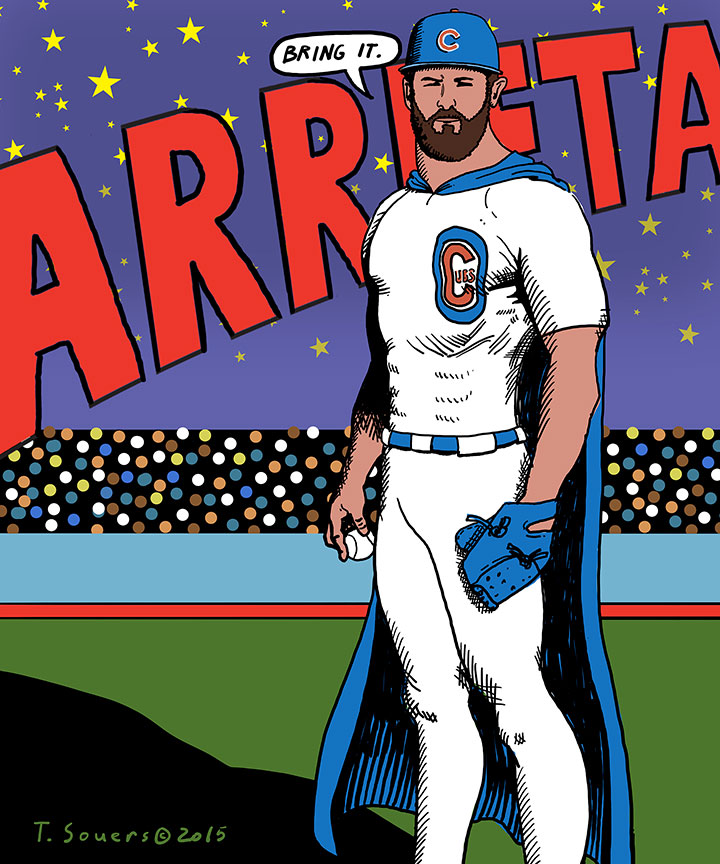 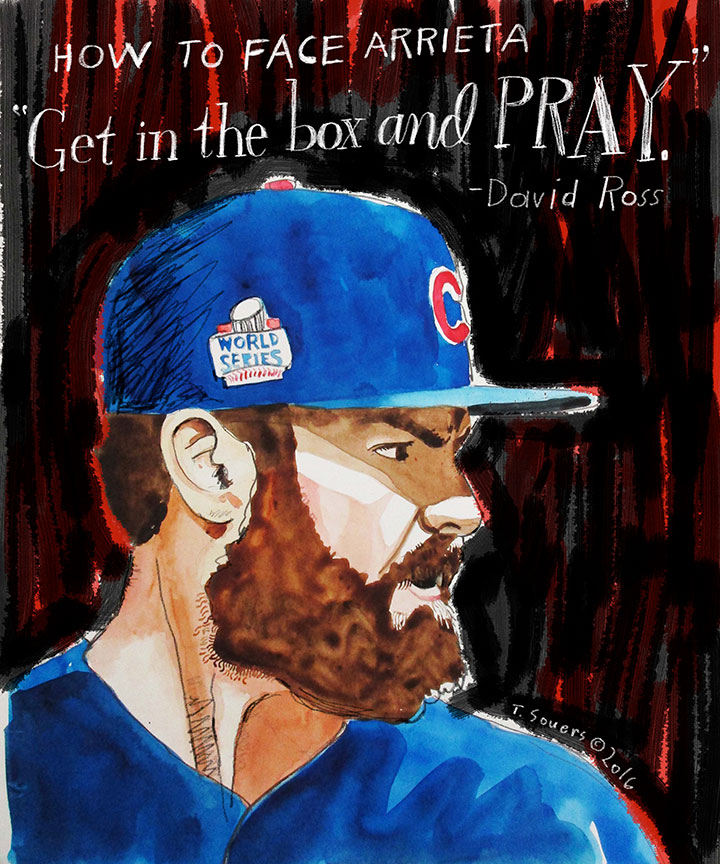 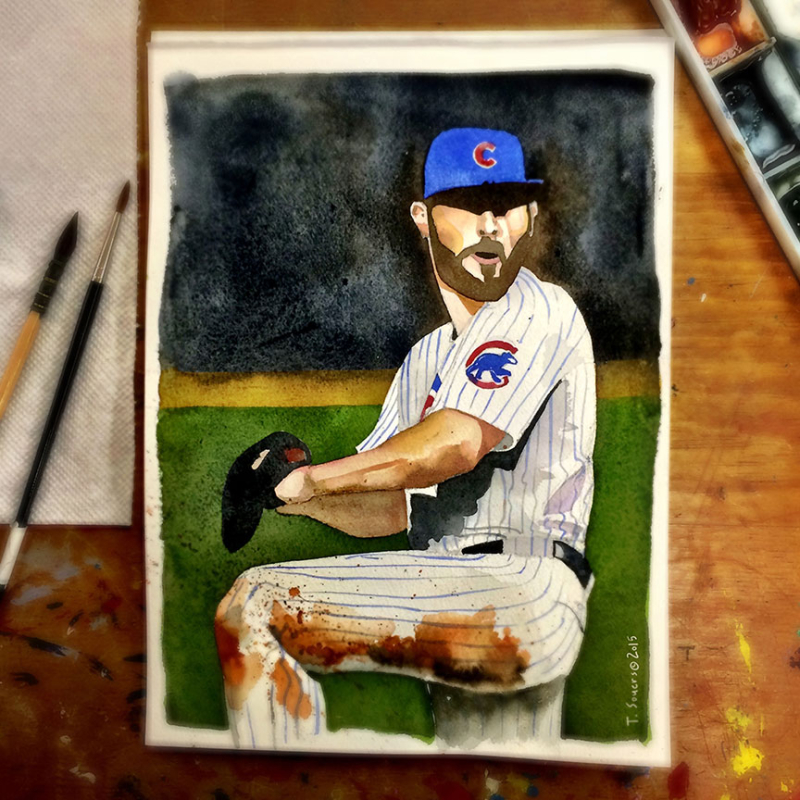 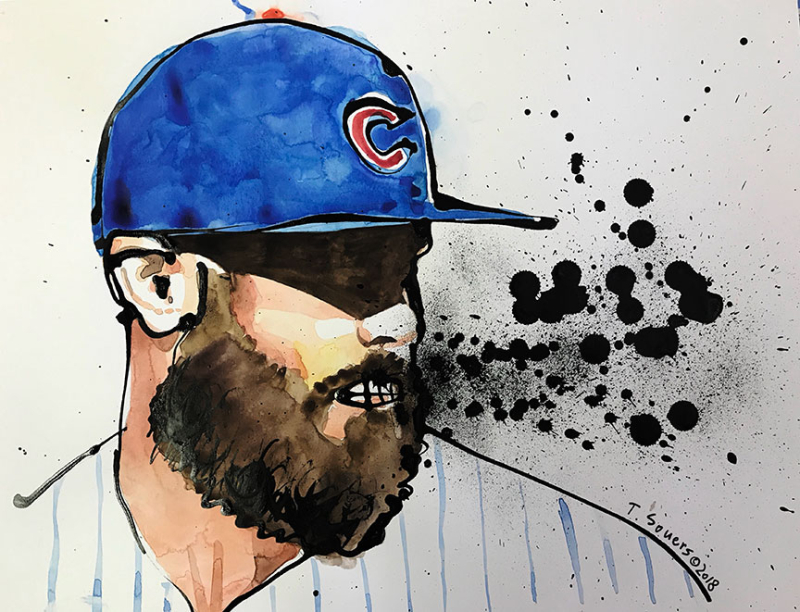 And now... it'll be 4 days til Jake reports along with Kyle Hendricks, Willson Contreras, Alec Mills, and Adbert Alzolay.
There is still 17" of snow on my table-ometer out back, maybe more by now. 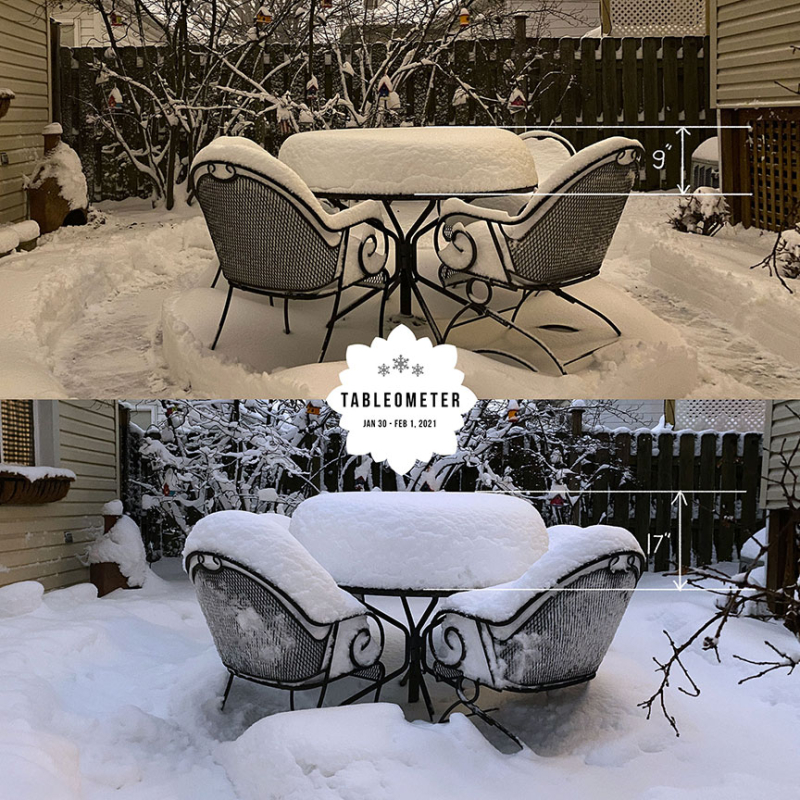 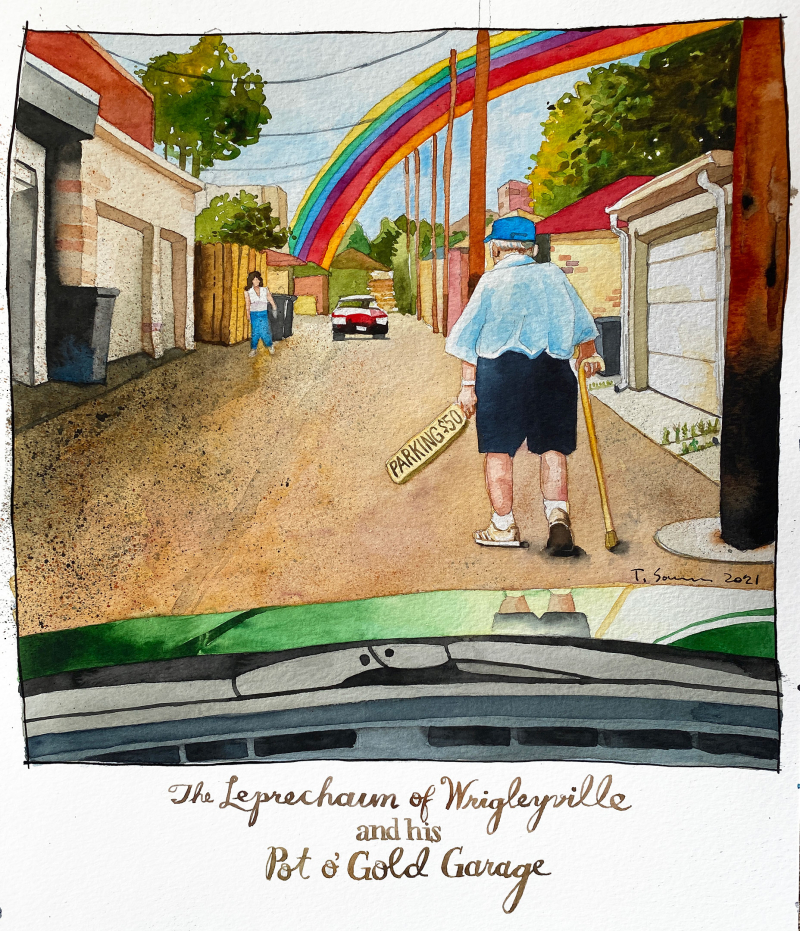 Yesterday the Cubs signed Kohl Stewart, who was originally picked 4th (just two behind Kris Bryant) in the 2013 draft, but has a career (okay, 62 innings) ERA of 4.79.
Semi-yawn. I mean, the Cubs have sort of beat my Cub Fan Brain with a baseball bat lately, so I'm not expecting much at all.
A super low risk (I think $700,000 for next year) guy who... the Cubs have had success in the past with taking guys others have given up on and made them into something. So who knows, maybe Stewart turns into something.
And now... this signing of Joc Pederson (pending physical)?
Kinda shook me awake just because he's got a name.
One year, $7 mil, and surely the Cubs told him he'd start, which he wasn't doing so much in LA.
A couple years older than Ian Happ, I bet trying to re-define his career.
So... on one hand this is FANTASTIC.
On the other it's kind of weird.
He's a lefty bat mediocre outfielder with the same kind of numbers as Kyle Schwarber.
I thought the new thing was contact.
Guys who get on base.
I mean, this time of year nobody knows what Jed Hoyer's plans are, really. Does this signing make that picture any clearer?
Don't think so, but it's a positive sign.
The Ricketts' have supposedly increased the budget for next year (I love Brett Taylor at Bleacher Nation and he's got a good take on this).
There's chatter with the Cubs being interested in Chris Archer, Jeff Samardzija, and maybe even Jake Arrieta.
None of those are Nolan Arenado, who the Cards are supposedly talking to, but whatever.
(BTW, the Cards just signed Adam Wainwright to another year at $8 mil.)
I guess I was feeling like the Cubs were resembling a flat balloon, and maybe there's a little air blowing in now.
So... awesome.
The Central is supposed to be rotten next year, but even so, it would be nice to continue being atop the division.

The painting at the top - if you recognize it that's because it was in one of my old sketchbooks. I'm taking some old sketchbook stuff and making big paintings out of it. Fun.
The guy in the painting passed away years ago. I last parked in that alley in 2019. Will again, too. Those alley parking people... most think they're creepy robbers. But I think they're part of a dying culture around Wrigley, and I'm happy to help them stay in business.

Kyle Schwarber is now a Nat. 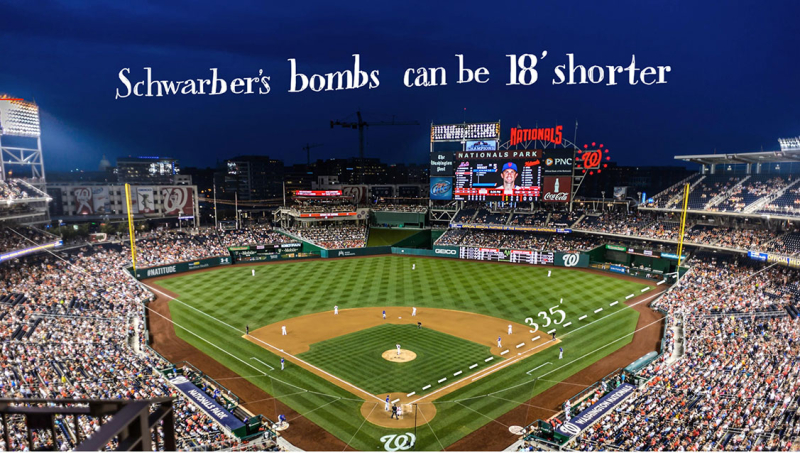 Kyle Schwarber signed with the Washington Nationals for 10 mil/one year.
Had he stayed with the Cubs and gone through arbitration, the projected numbers were "somewhere between $7.01MM and $9.3MM."
From MLB Rumors: "The fact that Schwarber surpassed even the highest arb projection in landing $10MM from Washington is indicative both of how much interest there must have been in his services, and a sign that the Nats are taking more stock in some of Schwarber’s advanced metrics than his bottom-line 2020 numbers."
I guess I was surprised he didn't go to an AL team, but knowing the guy... his determination, coming back from injury, the weight loss, and also how hard he worked at playing left field... I bet he wanted to stay in the NL.
And Nats park has the added benefit of being just 335' down the RF line while it's 353' at Wrigley.
You know I'm a Cub fan but I sure hope Kyle hits 50 bombs and keeps throwing missiles from left field so he can politely, in the privacy of his own home (because I figure that's how he'd do it), lift a middle finger towards Chicago.

And people are going nuts for the Kris Byrant to the Mets rumor.
Should that happen, well, they say the Cubs want the Mets top catching prospect in return. Which means... of course we all have heard this but would make a Willson Contreras trade way more sensible for the Cubs.

Tell you what.
I'm just not expecting the Cubs to look anything like we've gotten used to over the years.
You should, too.
That way, well we can do that private little cry, but maybe then we won't be so shocked when we're looking at a team that has a bunch of Nate Schierholtzes running around.
Tell you something else, I do not envy Jed Hoyer's position right now.
I can't get this video out of my head (go ahead to about 1:35):

Old Joe makes perfect business sense here.
But now, the part about "selling every ticket, to every game, win or lose" seems not such a sure thing.
And I imagine a phone call between old Joe and young Tom that went like this: "Hi Tom. Our business model is broken, so get rid of the parts that cost the most."
Right after that, Tom called Theo, Theo turned into Jed, and here we are.

Don't want to leave you on that note because when you're done here, there are so many other headlines to depress you, so... here's some other stuff I hope makes you smile. I did these leading up to Jan 1, 2021. 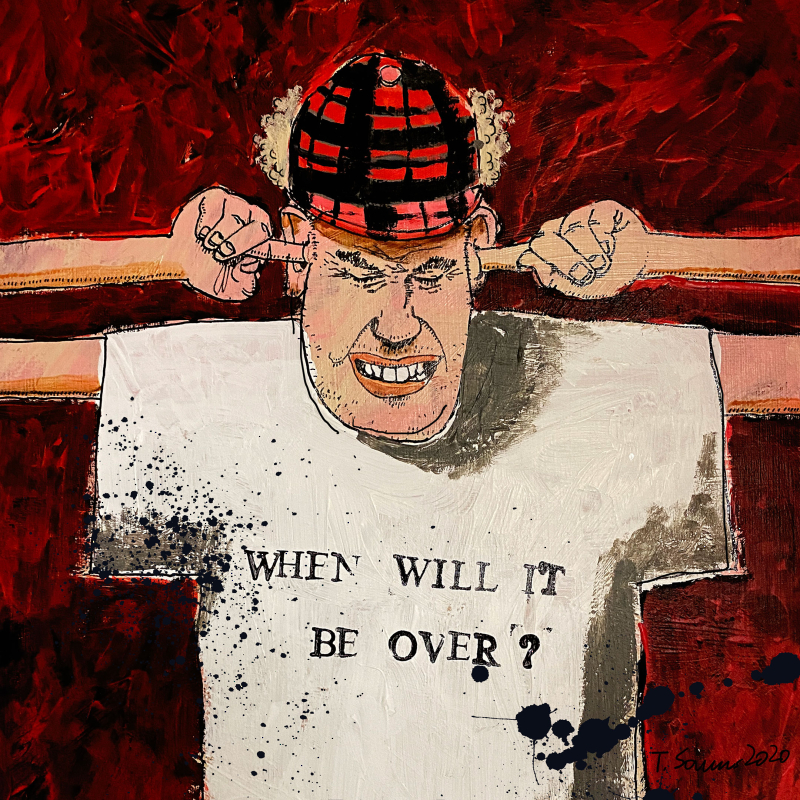 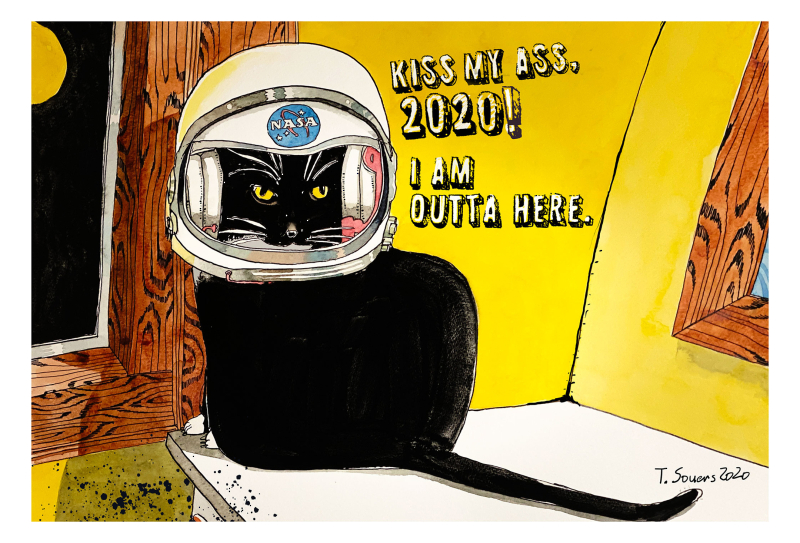 Have a good one, and go Cubs.